Where this stamp had been for the first eighty years of it life will never be known.  A young man from Pennsylvania inherited this stamp from his father who thought it was a forgery.  The son joined the ISJP in March of 1973 and had the stamp expertized in May of that year. The stamp was expertized by Dr. Varro E. Tyler who headed the ISJP expert committee at that time. Dr. Tyler and several other committee members in Japan and in the U.S. concluded that it was genuine in all respects. This means that an entire sheet of 40 with inverted value existed at one time.  Since it is genuinely used, the other 39 copies of the invert may have been used and destroyed.

Subsequently the stamp was sold by a US Auction house in Tokyo of December 1973.  It was illustrated in color on the cover of the auction catalog and sold for $75,000.00. 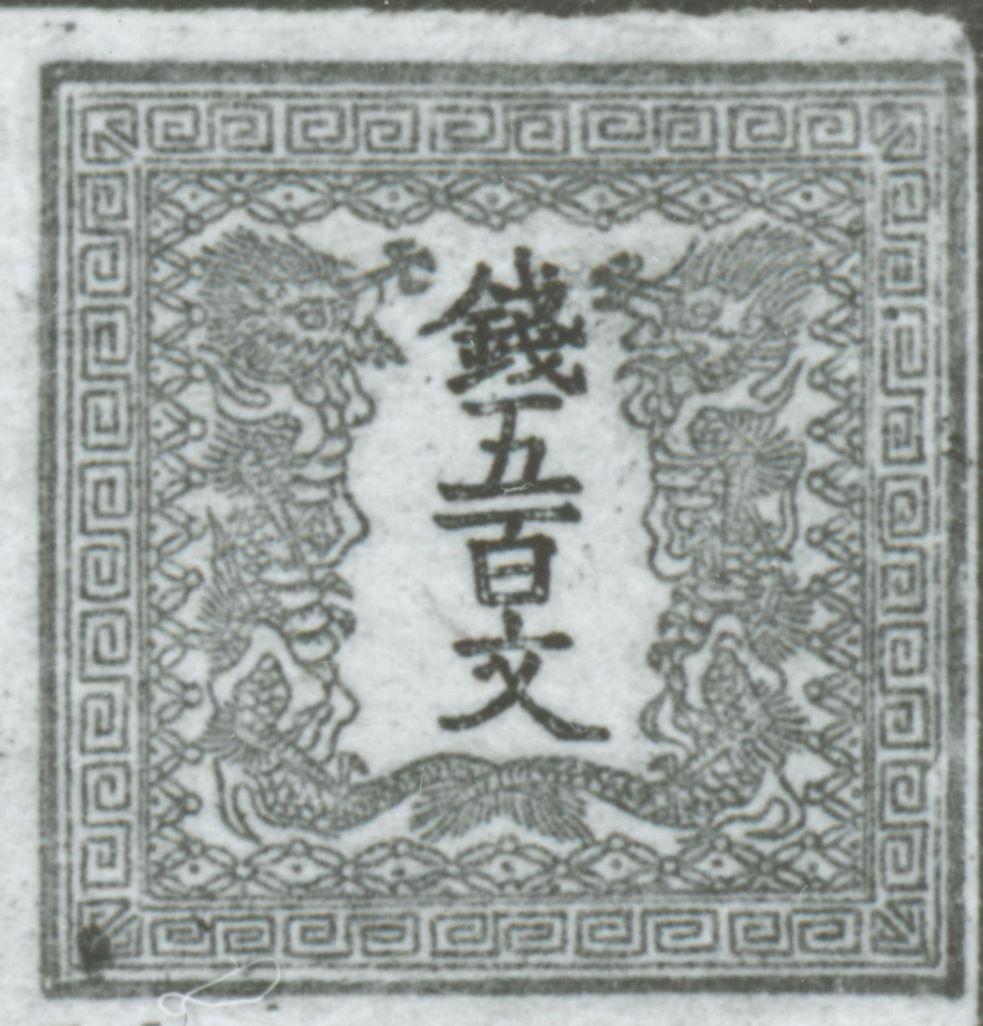 Photo of a genuine 500 mon, plate 1, position 8 without the value characters inverted. 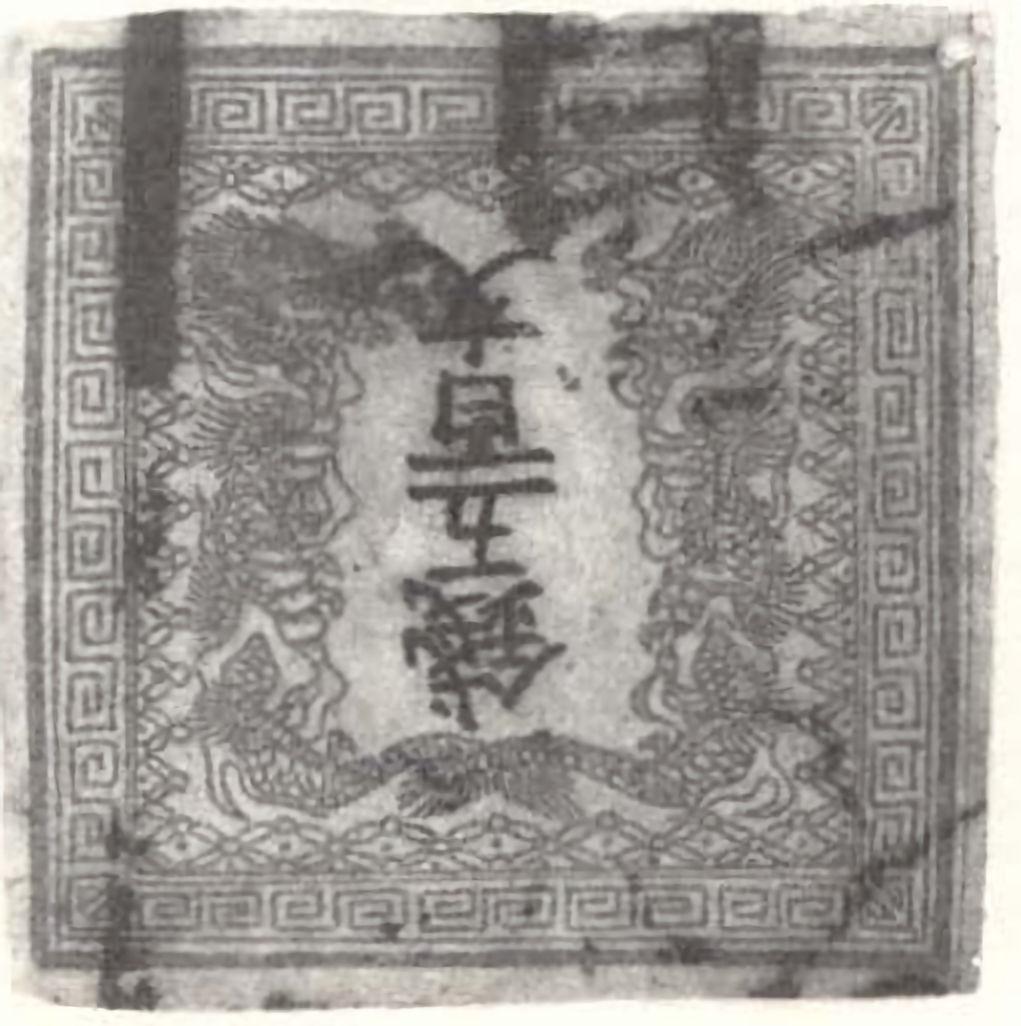 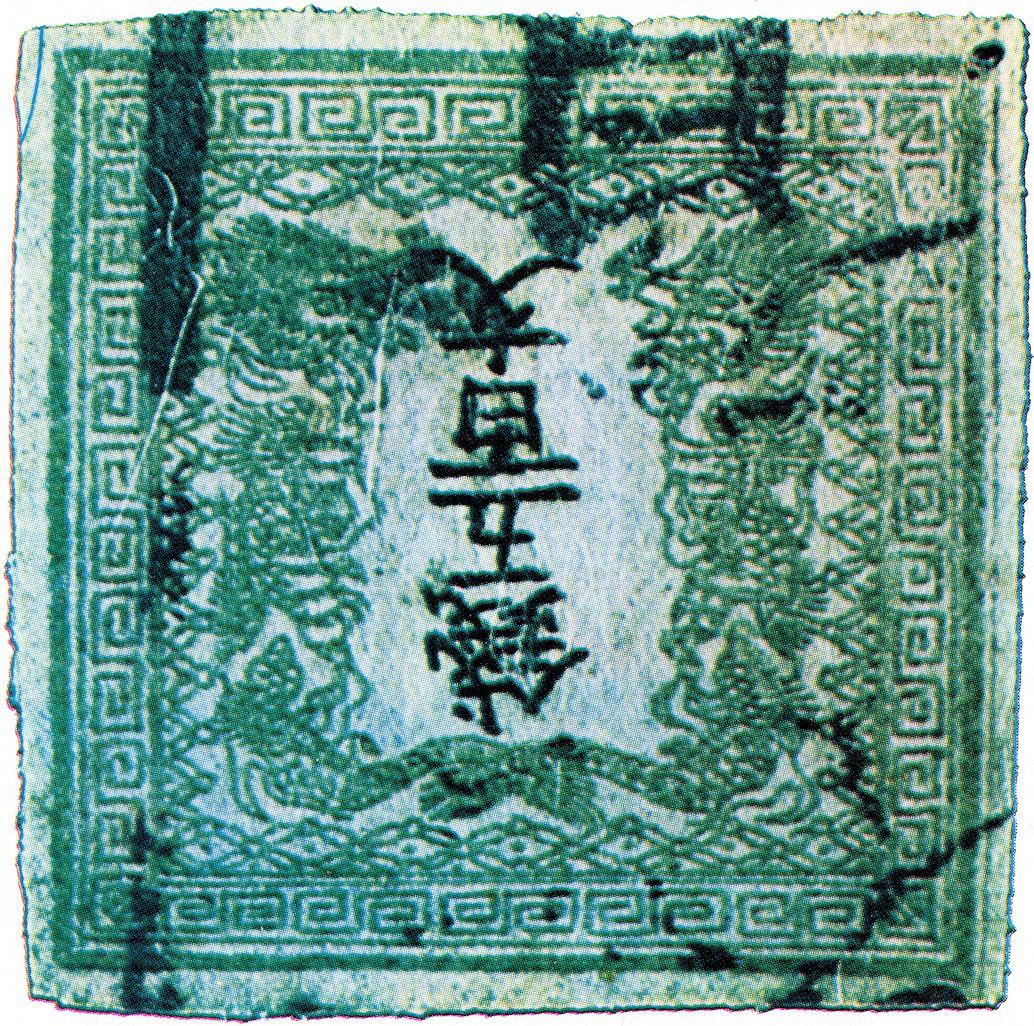 This color illustration is from the first auction of this stamp on 9 December 1973 in Tokyo.

A few months after the sale, in early 1974, Yashiro Yoshio of Matsudo City made a forgery of this rarest Japanese stamp.  The forgery seems to have been made from the original, but there are clearly forged parts of this reproduction.  The original is a single stamp soaked from it original piece.  Only a small part of the original cancel is on the stamp and in the same inverted position as the value characters.

The souvenir sheets privately made by Yashiro Yoshio have a block of four of a fake invert on at least three of the different sheets.  Two of the sheets are cancelled with a fake cancel on the right pair of stamps side by side with an unused pair at the left.  The difference in these two sheets is the type face used for the inscription at the top of the sheet.  On the third sheet all the stamps are presented as unused. 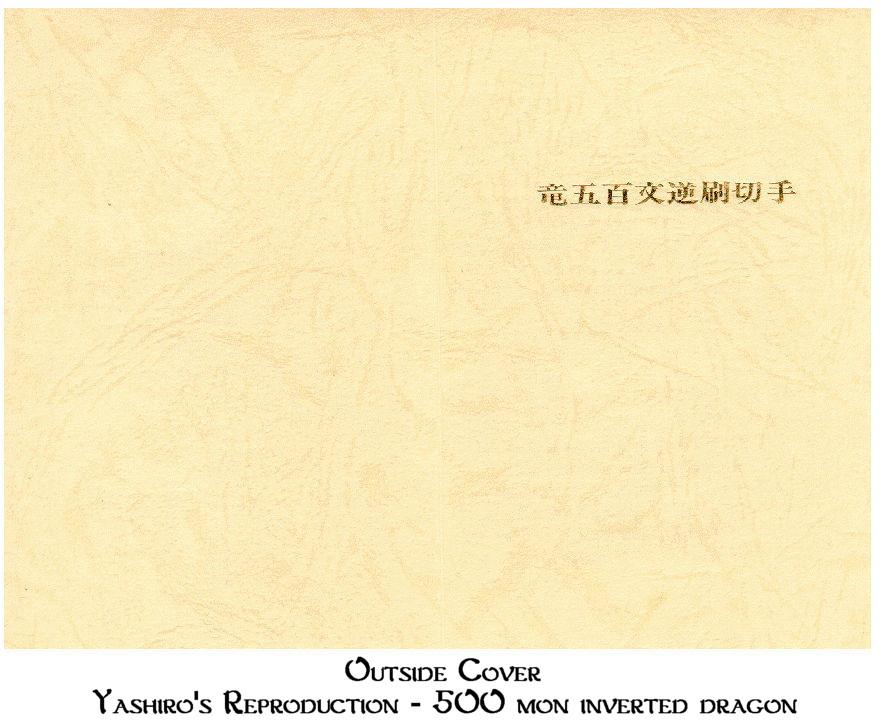 Outside top of folder reads: “Dragon 500 mon inverted-printing stamp” as does the inside folder and the inscription above the stamps on the souvenir sheet itself. 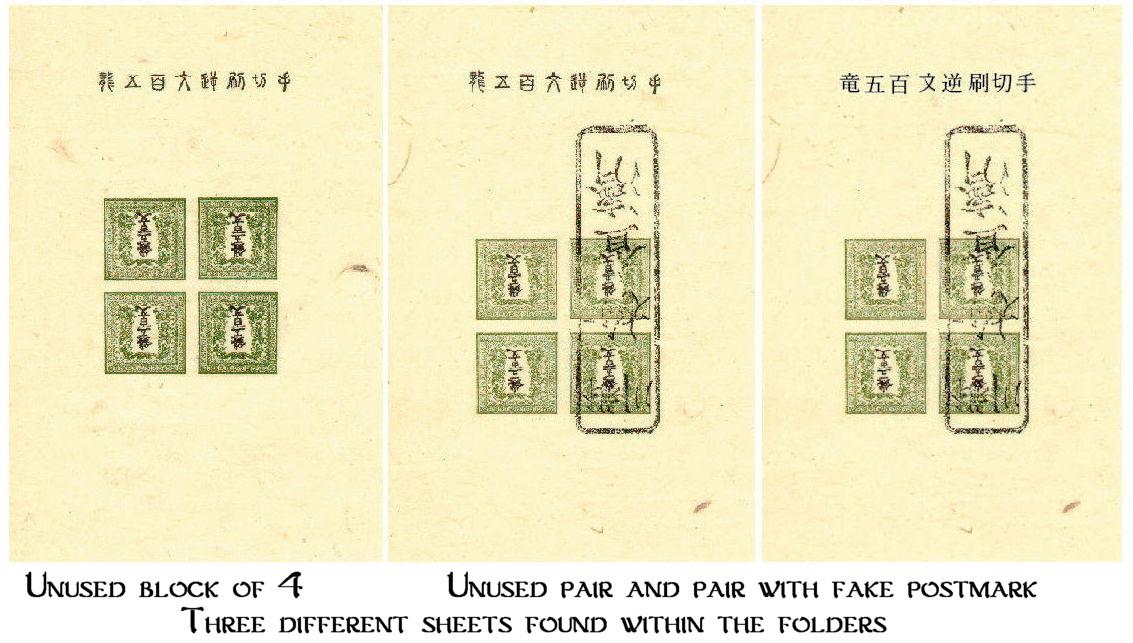 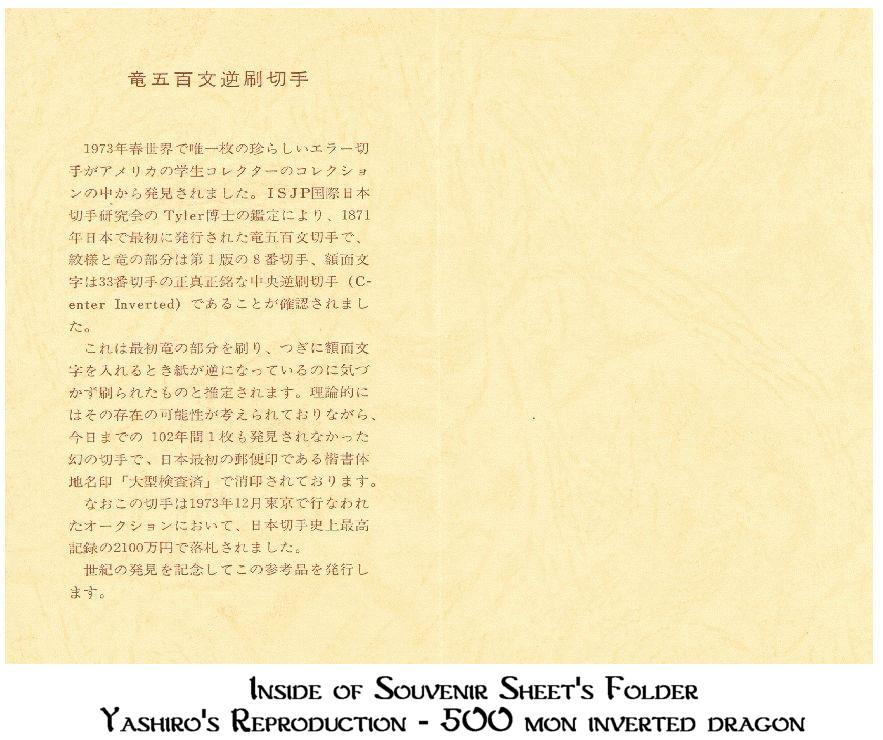 Inside text describes the history of the genuine invert and mentions its authentication by “Dr. Tyler of the International Society for Japanese Philately”, as well as its sale at auction for the price of 21,000,000 yen ($75,000.00). 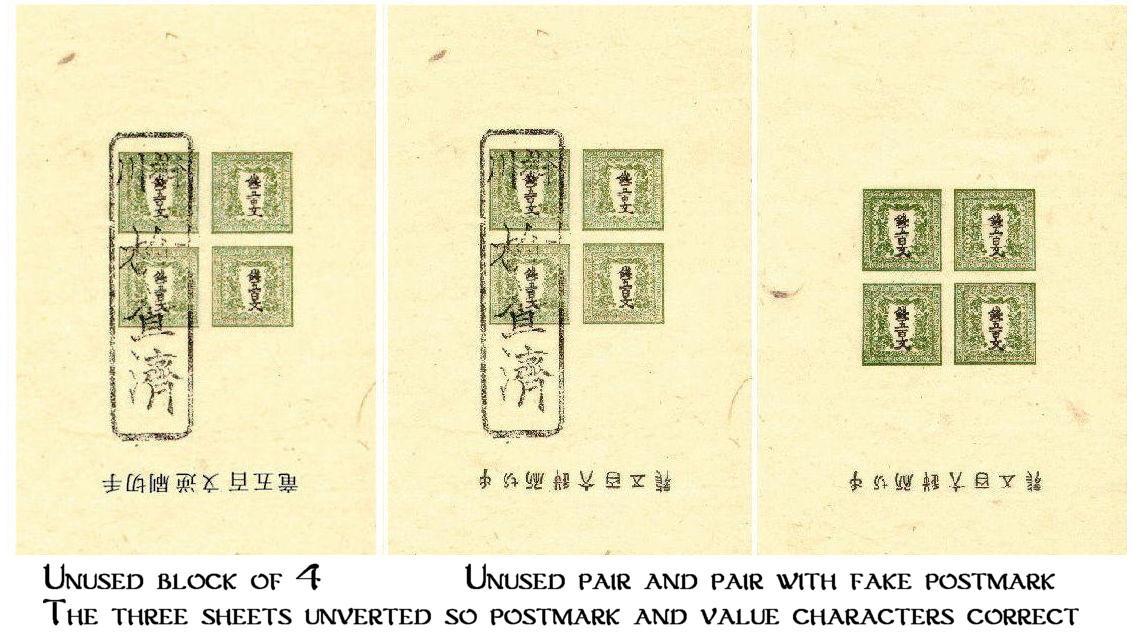 Souvenir sheets inverted so that the fake postmark and the central value characters no longer inverted.  The dragons are inverted.

Inscription above stamps says: “Dragon 500 mon inverted-printing stamp” .  The whole block of four is a counterfeit with a counterfeit postmark.  The placement of the postmark implies that the four positions represent positions 7, 8, 15, and 16.  But there was no effort make to reproduce the correct characteristics of these four positions.  All four positions on the forged souvenir sheet seem to be copies of a single original counterfeit.  The paper is thin wove and the color is not the same as that of the genuine.

The top of the fake postmark reads Kakegawa (right to left) 川掛 [the post office name].  From top to bottom it reads 檢査濟 kensazumi [examined].  The only readable part of the genuine postmark is a small section from the center of that is enough to identify the kensazumi marking.  Kensazumi is a common marking found on many of the early postmarks of this time period. It is certainly possible that the original stamp was post marked in Kakegawa, but there are many other cities that used this kensazumi cancel. 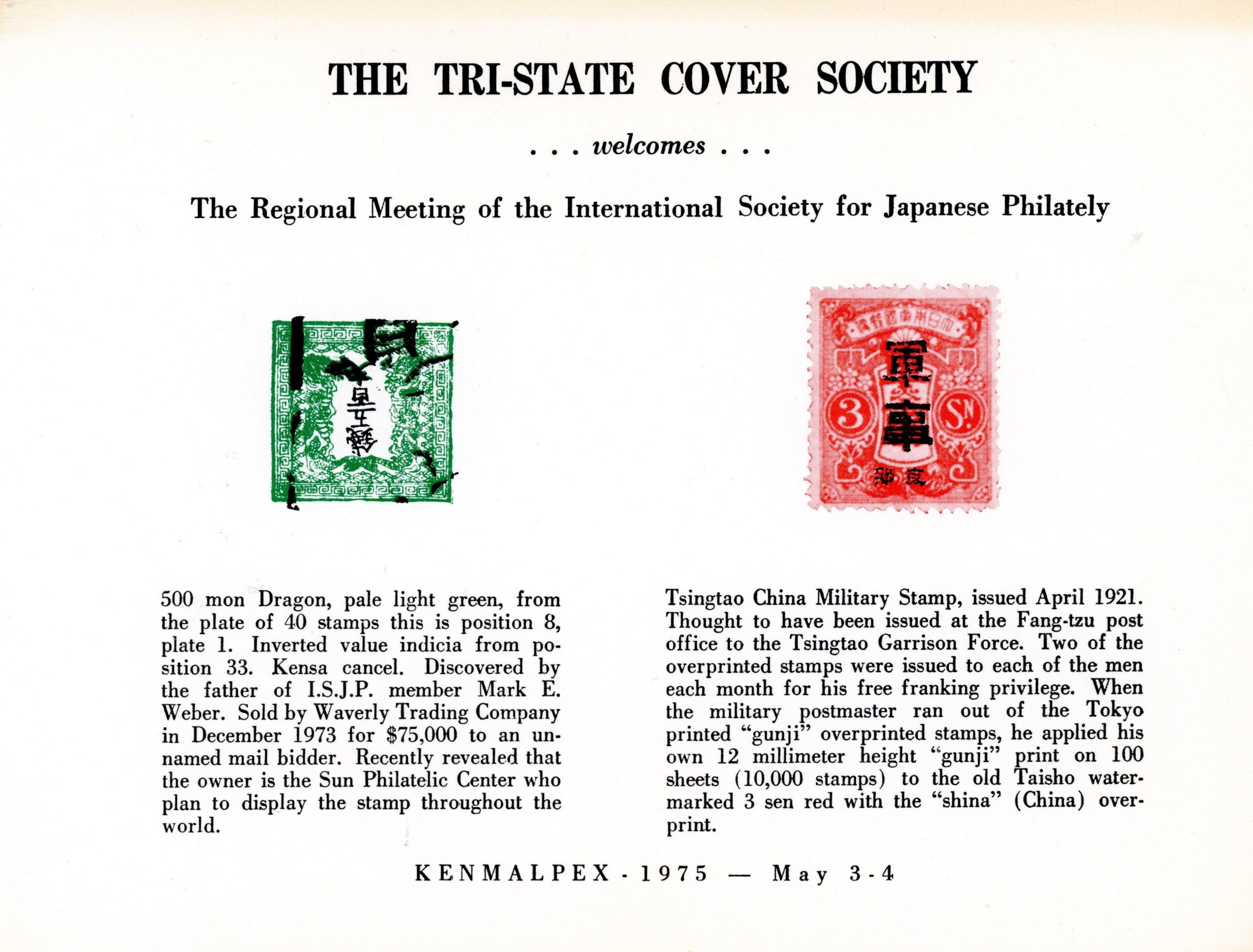 This souvenir card has a reprint of the 500 mon invert.  However this reprint is on heavy card stock and the stamp reproduction is much larger than the genuine stamps.  It is unlikely that a realistic forgery could ever be made from the two stamps reproduced on this card.

More information about this invert and its forgery is found in Japanese Philately: