In 1954, the Japan Stamp Center in Tokyo produced a series of Dragon forgeries from engraved dies.  The same dies were used for the mon stamps and for the sen stamps.  Initially the printing was on white laid and wove paper.  The mon series on wove paper is illustrated here in black & white.  The Japan Stamp Center was a private firm.  [Anyone having these forgeries and willing to share scans of them, please send me a comment in the box below!]

These black and white scans of photocopies are not shown with any scans of genuine copies because there is no way of knowing whether an inaccuracy is the result of a poor photocopy or occurred in the original forgery. 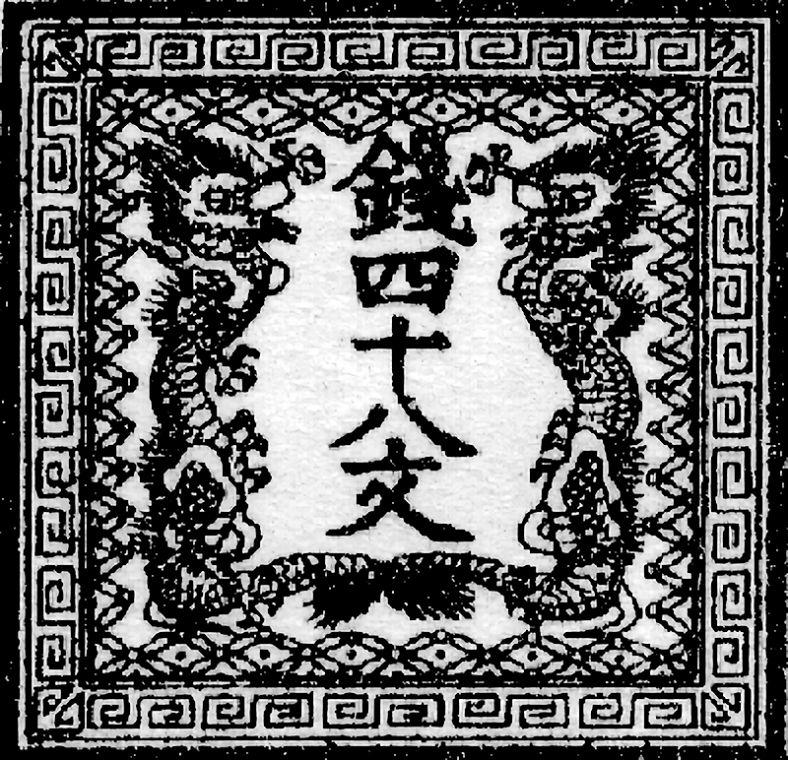 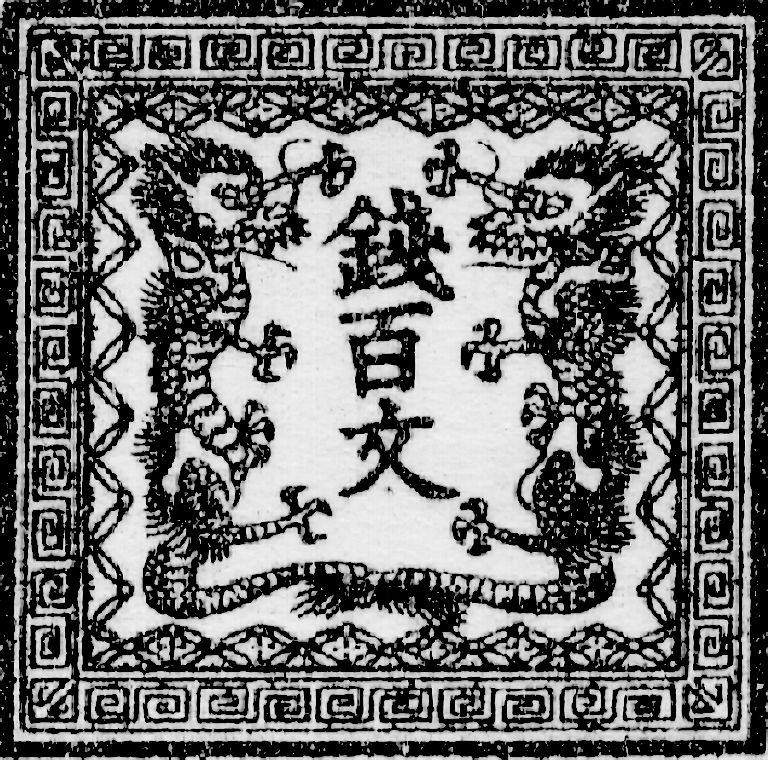 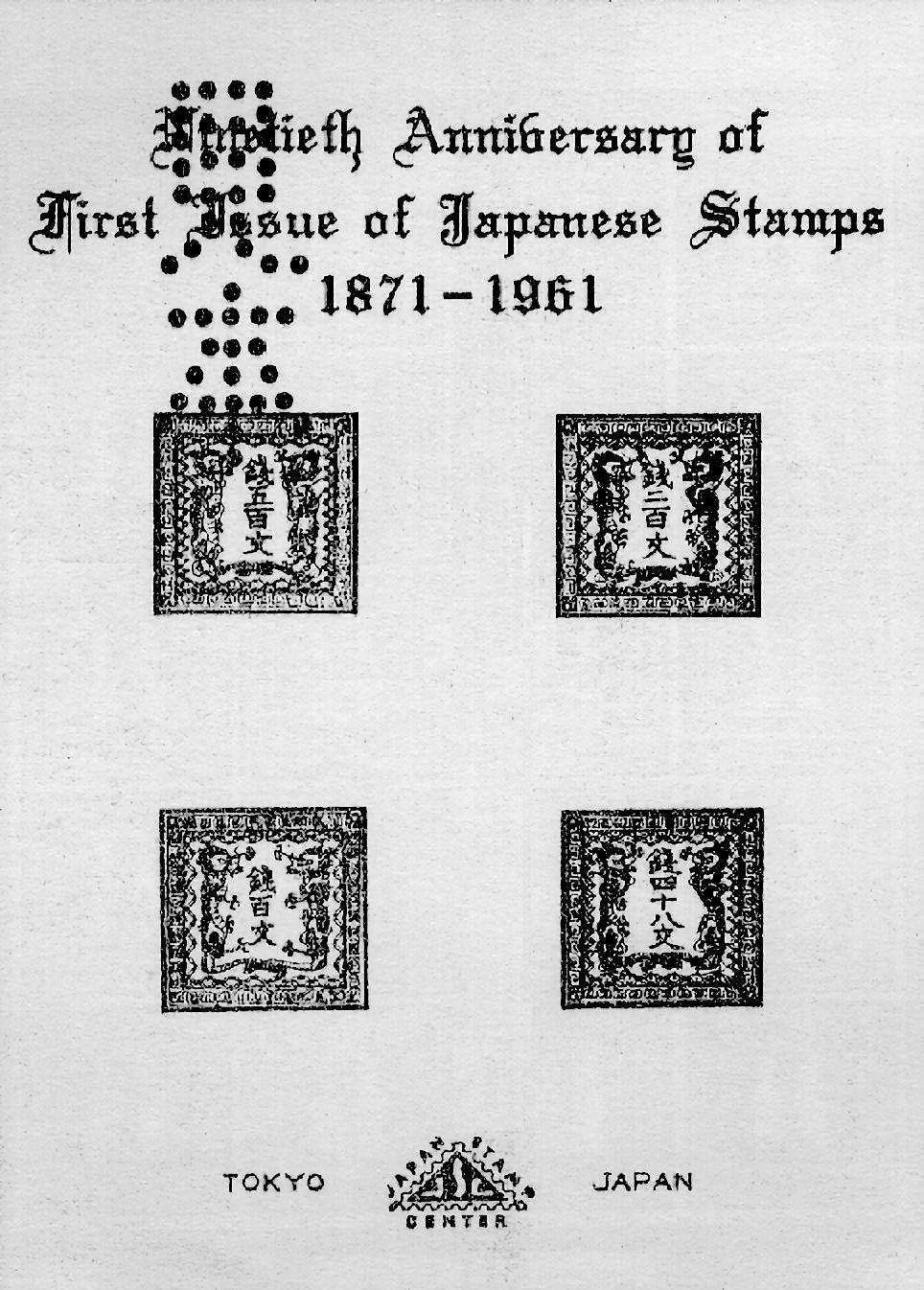 Later,  in 1961, the same four denominations were reproduced on a small souvenir sheet reading at the top in English: Ninetieth Anniversary of the First Issue of Japanese Stamps 1871-1061.  Some of the sheets were perforated “mihon” in kanji as shown as shown at the left, but some were not perforated.  At the bottom center is the Japan Stamp Center logo with ‘TOKYO’ to the west of the logo and ‘JAPAN’ to the east.  The paper was white.

More sheets (no illustrations available) with different stamps were produced.  A second sheet used the same vignettes as the mon dragons, but used the value indicia of the sen dragons.  All these later sheets have the same top heading, but at the bottom the inscription reads ‘Series No. 2’, ‘Series No. 3’ or ‘Series No. 4’.  Series no. 3  reproduces the 6 sen orange cherry blossom stamp, syllabic ヨ (yo-15).  Series no. 4 show the 20 sen violet cherry blossom stamp, syllabic イ (i-1).  The two cherry blossom stamps that were reproduced are rare.  All of these sheets are about 91 by 123 mm in size.  This is about the same size as the Japan Stamps Publicity Association sheets.  The paper for these later sheets was  heavy  and buff colored, not like the paper of the genuine.

In February 1954, sets of four mon Dragon reproductions made from dies that were privately etched were sold in Japan.  These are high-quality reproductions and could easily become very deceptive forgeries.  The first set sold in early 1954 had narrow margins. Later proof-like copies came with wide margins. Both those with the narrow margins and those with the wide margins were made with the same dies.  Both reproductions are on thin Japanese laid paper, much like several papers used for the genuine stamps in 1871.  The engraving on these fakes is said to be of better quality than that of the genuine.  The sheet below is the advertising card for these stamps.  There are no available scans in color of these forgeries and the only examples available are from black & white print media with its halftone dots, that make enlarged comparison with the genuine useless. However enlargements of the stamps alone are below.

The advertising card at the right says that since a set of genuine mon Dragons “now costs [1954] over 10,000 yen which many collectors cannot afford, these reproductions have been made from dies engraved “by Japan’s No. 1 engraver”.  This superlative implies that the quality of the reproductions was exceptional and other Japanese writers confirmed that to be so.

The large type at lower left said “Price 1,000 yen per set of 4” with no seller or distributor named.  The top of the bottom blank space says “Order from:”,  with the rest of the space for a dealer to insert his own address. 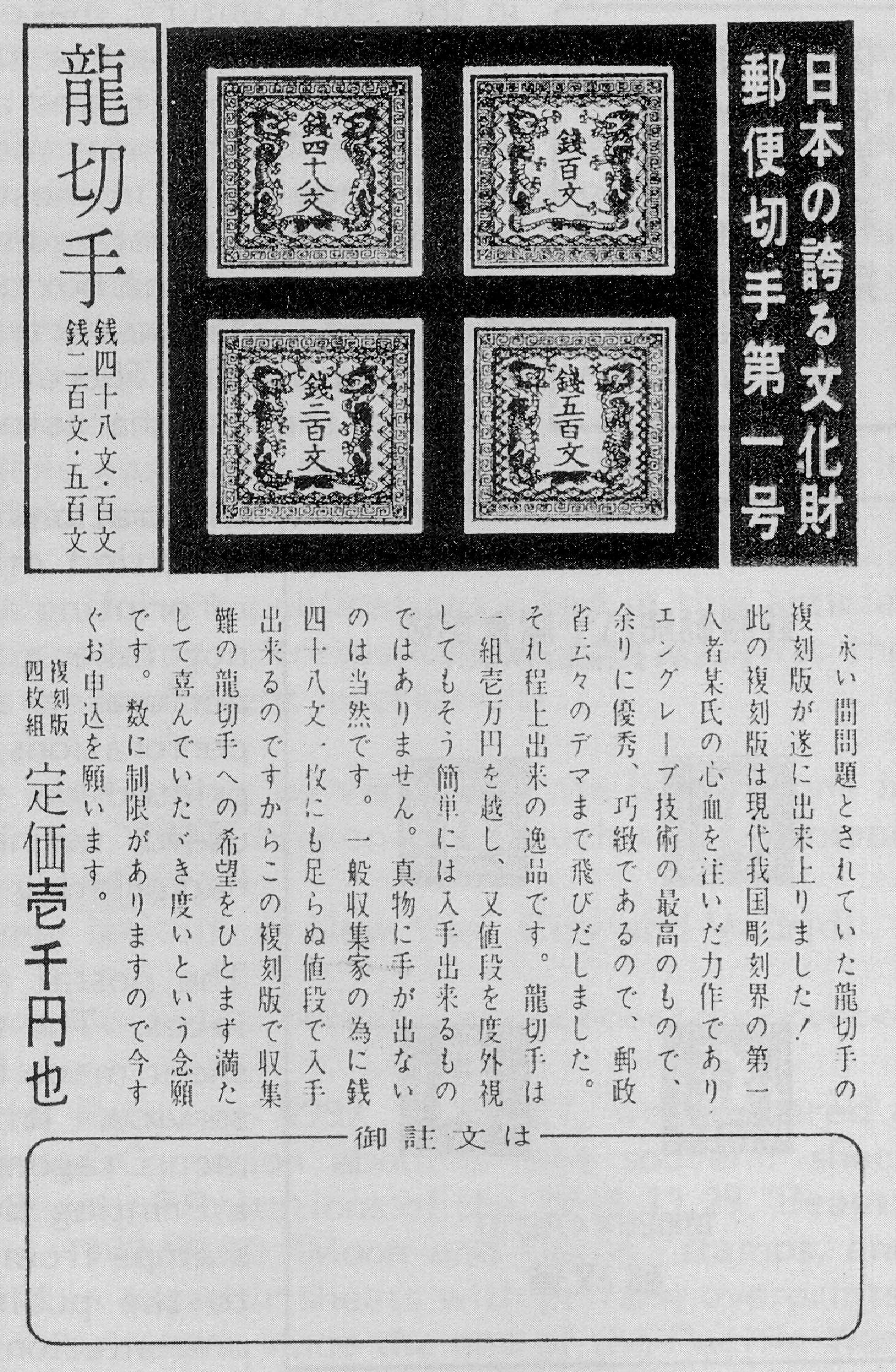 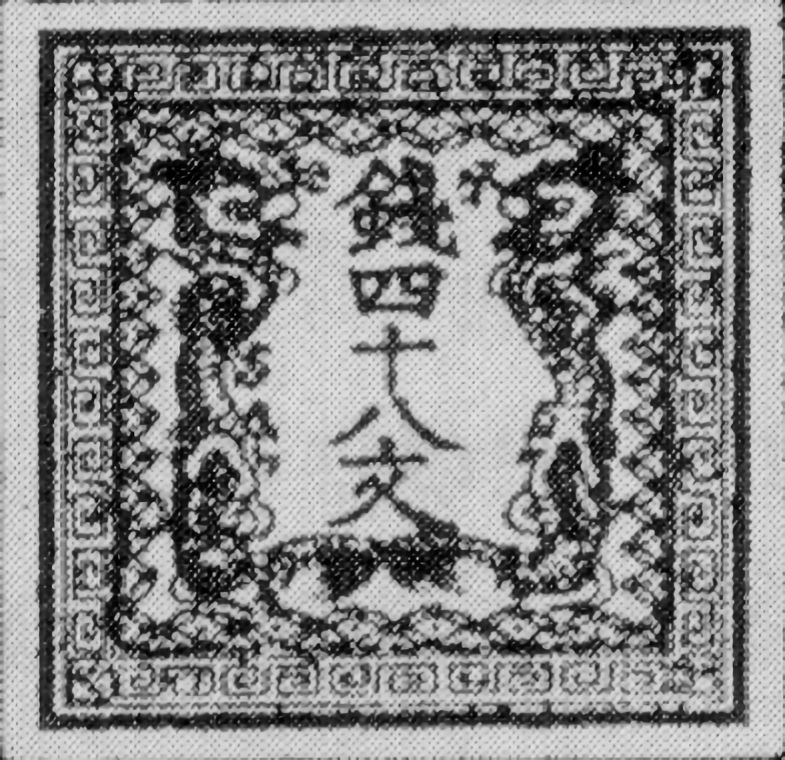 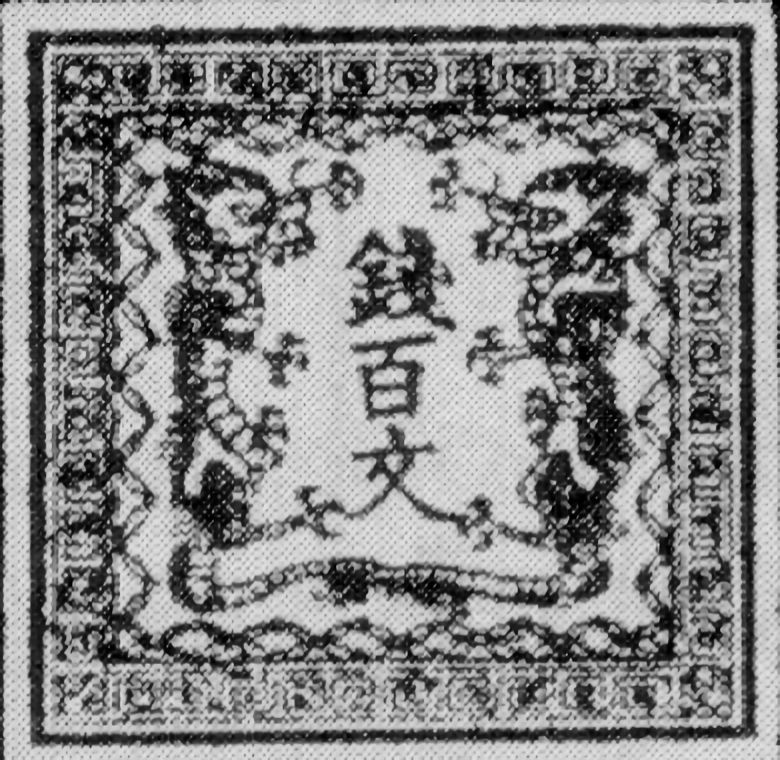 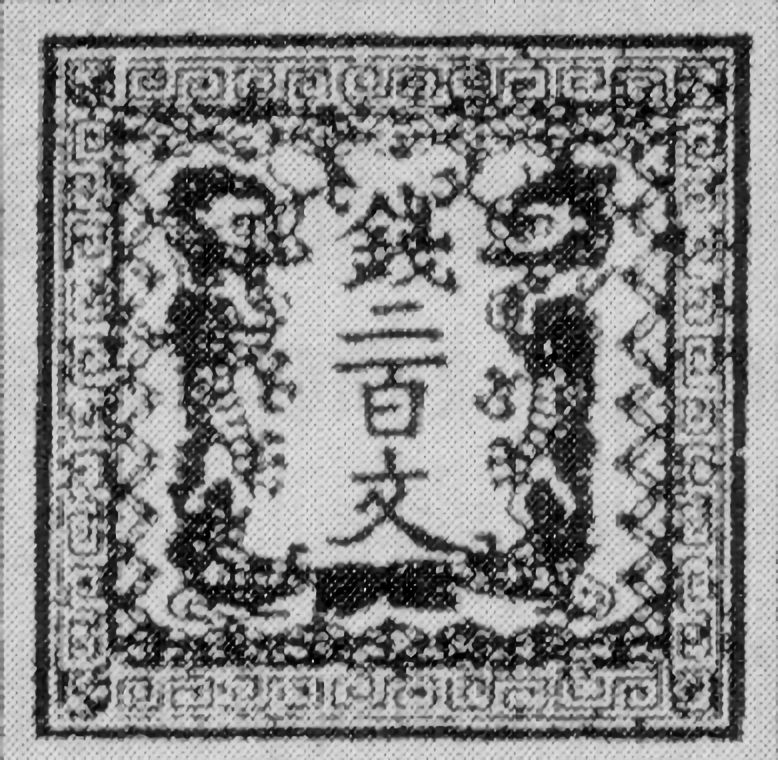 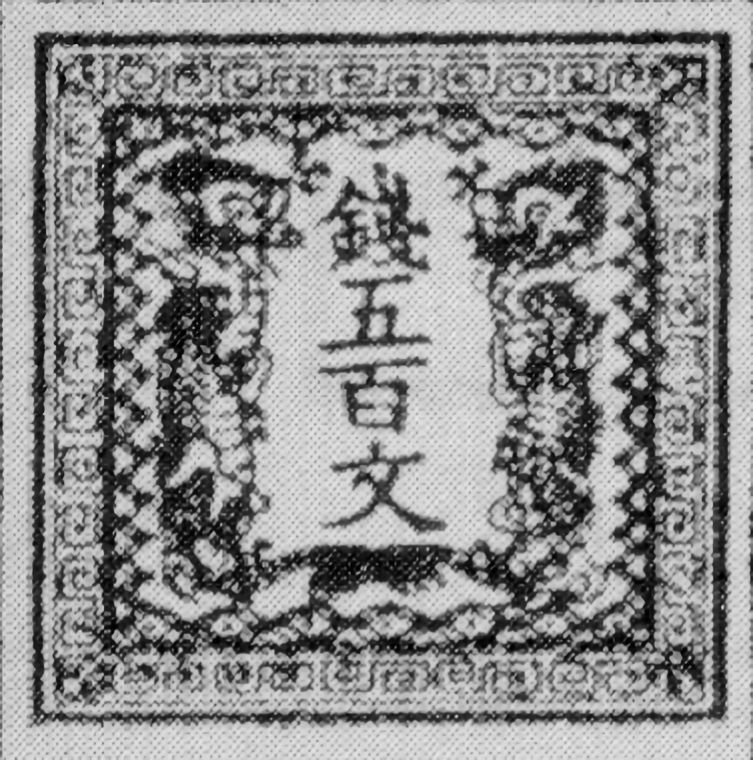 A philatelic society,  Nagaoka Yushu Kai, issued two small sheets (79 by 101 mm) on a white laid paper. One reproduced the four stamps of the Dragon Series in mon values, and the other the sen Dragons. The mon Dragon sheets were dated in 1959 and the sen Dragon sheets in 1960.  These sheets were first described by Spaulding in Japanese Philately, Vol. 16, p. 86. 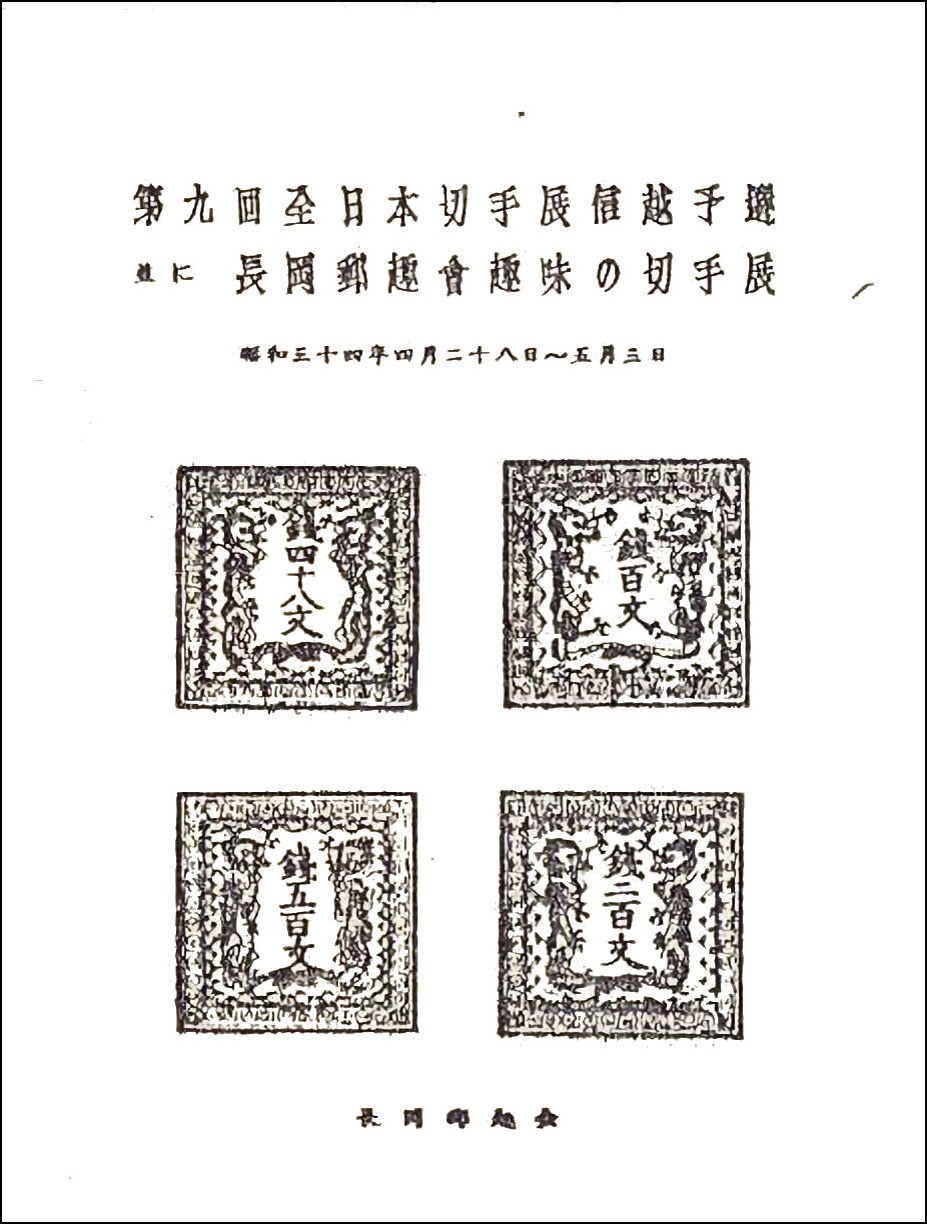 Top line means: “Ninth All-Japan Stamp Exhibition, Shin’etsu (region) Preliminaries”.  The Second line says, “Along with the Nagaoka Philatelic Society Stamp Hobby Exhibition”.  The third line is the date “April 28-May 3, 1959”.  The philatelic society imprint of Nagaoka Philatelic Society is at the bottom  of the sheet. These preliminary or regional  exhibitions precede each annual national philatelic exhibition. The exhibits sent to the national exhibition are chosen competitively at these regional displays. 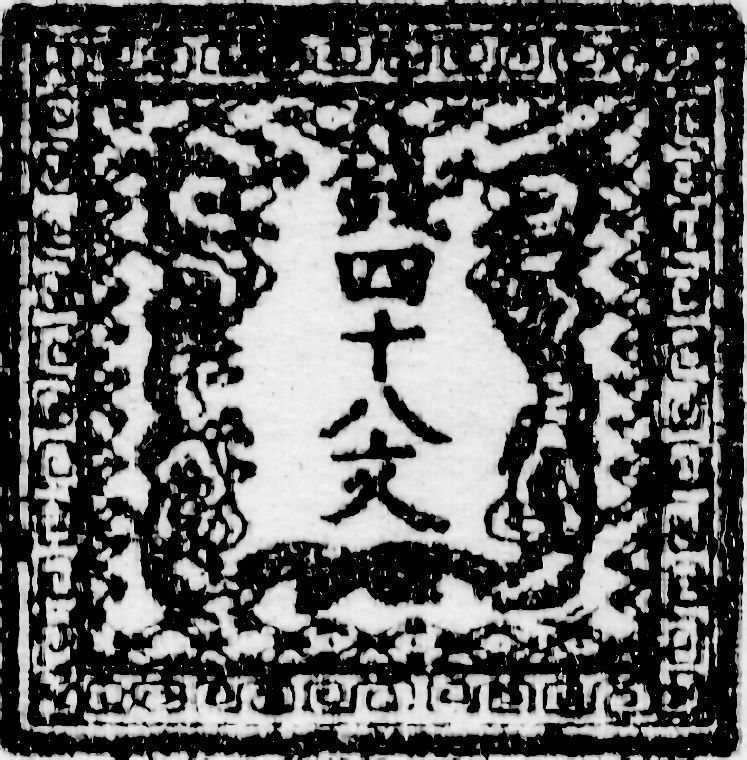 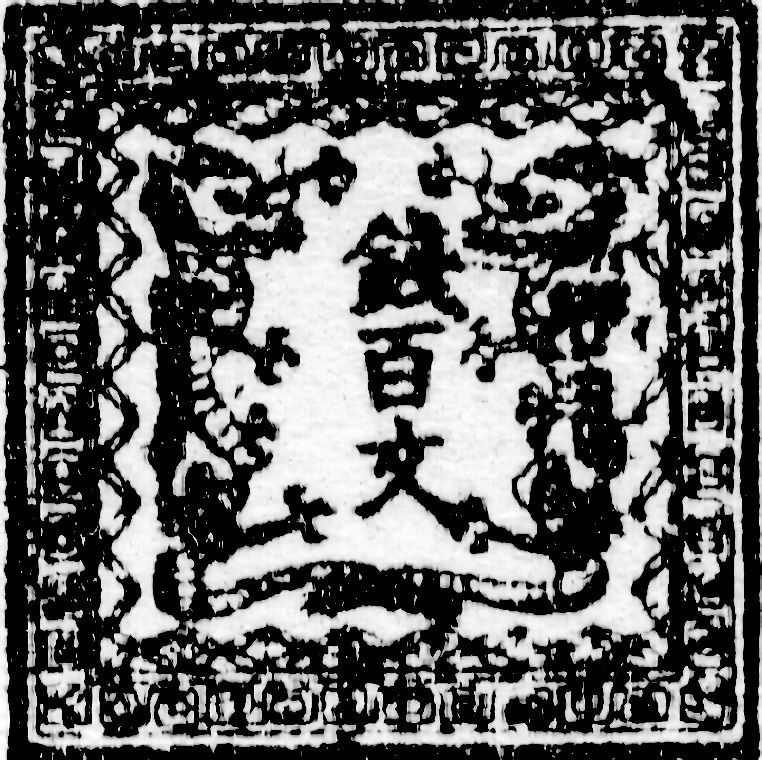 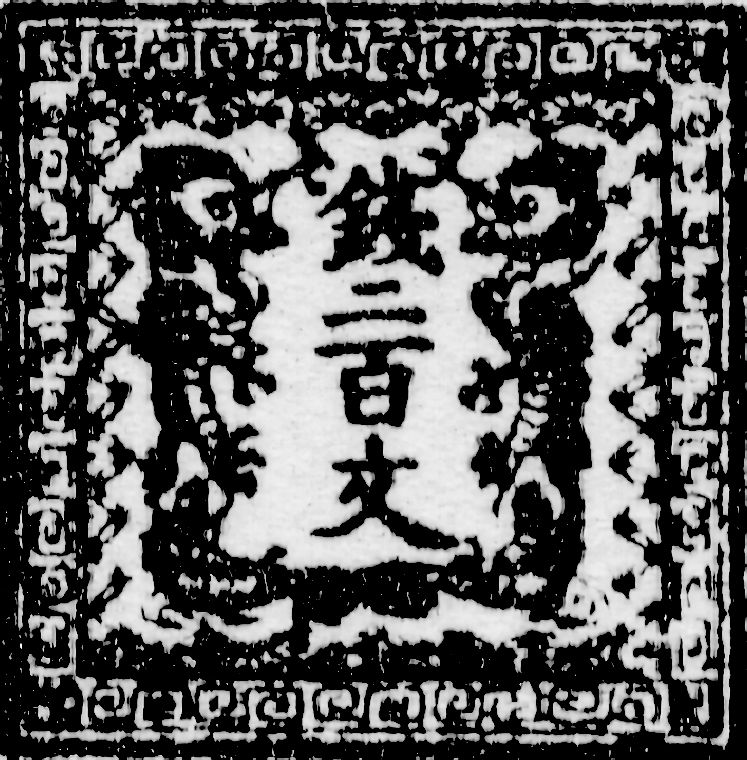 Inscriptions on Sheet at Right

Much like the inscriptions on the mon sheet,  the sen dragon top incriptions means “Tenth All-Japan Philatelic Exhibition, Chū-echi District Display, but the date reads “11-13 March 1960”.  The same philatelic society imprint is at the bottom of the sheet. 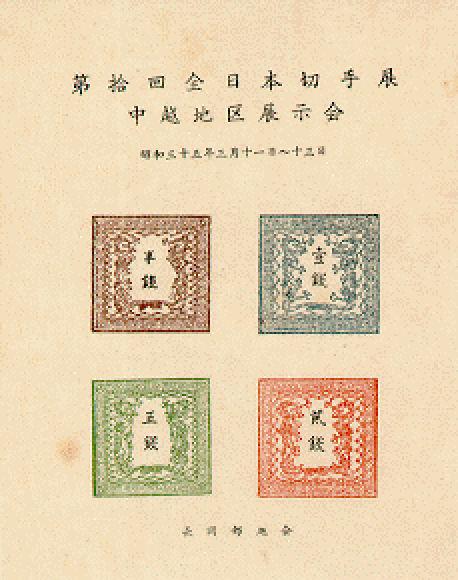 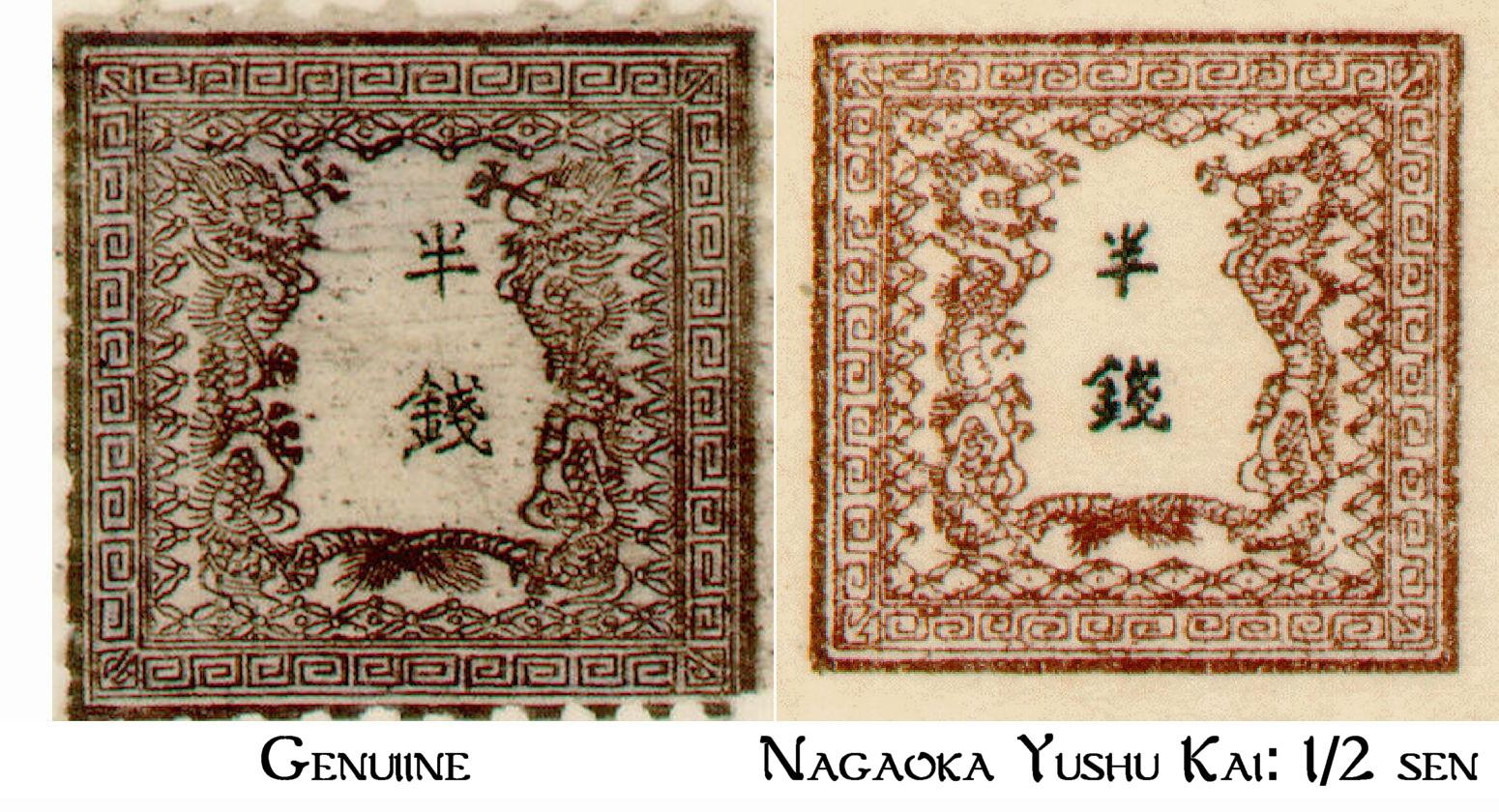 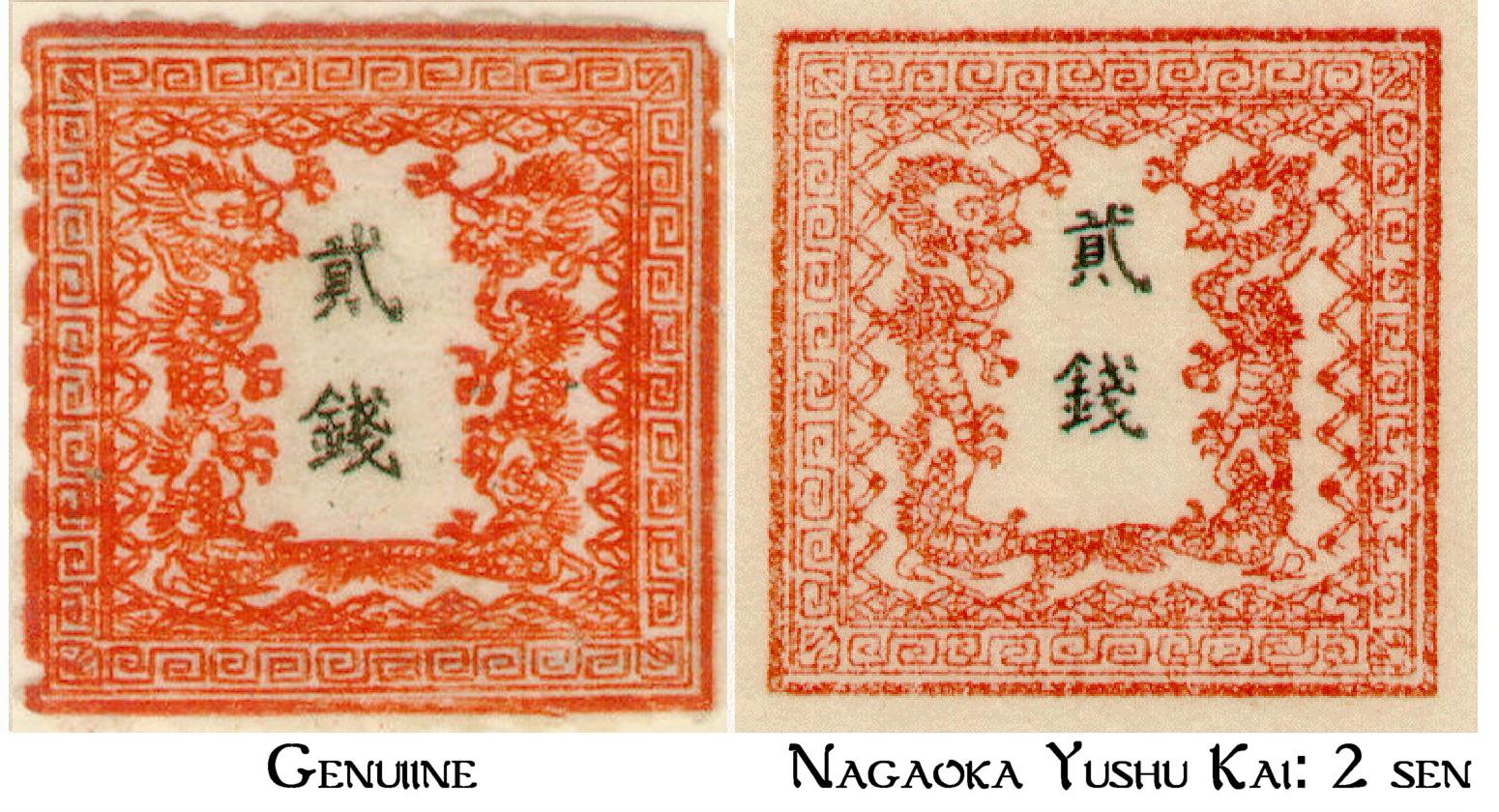 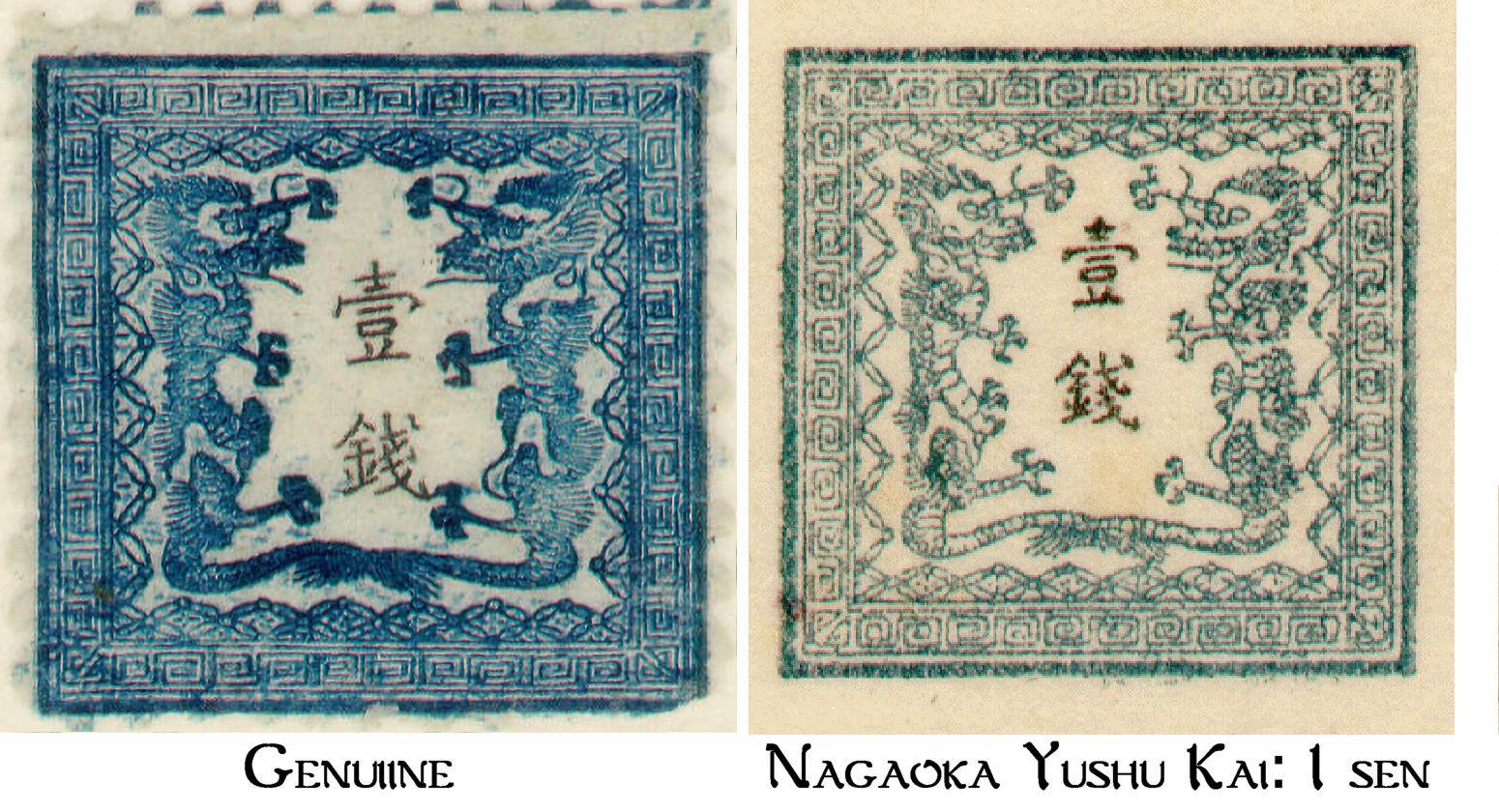 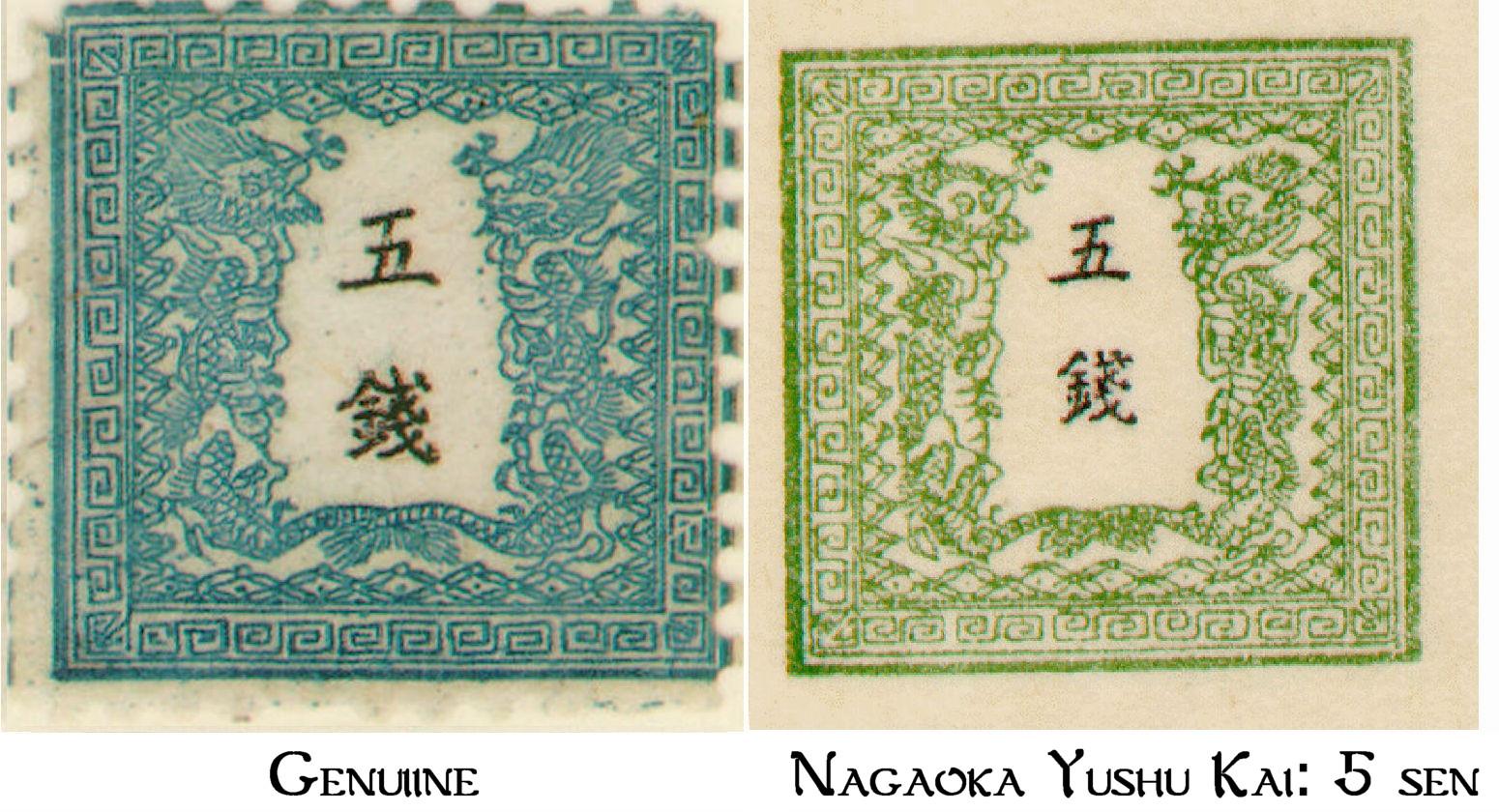 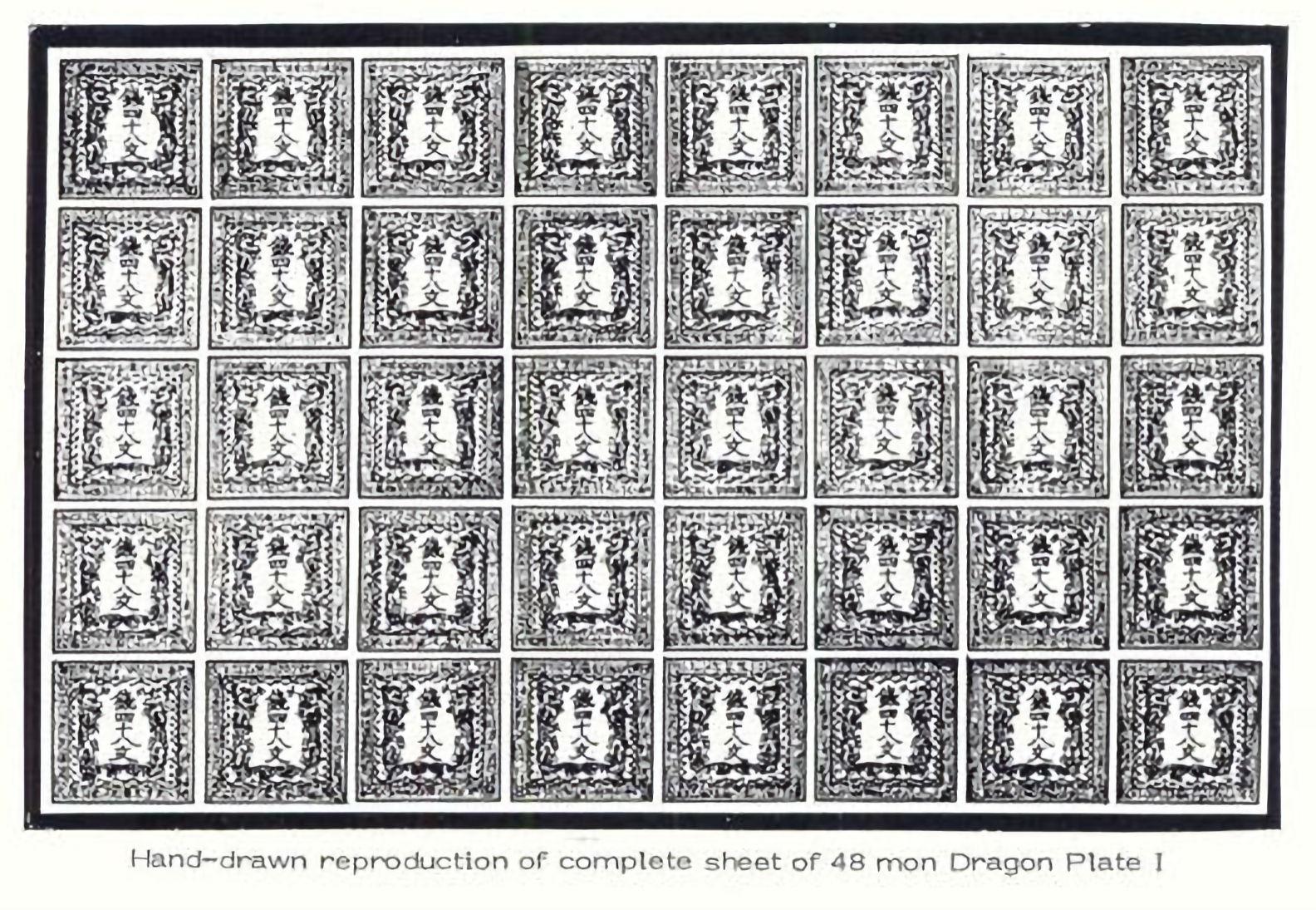 In February of 1971 the International Society for Japanese Philately published Monograph 4 by W. Metzelaar & Varro E. Tyler.  The cover of that publication shows the full hand-drawn sheet drawn by Setoguchi Tadashi in 1962.  The graphic on the left shows that sheet as published on the front cover of the ISJP monograph.  For more information about this monograph see https://isjp.org/monographs/.

Setogushi Tadashi was said to have done this sheet of 40 (same size as the genuine) of the 48 mon, plate 1 with great accuracy and without the use of a magnifying glass. The sheet required 400 hours to complete. 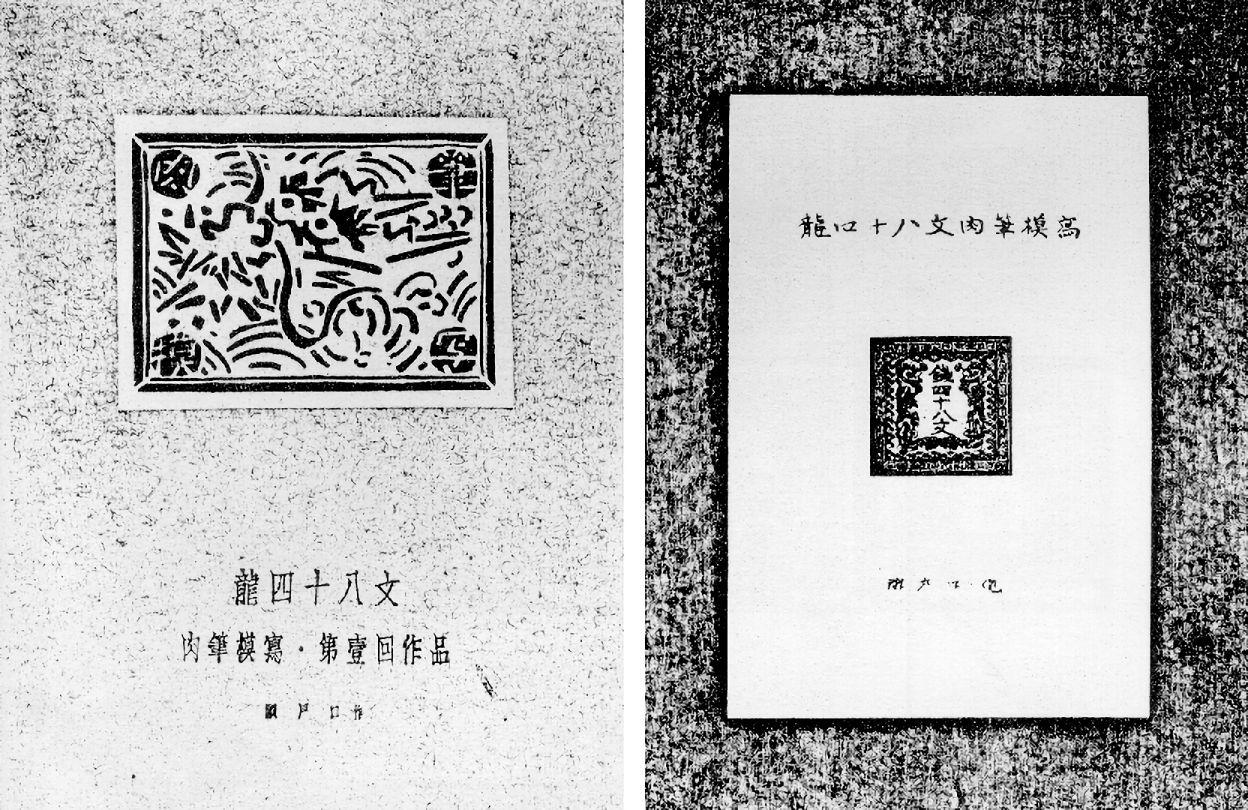 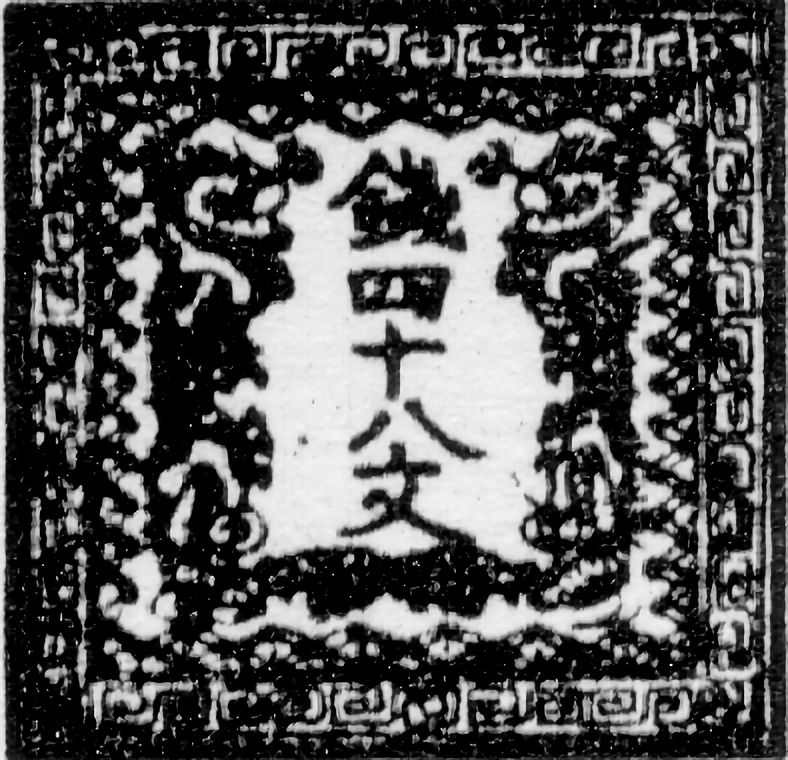 In 1969, a set of four mon Dragons were offered for sale at a stamp auction in Germany. The German catalog called them “essays.” These were forgeries produced photographically from original Dragon stamps and then printed by an offset process. The 48 mon, 200 mon and 500 mon are all the same design and are taken from the genuine 48 mon, plate II, position 9. The 100 mon was taken from plate II, position 28.  All of the graphics are taken from scans of photocopies and therefore useless for comparisons with the genuine. 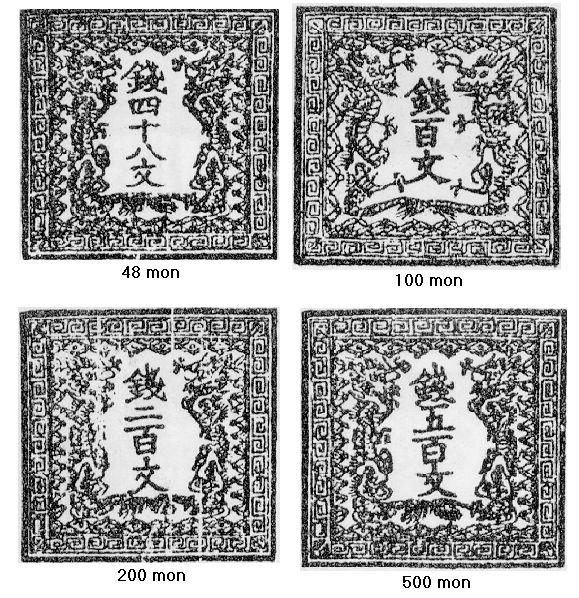 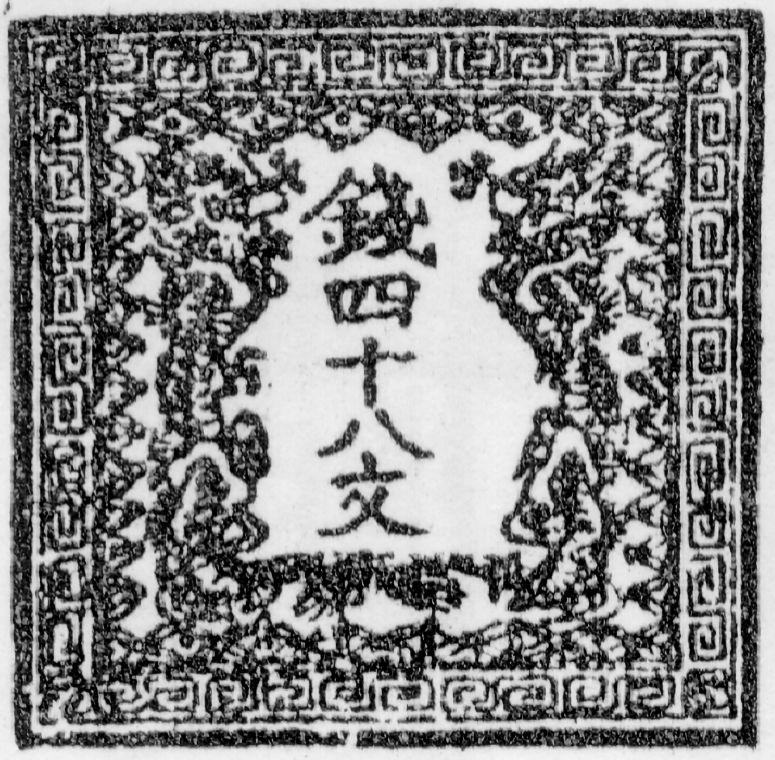 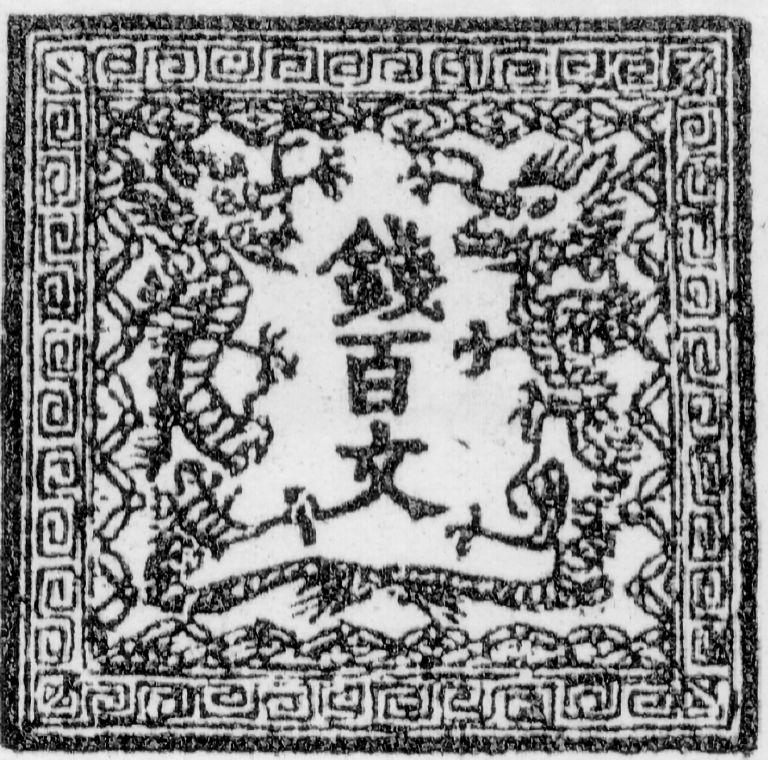 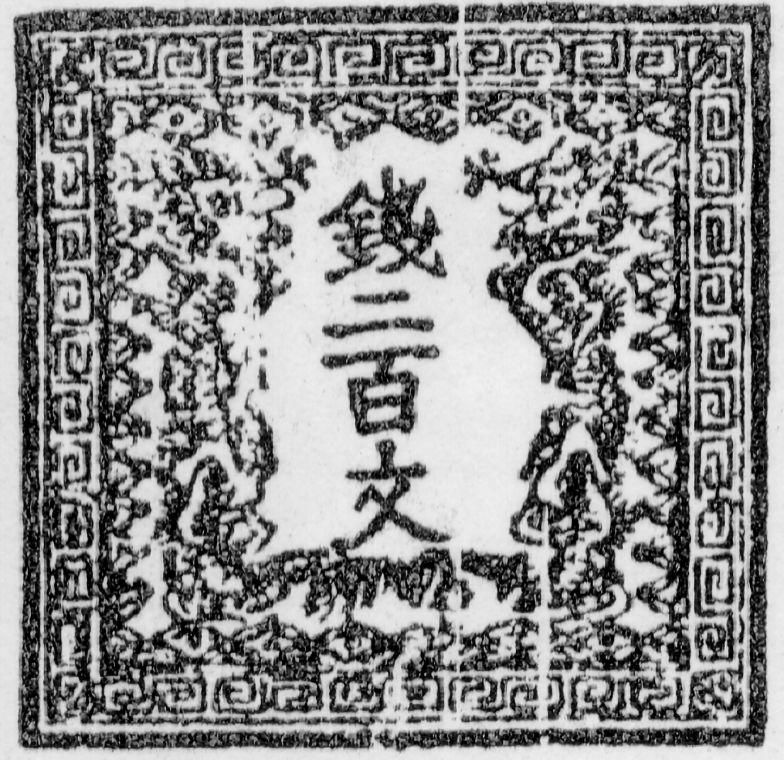 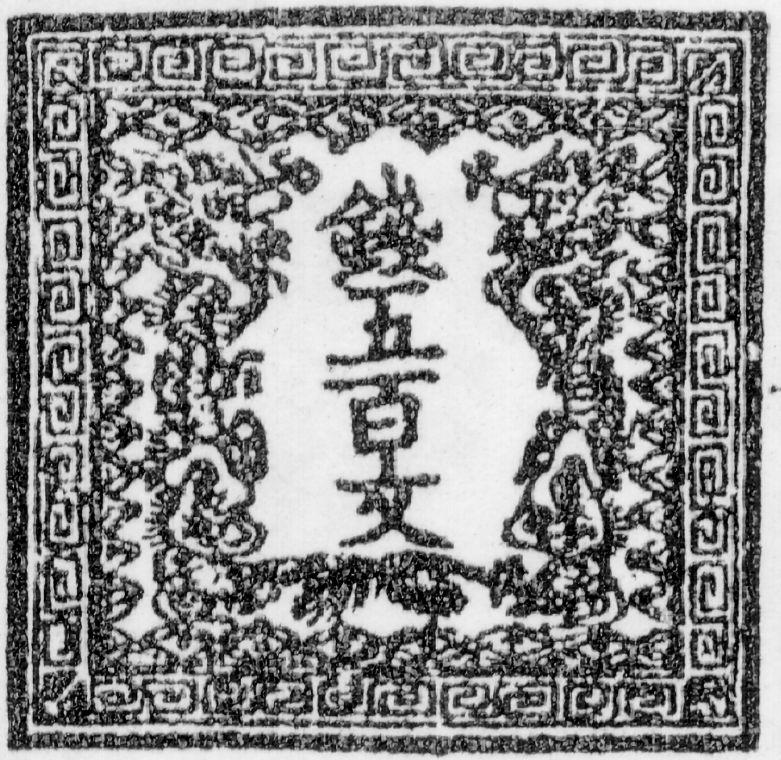 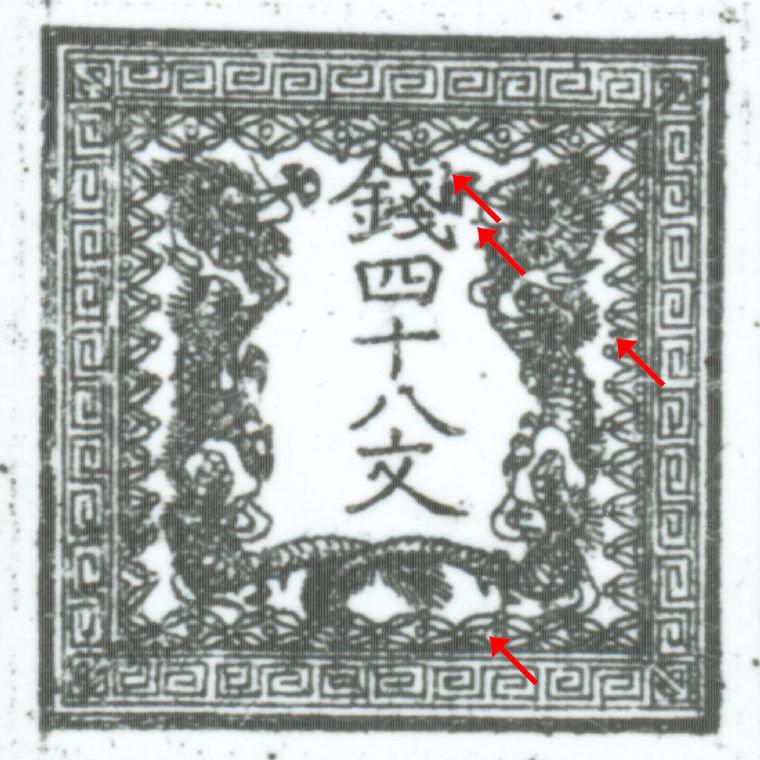 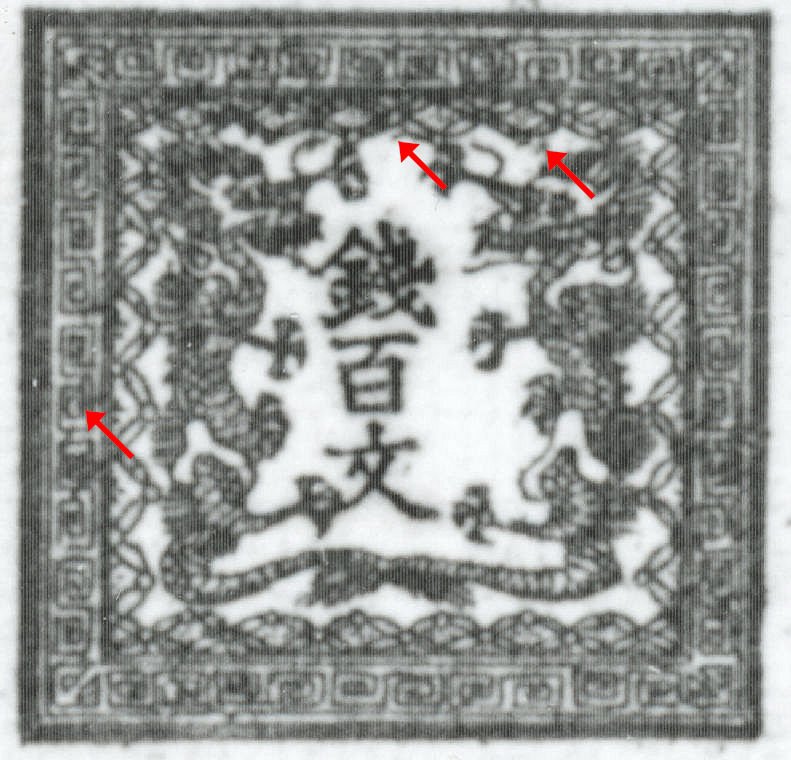