Early in 1971, the Government Printing Bureau printed copies of an engraved souvenir sheet measuring 120 x 80 mm, reproducing the four mon Dragon designs in original colors. An inscription meaning “Commemorating the 100th anniversary of the inauguration of the postal service, 1871-1971” is in the top margin. In the bottom margin are the imprints of the Postal Services Ministry and the Finance Ministry Printing Bureau. The sheet is imperforate and without gum on wove paper. This sheet is the top sheet below. Seemingly for political reasons, the sheet was never sold to the public and was not valid for postage. Many of the 60,000 sheets printed were destroyed, but apparently some were kept for presentation purposes. 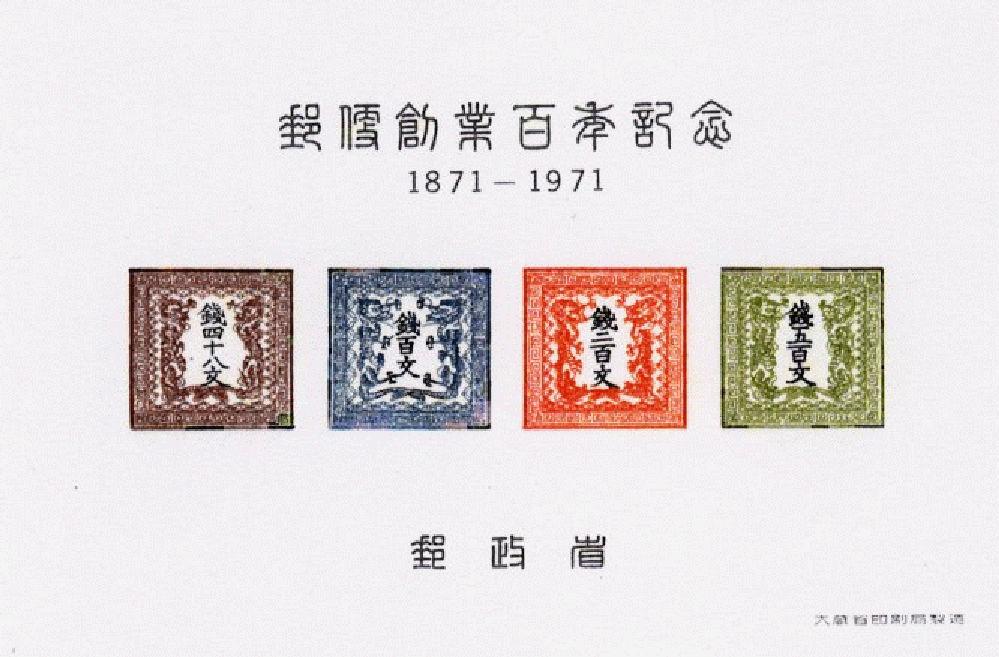 Some of the sheets not destroyed were distributed in the following ways:

The second is a a page from a presentation booklet printed by offset- lithography. The booklet measures 182 x 128 mm and has four pages.

This booklet is described as having been given to “all postal workers” or “to people connected with the postal service.”

The two punched holes in the west side margin where the page was bound into the booklet do not show in this image. But they would be clearly visible on any sheet removed from the booklet.

No enlargements of the stamps are available.

See “Dragon Centenary Sheet,” Japanese Philately, Vol. 30, pp 170-175 for more information about both of these items. 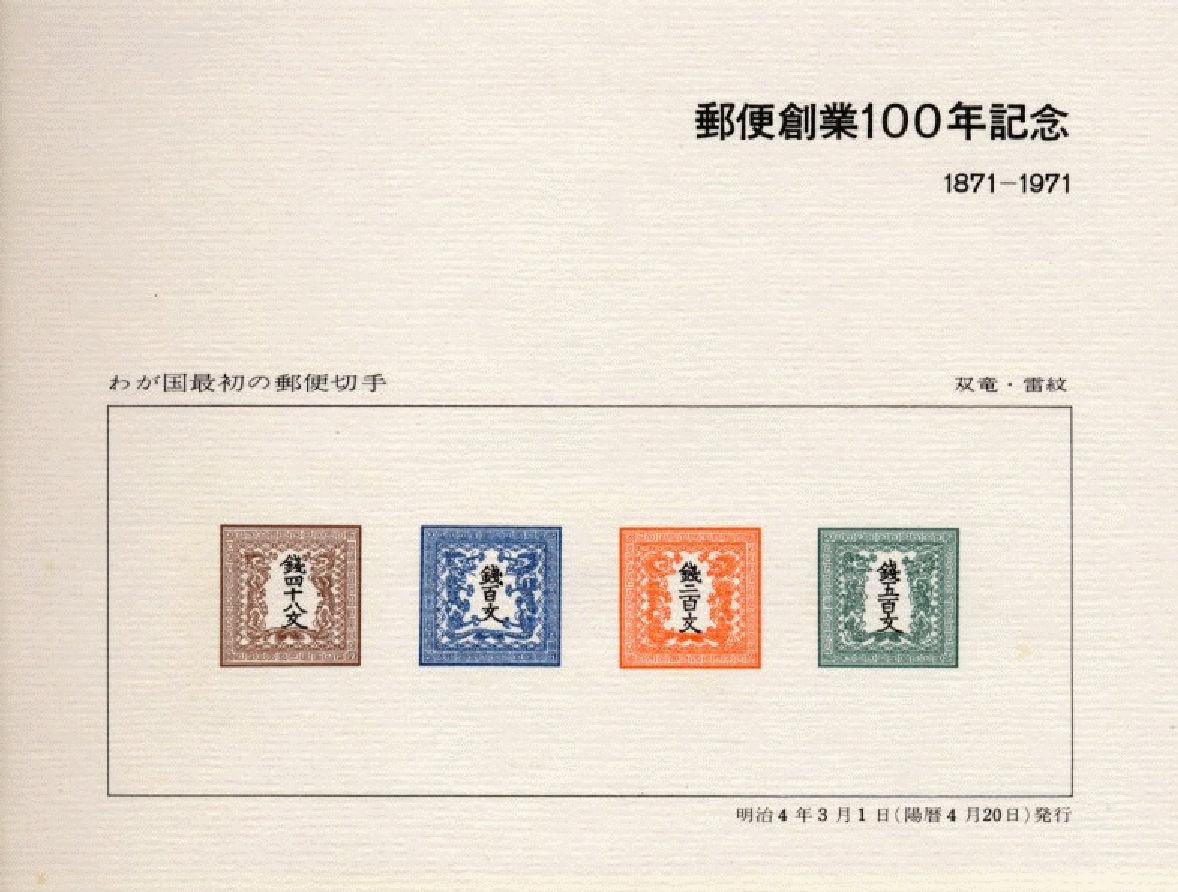 In January of 1971, the 100th anniversary of the Dragon stamps of 20 April 1871, the quasi-official Japan Stamp Publicity Association put on sale a souvenir sheet. The sheet had the JSPA imprint and that of the Printing Bureau, inscribed “CENTENARY OF JAPANESE POSTAGE STAMPS 1871-1971.” The sheet measured 144 x 94 mm and contained reproductions of the 48 mon Dragon, the British 1d penny black of 1840, and the British Guiana 1¢ magenta of 1856.

It was not a postal issue and was not valid for postage.  It is printed by photogravure in 5 colors, on unwatermaked white wove paper and ungummed.  The colors of the stamps shown are approximately the colors of the original stamps.

The sheet has a folder. The front cover, in black and orange, is printed by offset-lithography.  It has gray inscriptions on the back cover and inside the front cover.  The cover design shows a mirror-image (as they would appear on a printing plate) of part of the 48 mon Dragon design and a design that resembles the 1971 15 yen chrysanthemum regular stamp. 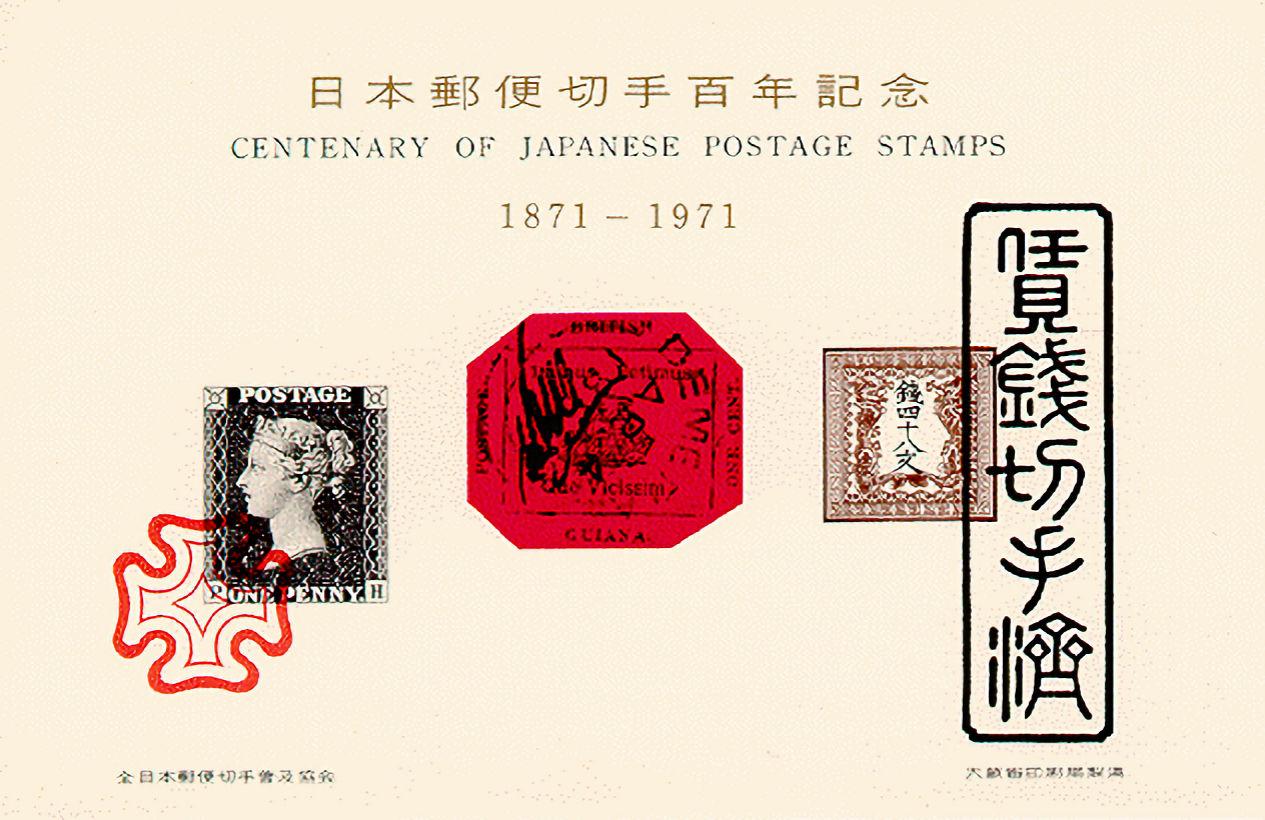 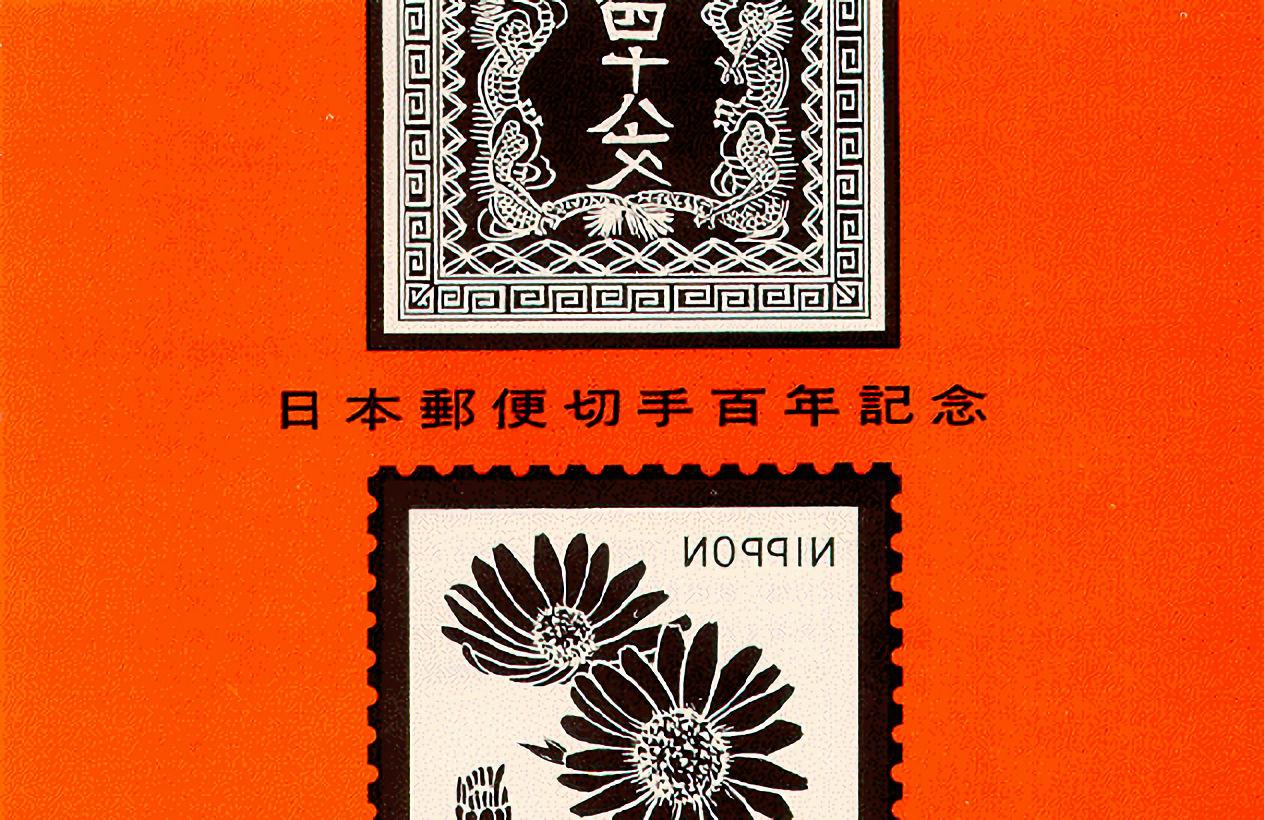 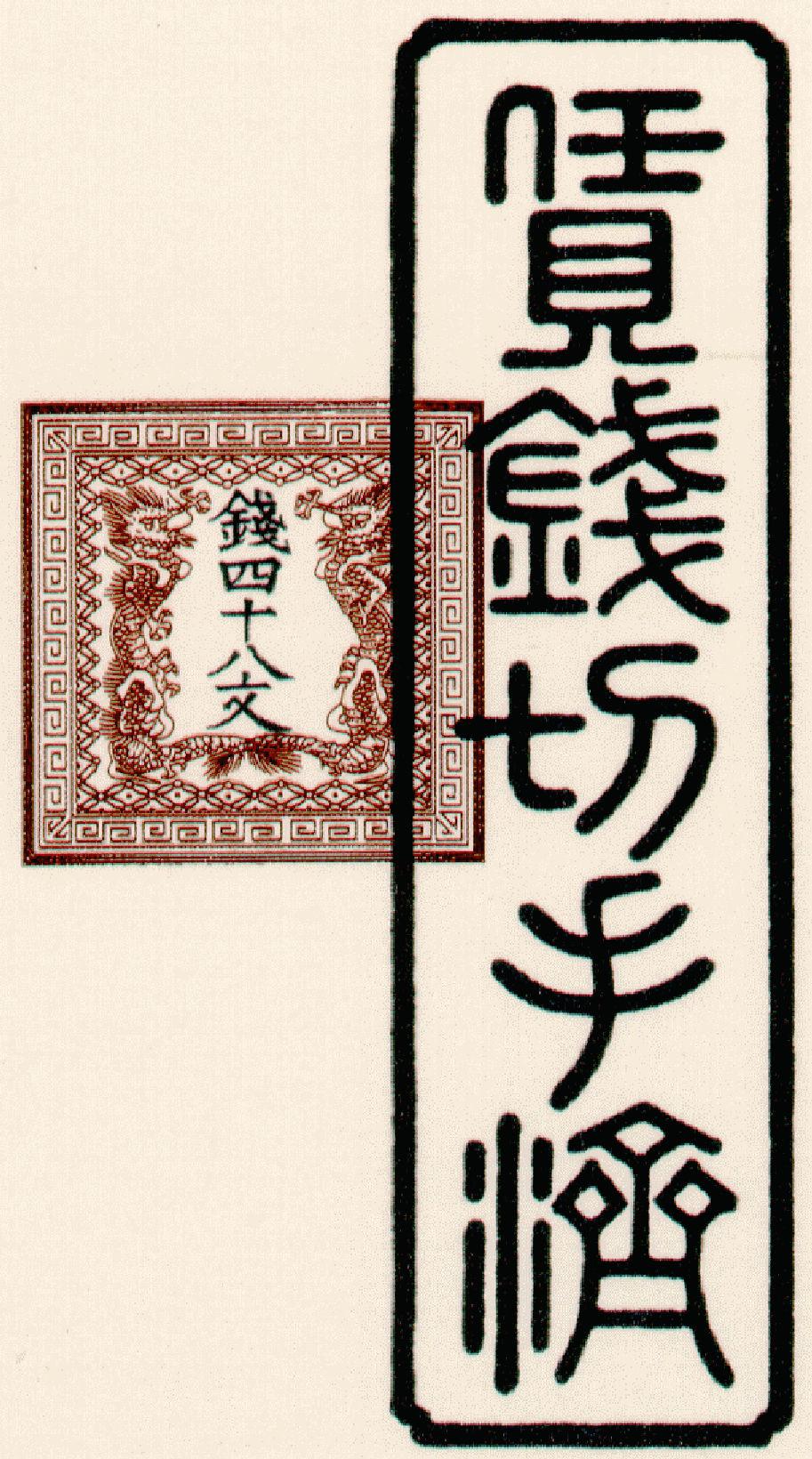 The 48 mon Dragon stamp is ‘canceled’ by a large framed ‘chinsen kitte zumi’ marking. (This marking was used only as a prepaid marking and was never supposed to be used as an obliterator on stamps.) 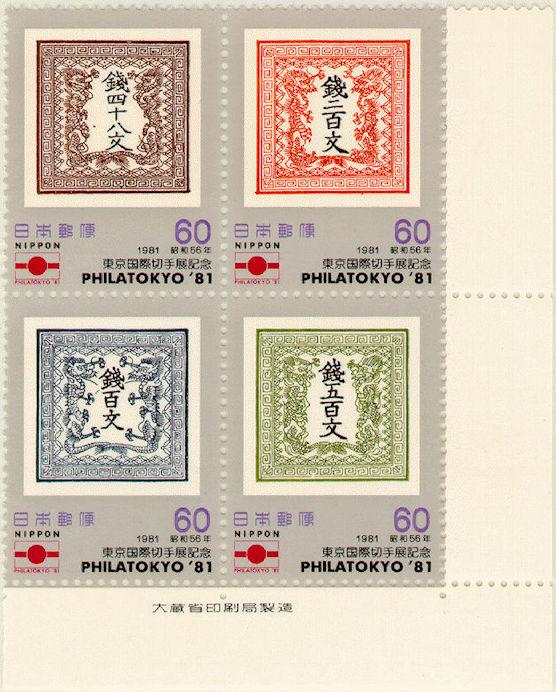 As Mike Ruggiero points out in Japanese Philately, v37, pp34-35. We do not know the name of the engraver of the intaglio stamps of the PHILATOKYO ’81 stamps, but he did a remarkable job of copying faithfully the characteristics of the original Dragon stamps.  What the 1981 stamps reproduce is not just any Dragon stamp but specifically position 1 of plate 1 of each denomination – including the unintentional “slips”, “dots” and other inaccuracies that enable us to plate the original stamps by position.  The only flaw he did not reproduce on the 48 mon is the long diagonal “slip” on the west side of the 48 mon, plate 1.  This “slip” does appear on the photograph displayed here, but it does not appear on other sheets.  Thus, it can be assumed that either this slip developed after the earliest printing or was not constant.

Unlike the stamps above, this souvenir sheet reprinting the first four dragon stamps was issued by the organizing committee of Philatokyo in October of 1981. It doesn’t have the same status as the stamps issued above.  The sheet is 210 x 110 mm and has the imprint on the bottom under the red band reading in Japanese “Produced by the Finance Ministry Printing Bureau.”  It was not valid for postage. Note the two black lines through the postal inscription and the 60 yen denomination.

The sheet was distributed in an envelope also with the PHILATOKYO ’81 notation. Another sheet at a slightly smaller size 206 x 100 mm was also produced in black.

There are no inscriptions on the reverse of the sheet in the positions of the stamps revealing that these are 1981 reprints. The stamps are the same size as the originals and have the “secret marks” found on the genuine stamps.  But the paper is a thick glossy foreign paper instead of the thin native paper of the originals.  Otherwise these stamps would be very deceptive if cut from the sheet.

Souvenir Sheet as Issued in 1981