While the Government printed syllabics

on native paper, the stamps were never issued to the Japanese public.  Syllabics

exists only on wove paper.  All known stamps were utilized as specimens for official notifications and bear the black-dot (sumi-ten) specimen overprint.  Syllabics

exist only in unused condition.  It is believed that they were sold to foreign stamp dealers as export sheets for disposal by the government.

There is one original plate for each syllabic.  Printing was done by the Government on native paper for syllabics

were thought to have been engraved by Matsuda.  Syllabics

by Umemura.  A lighter shade of violet was used for the syllabic

There are no known classic forgeries of syllabics

, but there are ABC Kurabu (Club) forgeries of

which are not deceptive.  All the classic more deceptive forgeries are syllabic

There is no secret mark on the genuine stamps. 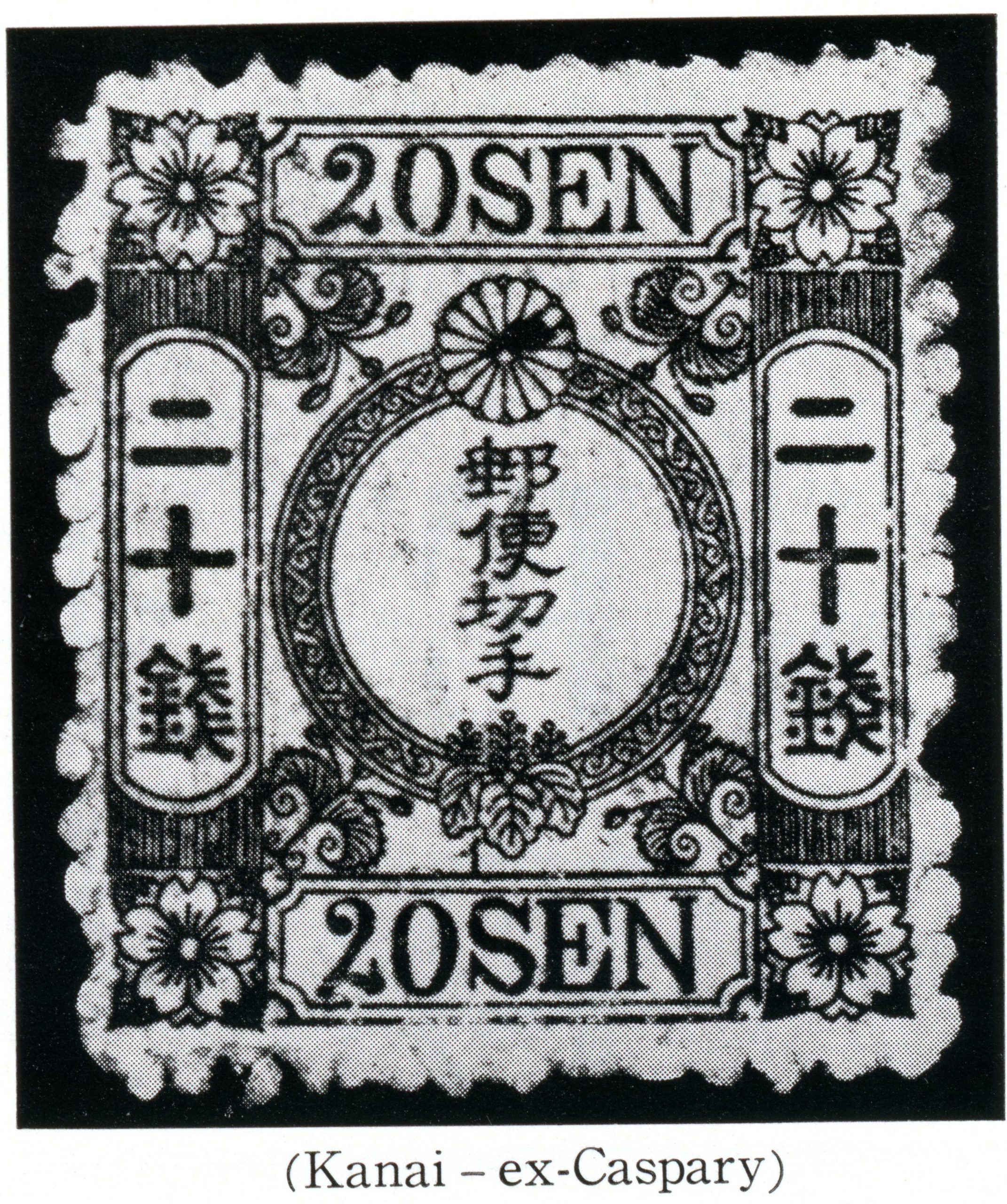 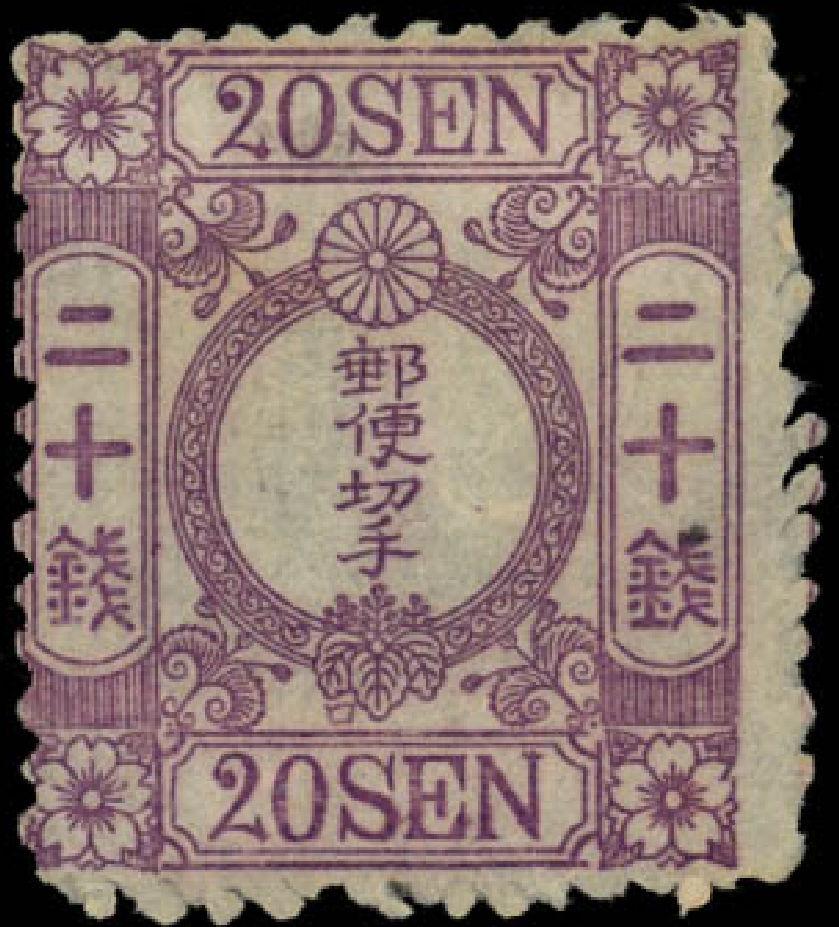 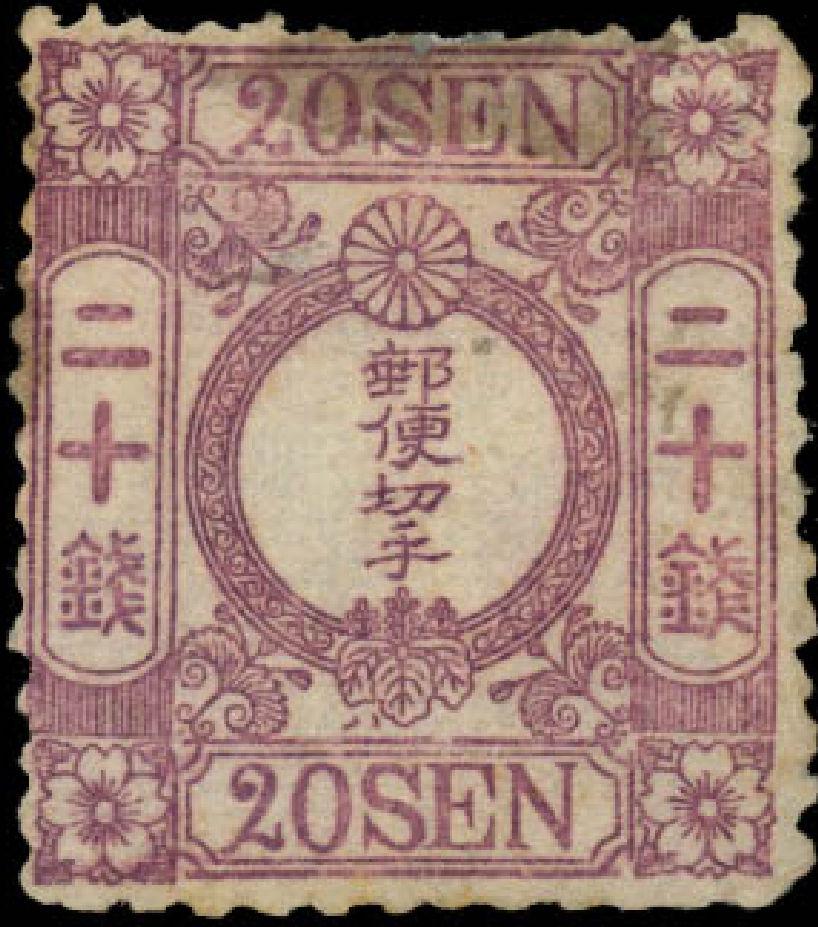 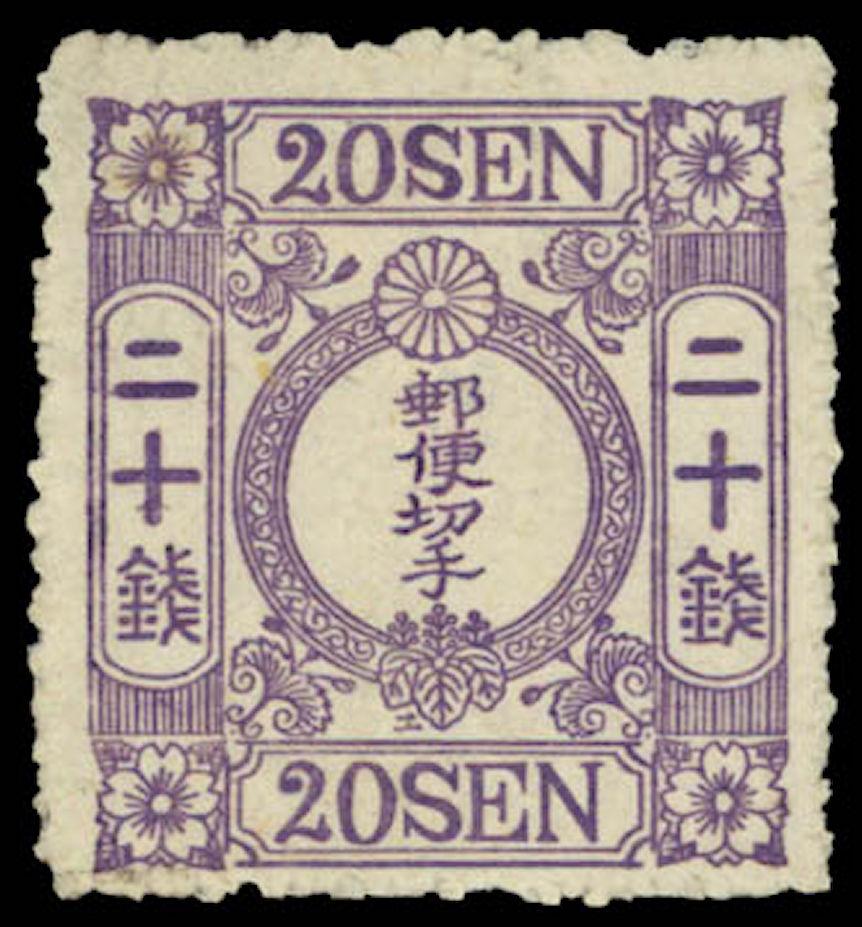 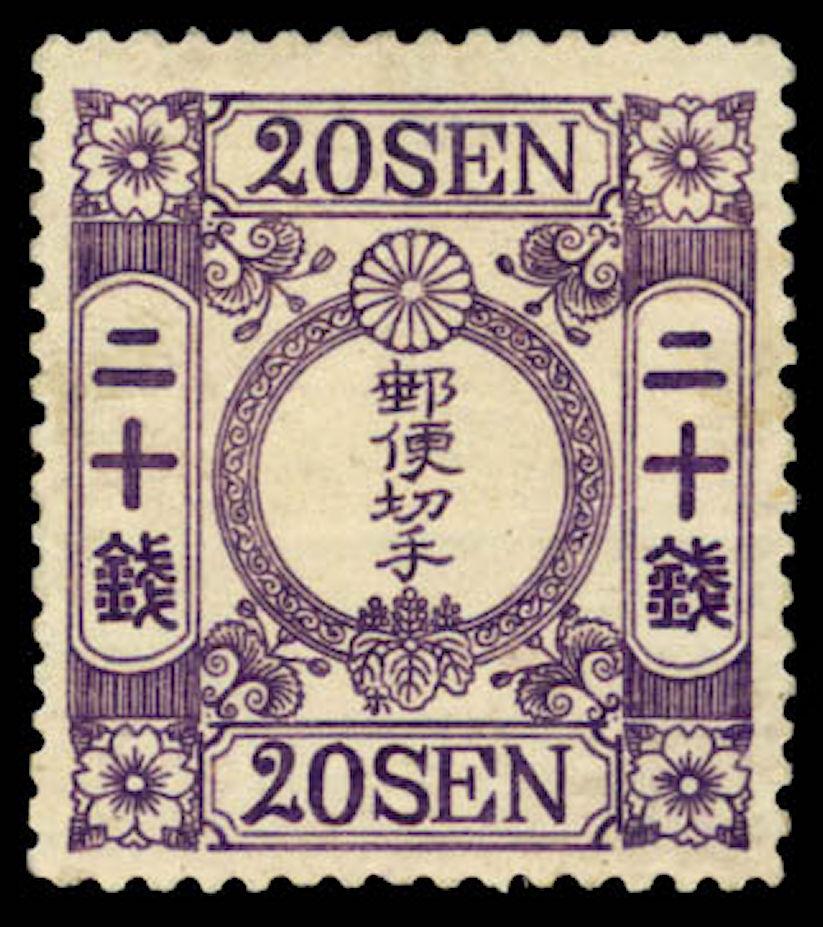 These characteristics are typical of most of the forgeries.

A:  Genuine:  At the lower end of the central band, the inner scroll ends with an upward curl before the paulownia leaf and does not touch the leaf.   Forgeries:  In forgeries, the end curl is usually downward and/or may touch the leaf.

C:  Genuine:   Each  inner frame ornament has a distinct central notch from which three flower protrude. The center flower stem  continues back to the base of the ornament.   Forgeries:   Some forgeries have no V-shaped depression and all the flower stems end at the edge of the ornament. 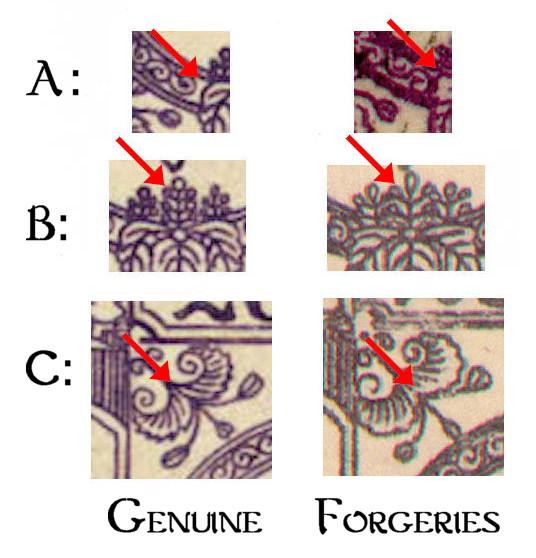 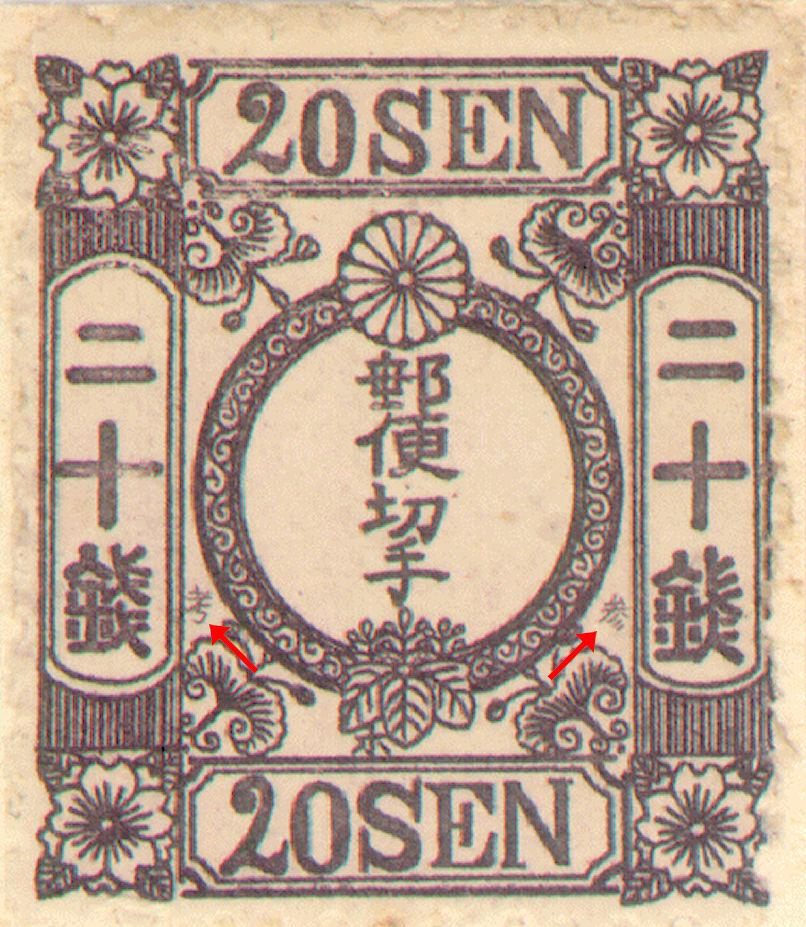 Sankō at bottom outside oval ring in color or stamp. 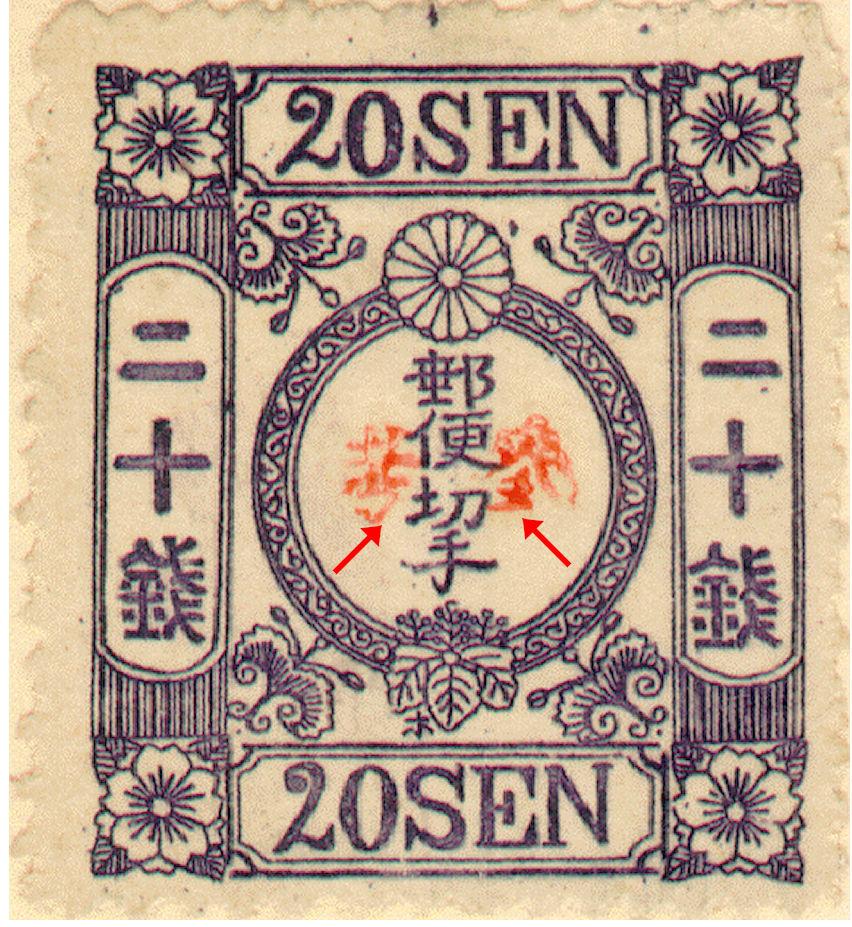 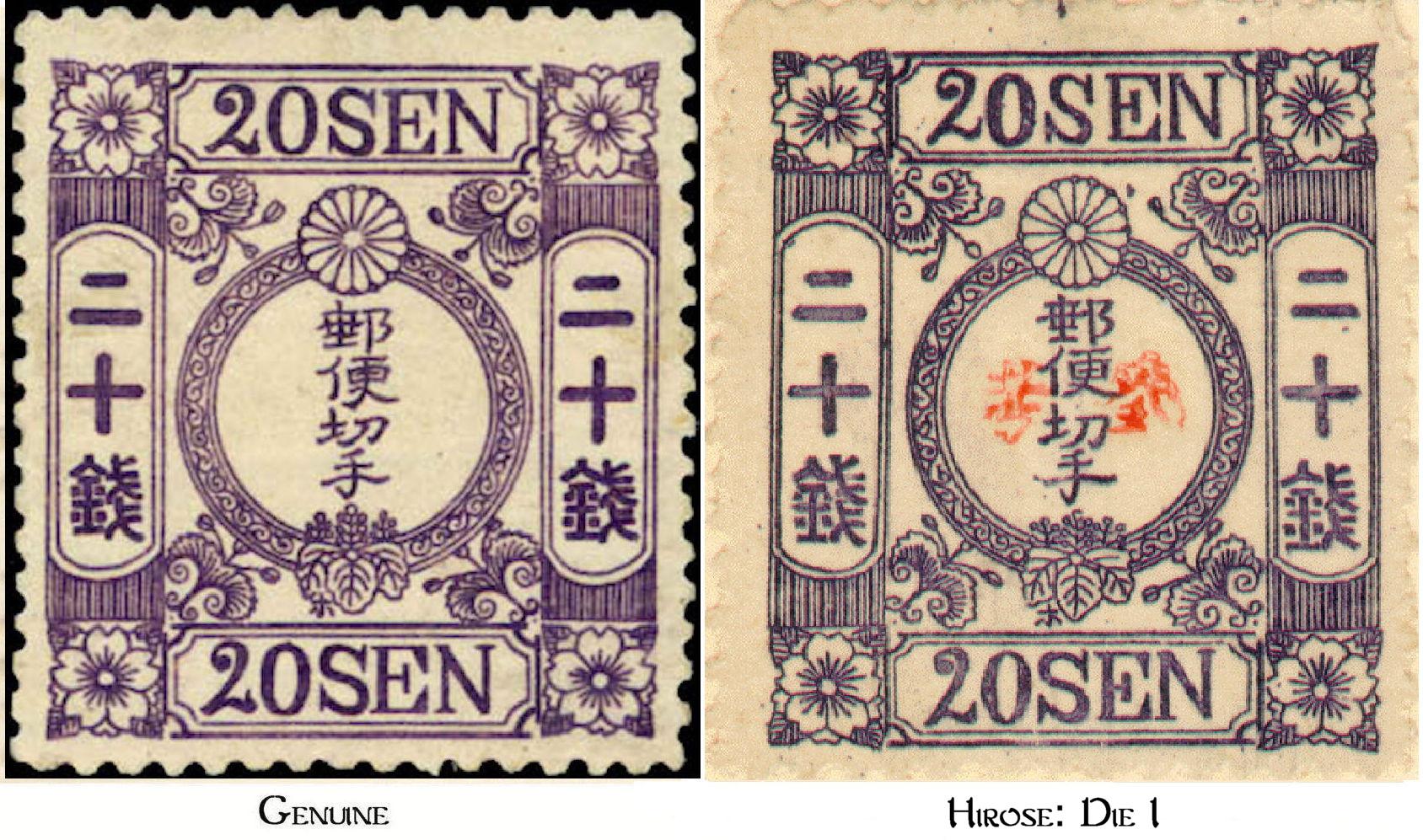 Although this example has the red sankō overprint, it is known with no sankō. 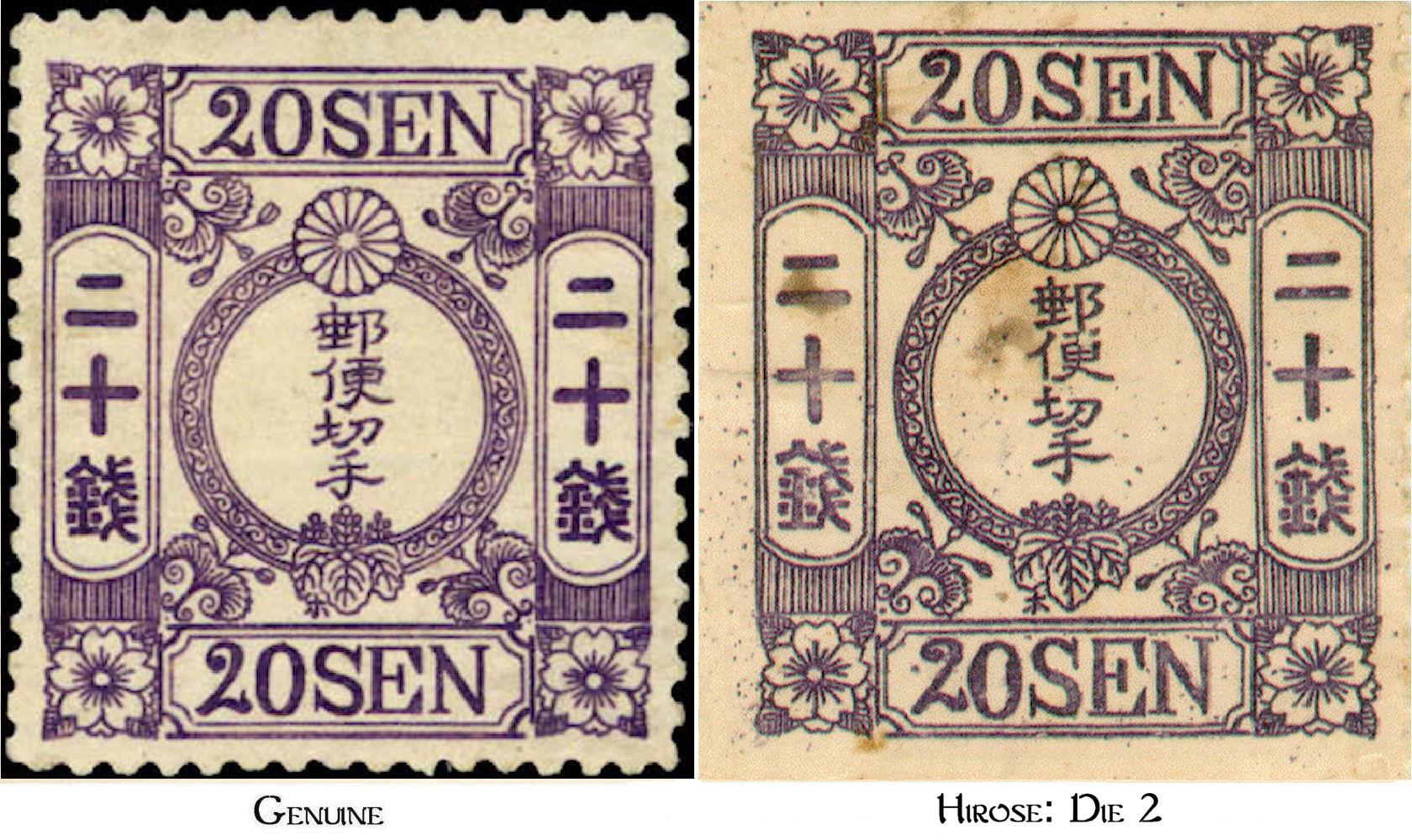 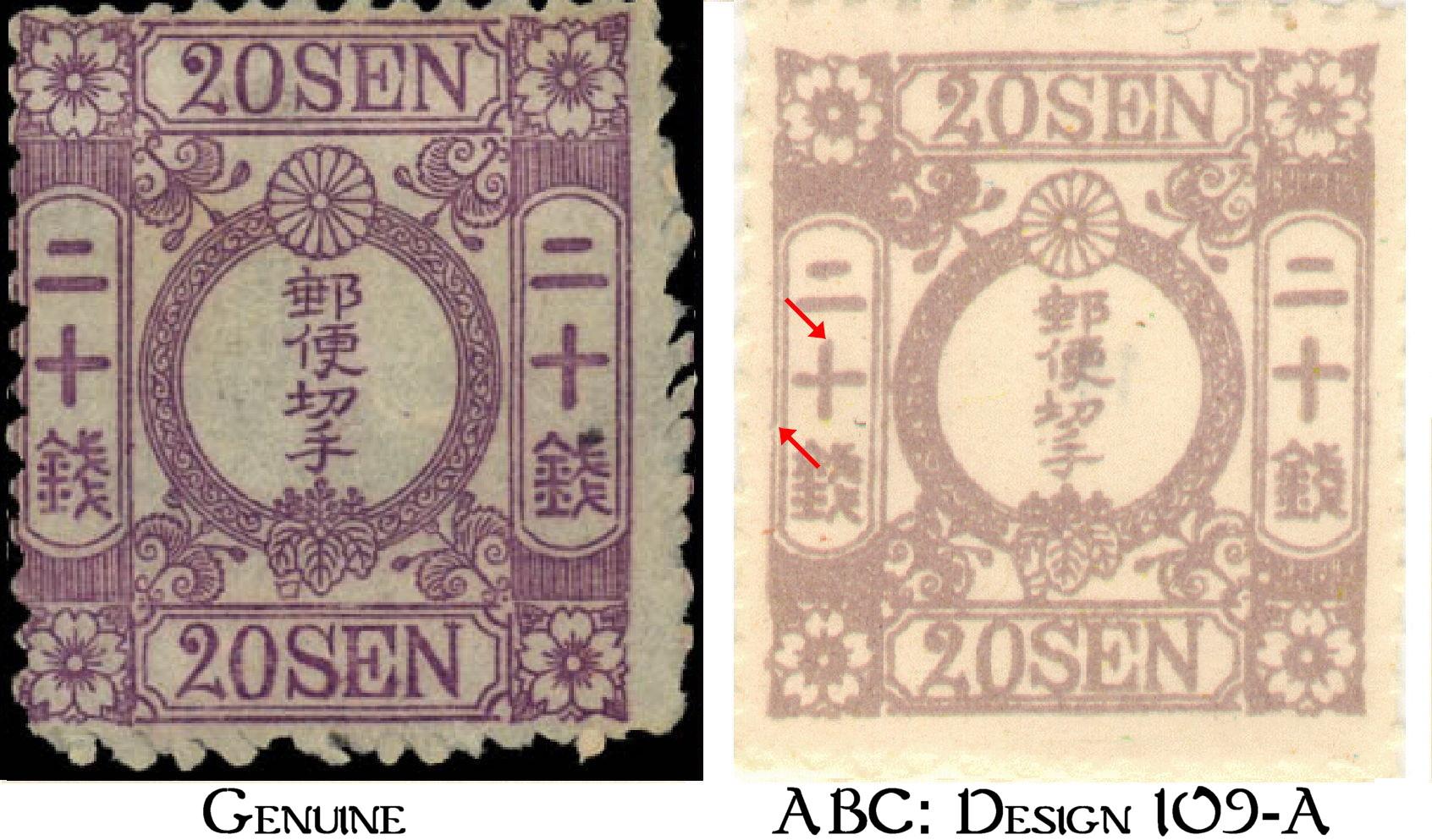 Only known forgery with syllabic

Characteristics of Design 109-A: 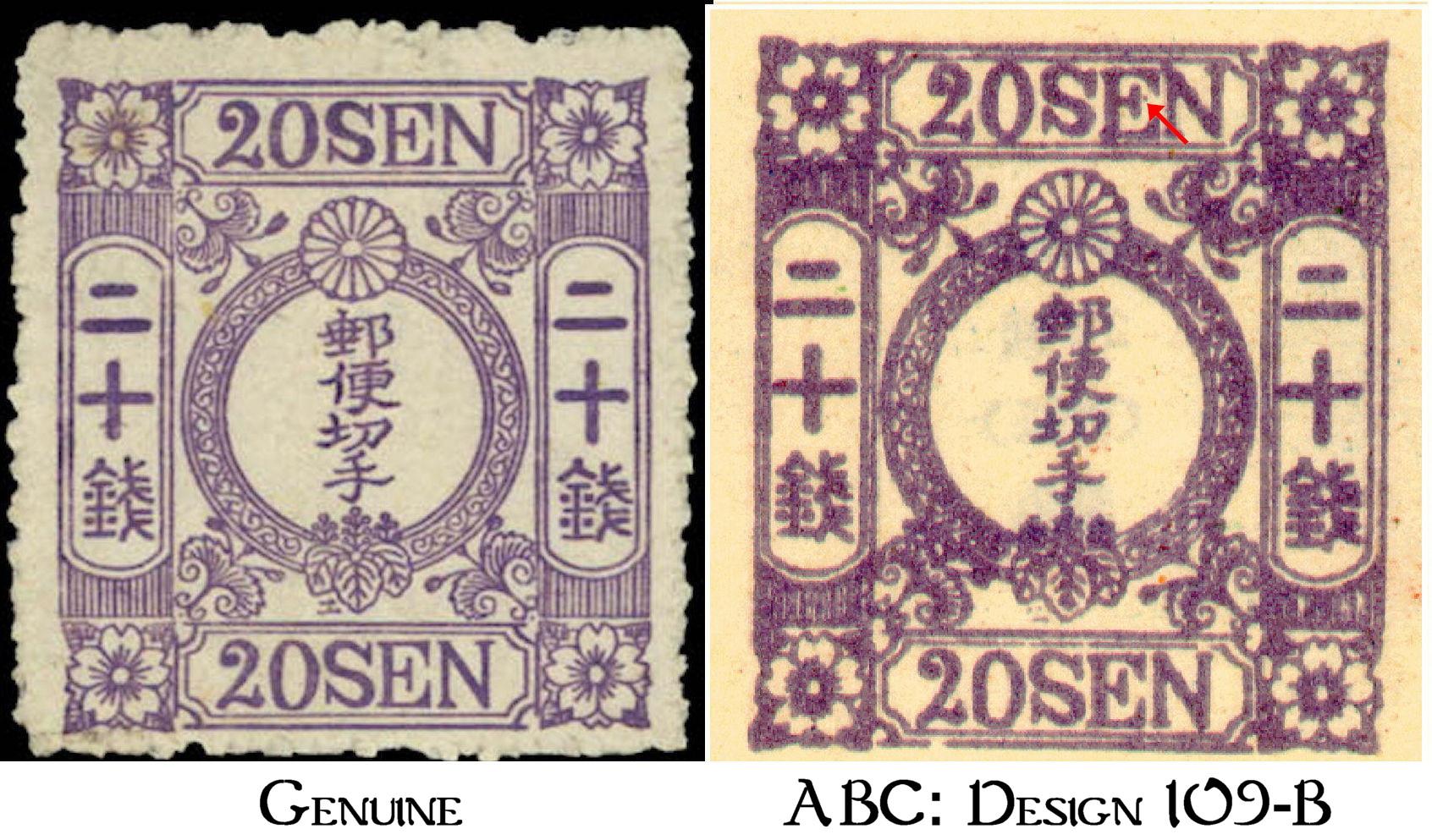 Only known forgery with syllabic

Characteristics of Design 109-B: 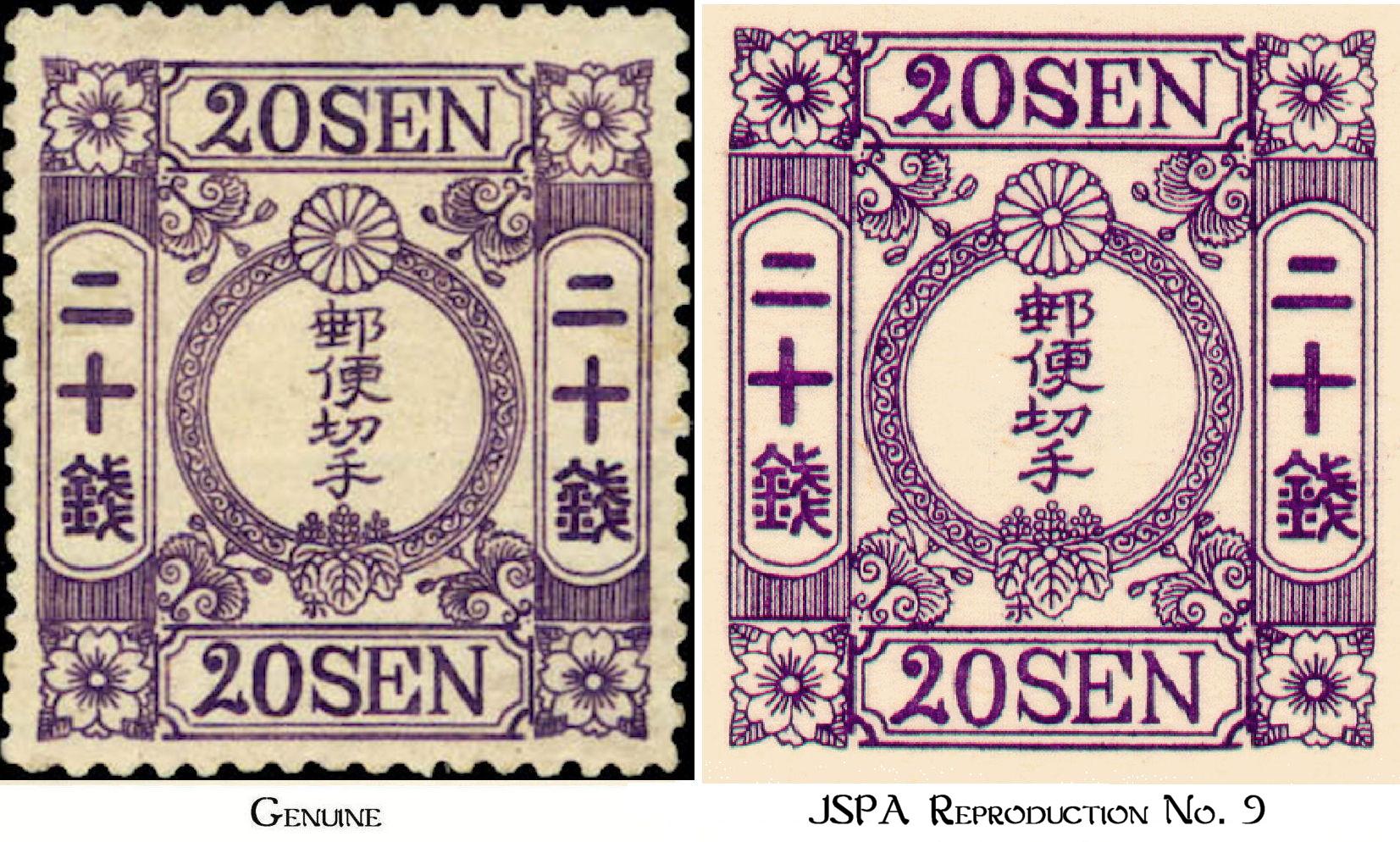 Genuine with JSPA Sheet No. 9 Issued 20 November 1962 with Syllabic

The stamp on this sheet reproduces the genuine issue of  February 1874 on wove paper.  The stamp is imperforate on cream-colored wove paper.   Click here to see more information about JSPA reproductions. 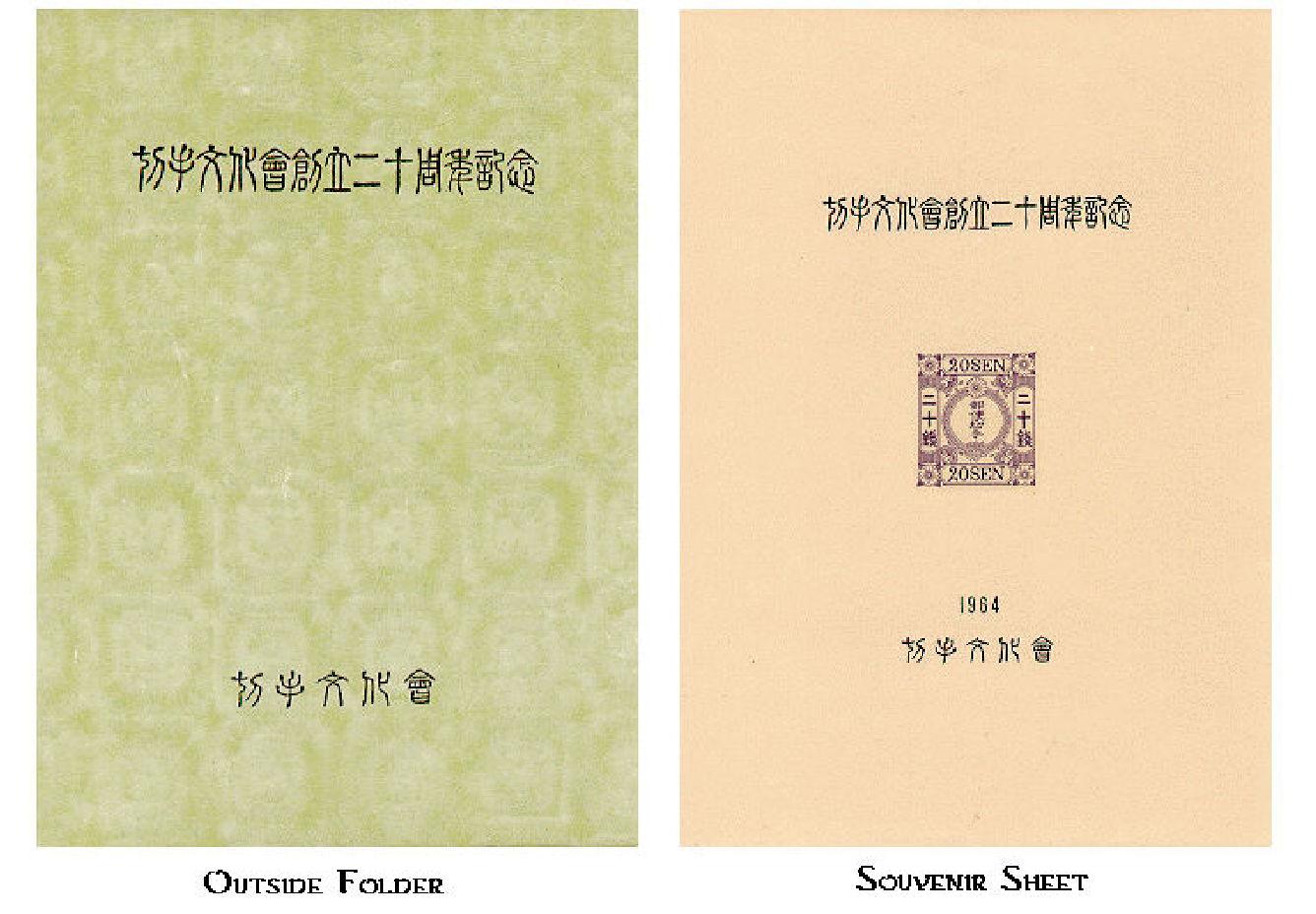 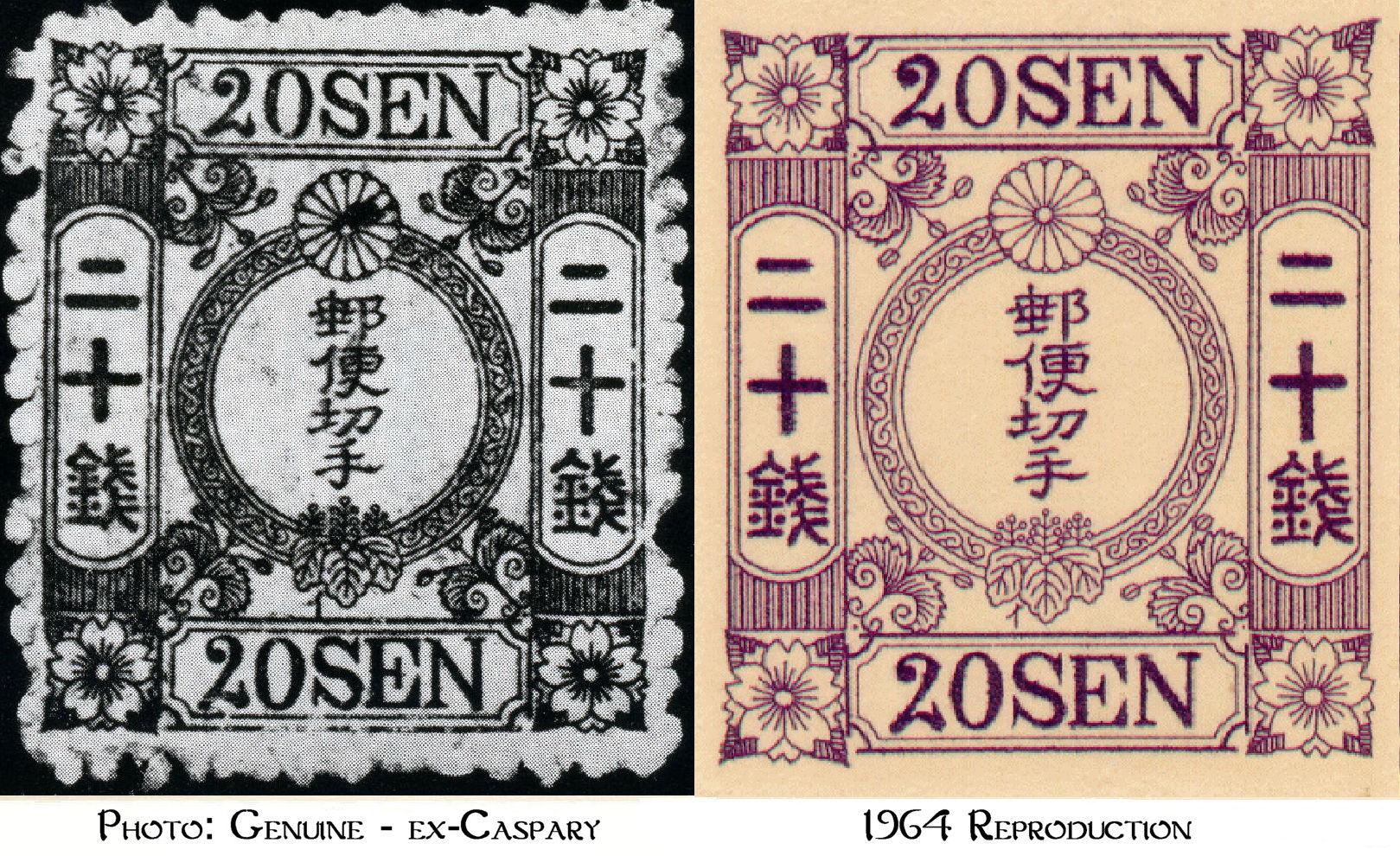 is one of the rarest stamps of Japan.  It was never issued to the Japanese public.  It is only known used with the back dot (sumi-ten) of a specimen stamp. The photograph shown here is taken from Dr. Ichida’s book, The Cherry Blossom Issues of Japan 1872-1876, page 182.  At the time of publication of Dr. Ichida’s book (1965), he says that about 6 copies probably exist.  The photo of the copy shown here was in the Kanai collection (x-Caspary).  Note the clear sumi-ten (black-dot) on the chrysanthemum crest.

As explained in Japanese Philately, Vol. 19, p104, this reproduction was made from a new die engraved by the retired Chief of the Engraving Section of the Government Printing Bureau, Katō Kurakichi.  The reproduction is exquisite in engraving detail and printing.  Only 1,000 copies were issued  to commemorate  the twentieth anniversary of the Kitte Bunka Kai of Tokyo.

The sheet is heavy high-quality wove paper, 121 x166 mm, and the stamp is in the violet color of the original.

The folder cover in light green has similar inscriptions and an explanation inside.