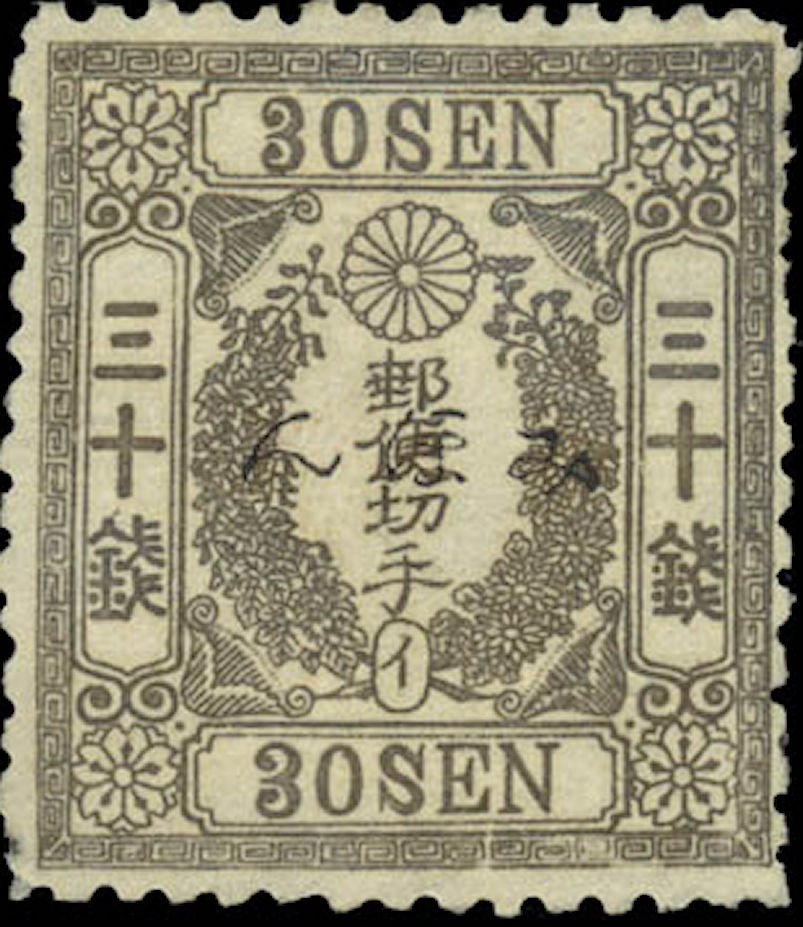 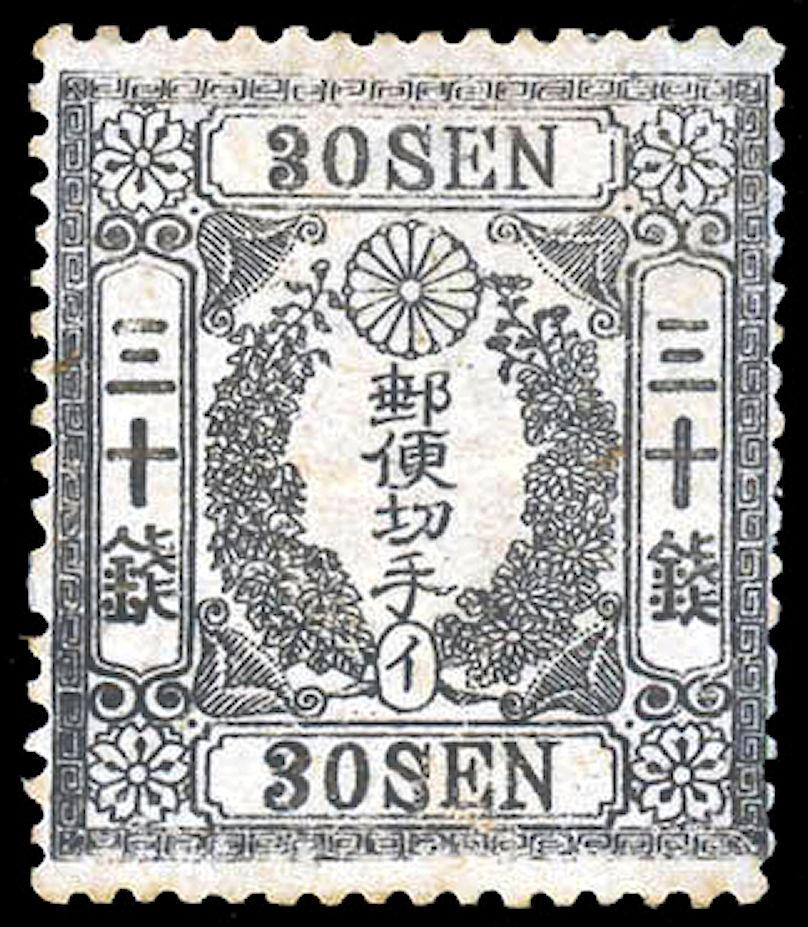 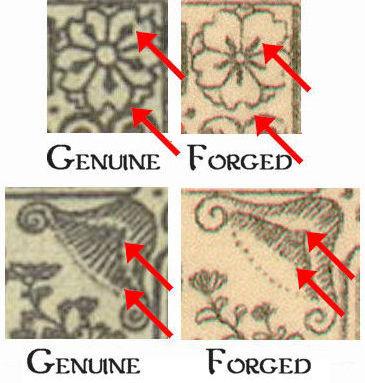 From top to bottom:

Also  Genuine:  Have 10 raimon at East and West and 8 raimon at North & South.  Forgeries:  Some other number of raimon in these positions. 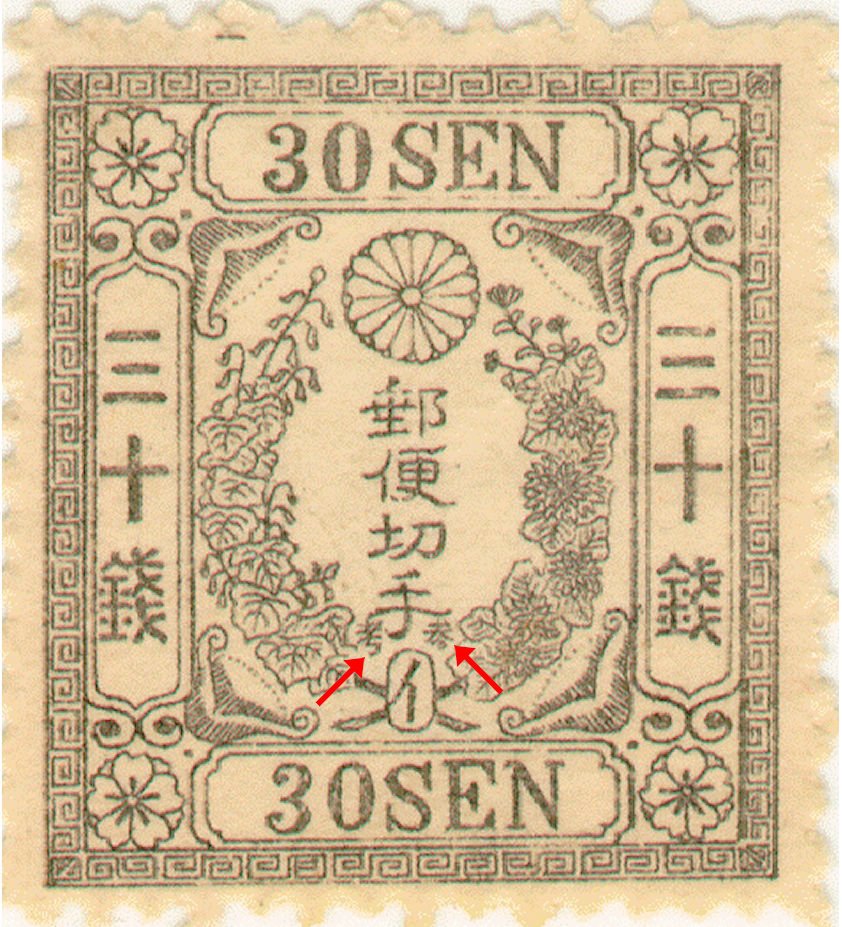 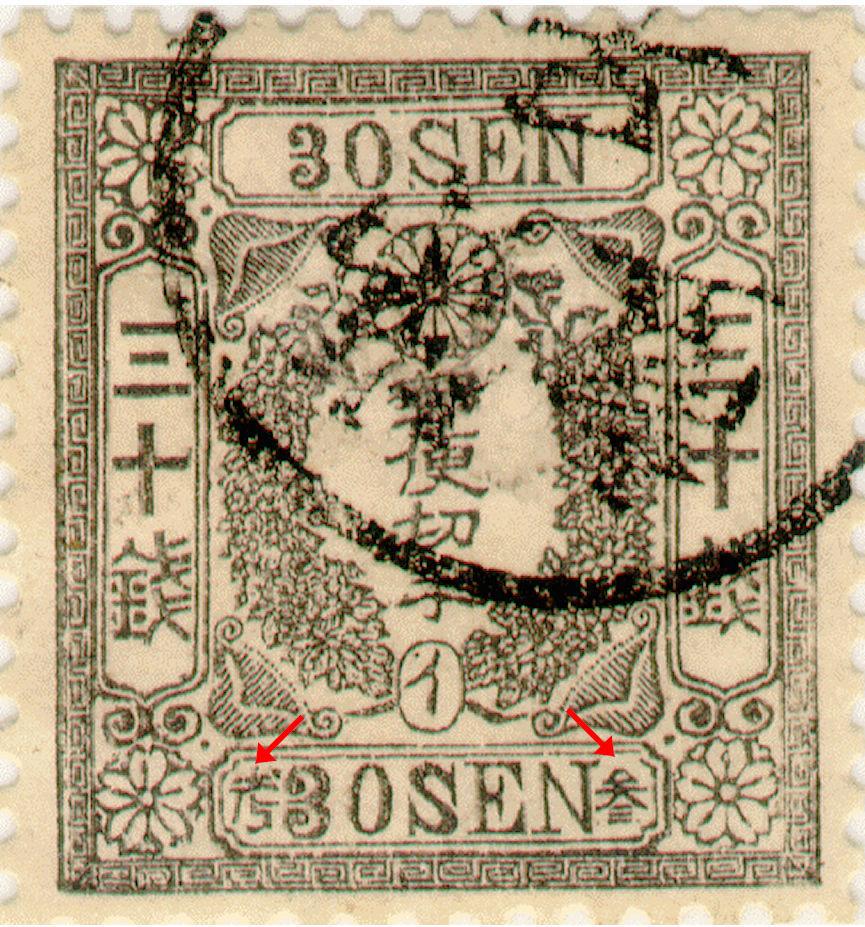 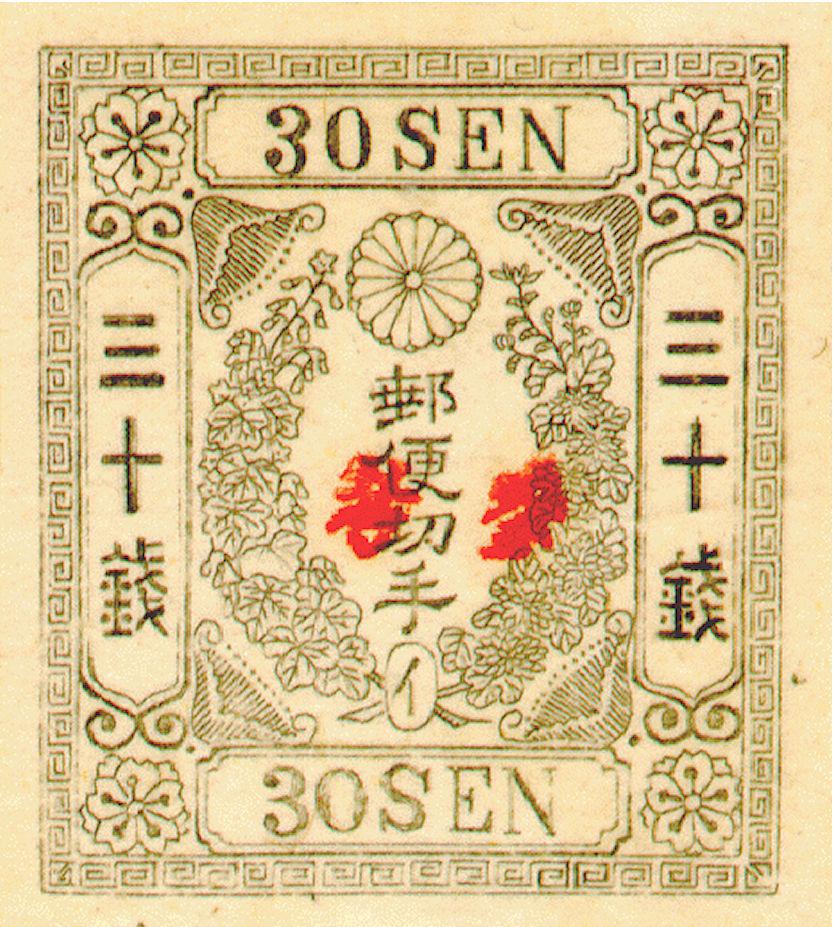 Hirose: (One Die Only)

Most of the “unsigned” forgeries below are deceptive.   The two exceptions are the Spiro, and ABC forgeries. The ABC design is accurate, but printing is very poor.  Some of the others reproduce the genuine design accurately. 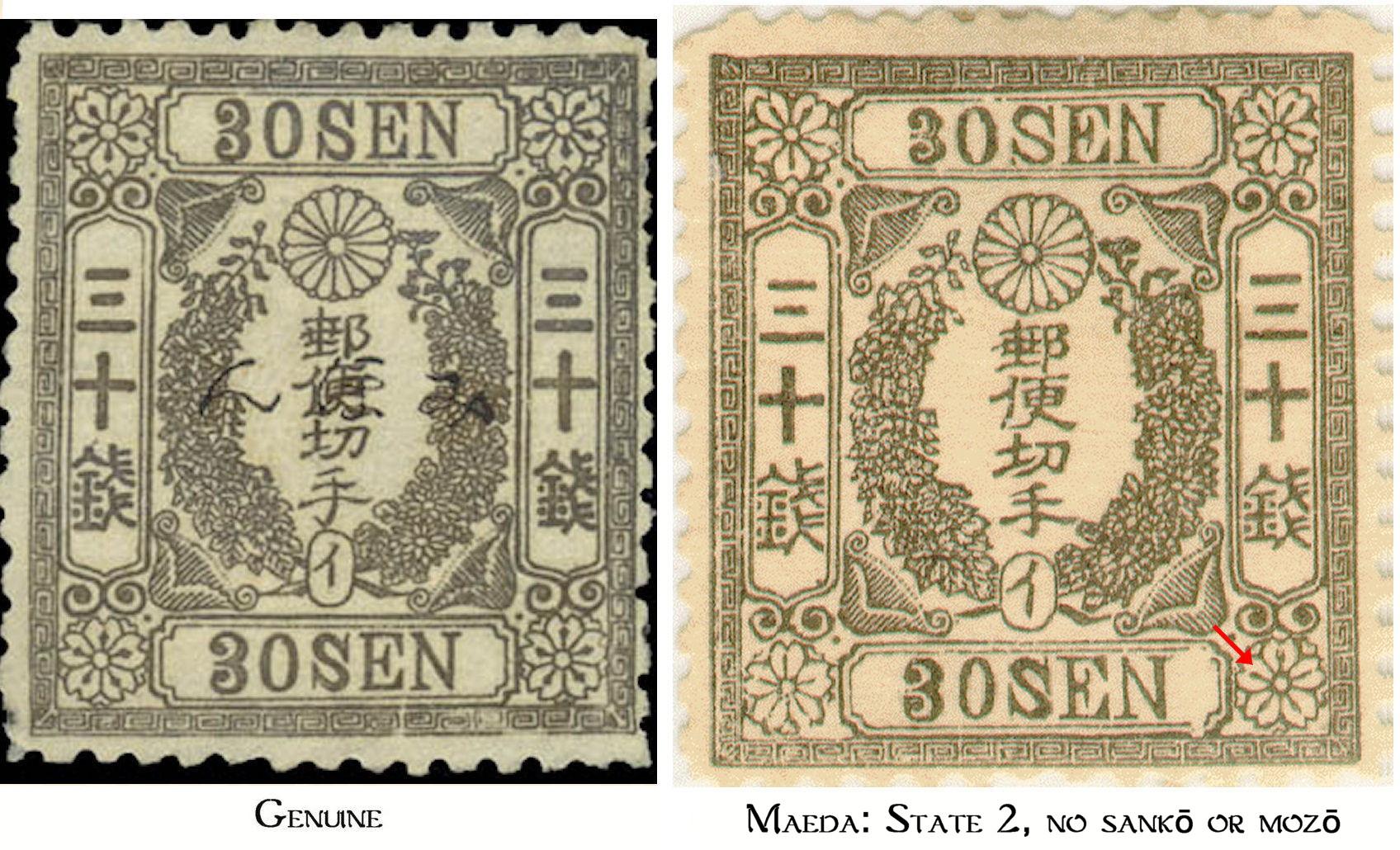 Many of the stamen in the corner cherry blossoms are straight lines instead of club-shaped. 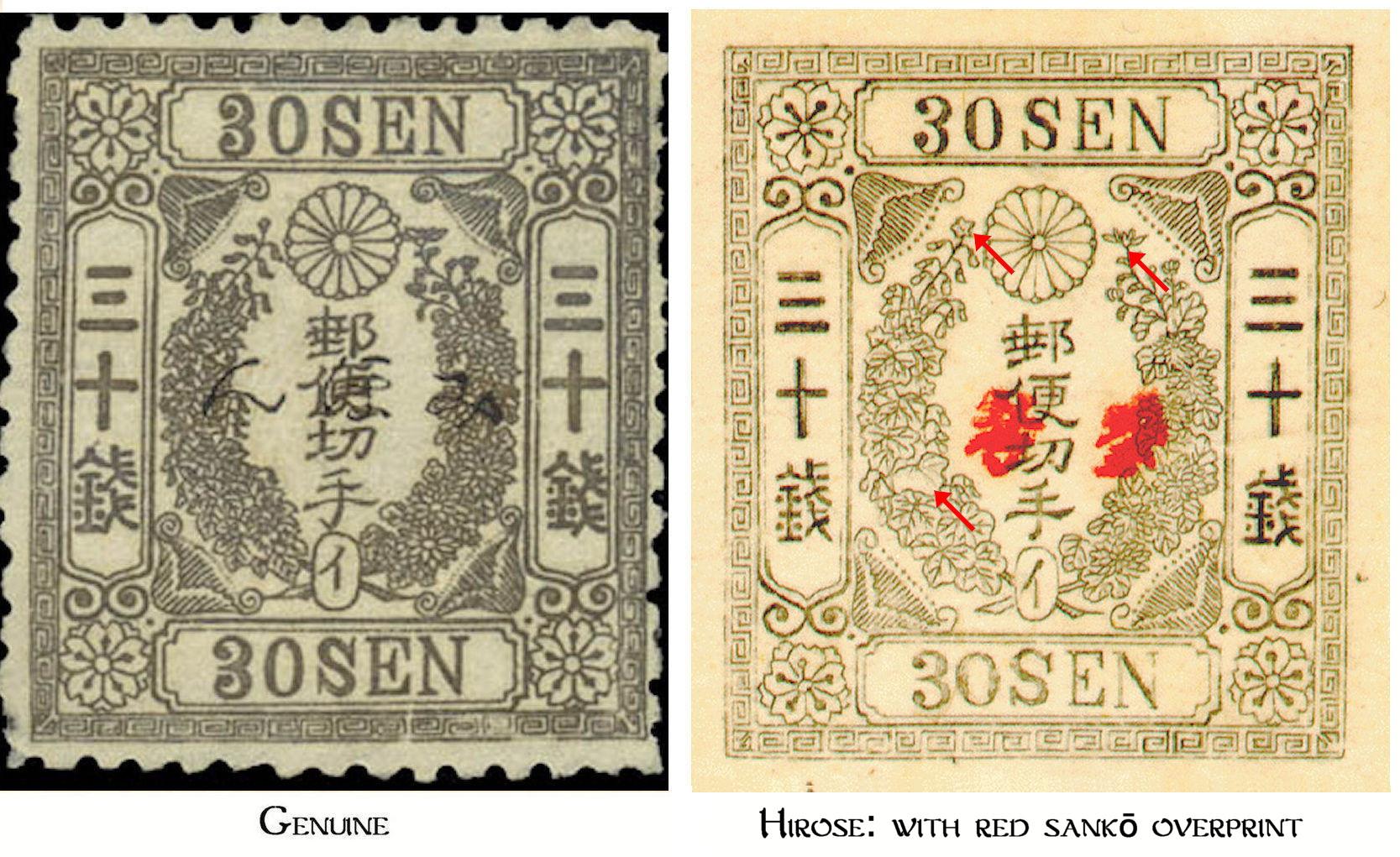 Hirose: (One Die Only)

With red sankō overprint but known without overprint.

Forgery characteristics:
Star instead of flower;  weak veins in leaf; and bud missing. 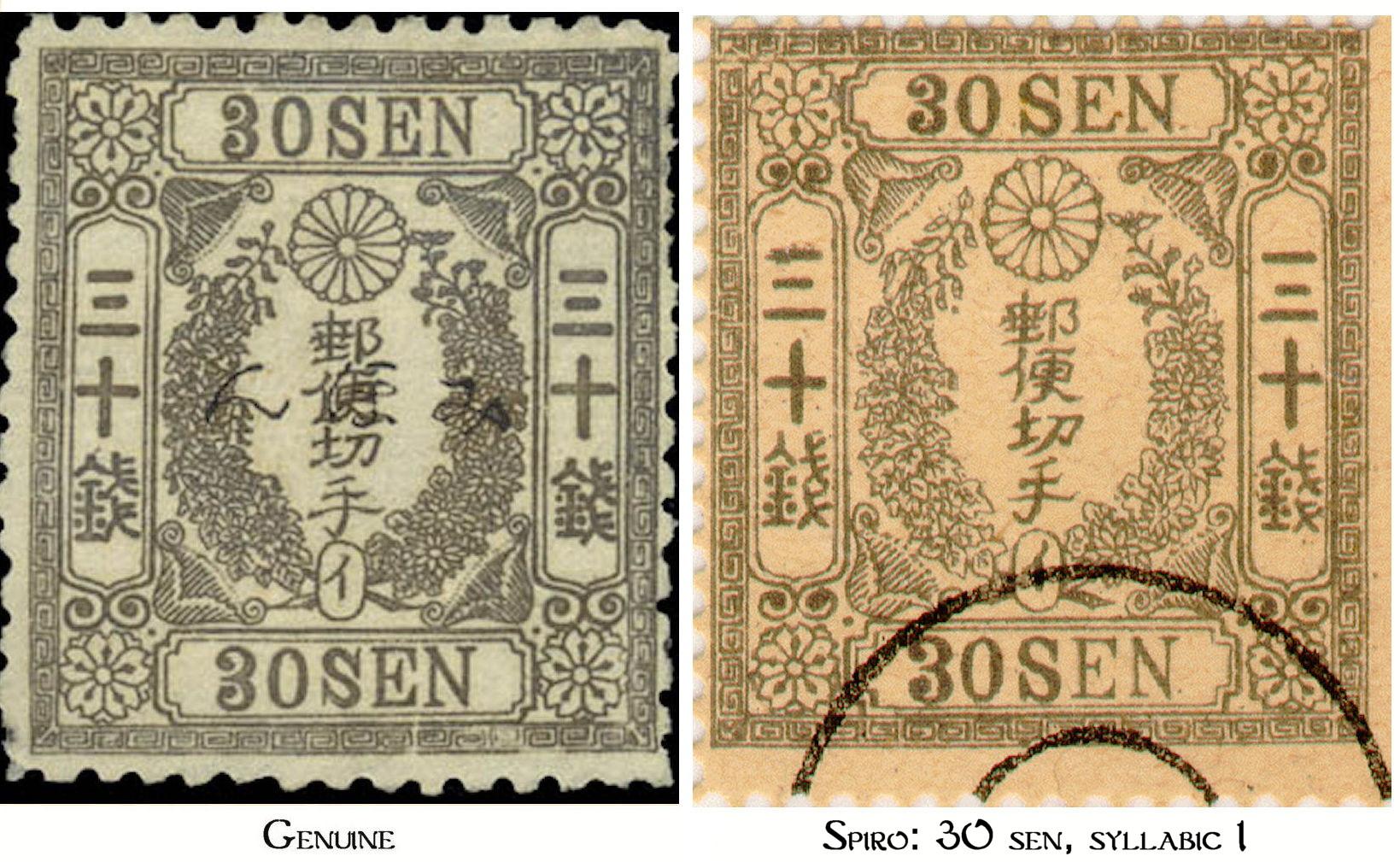 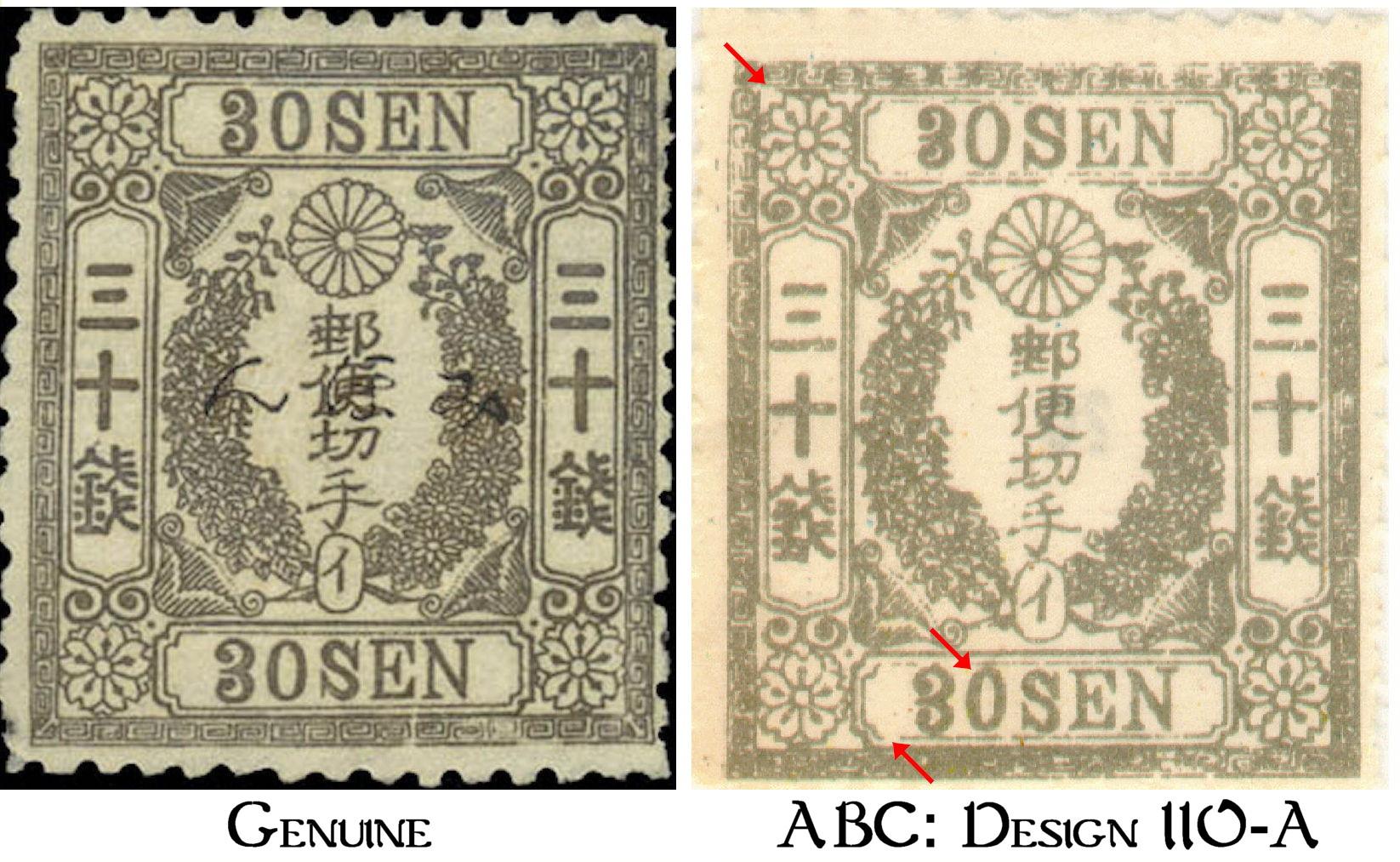 Characteristics of Design 110-A: 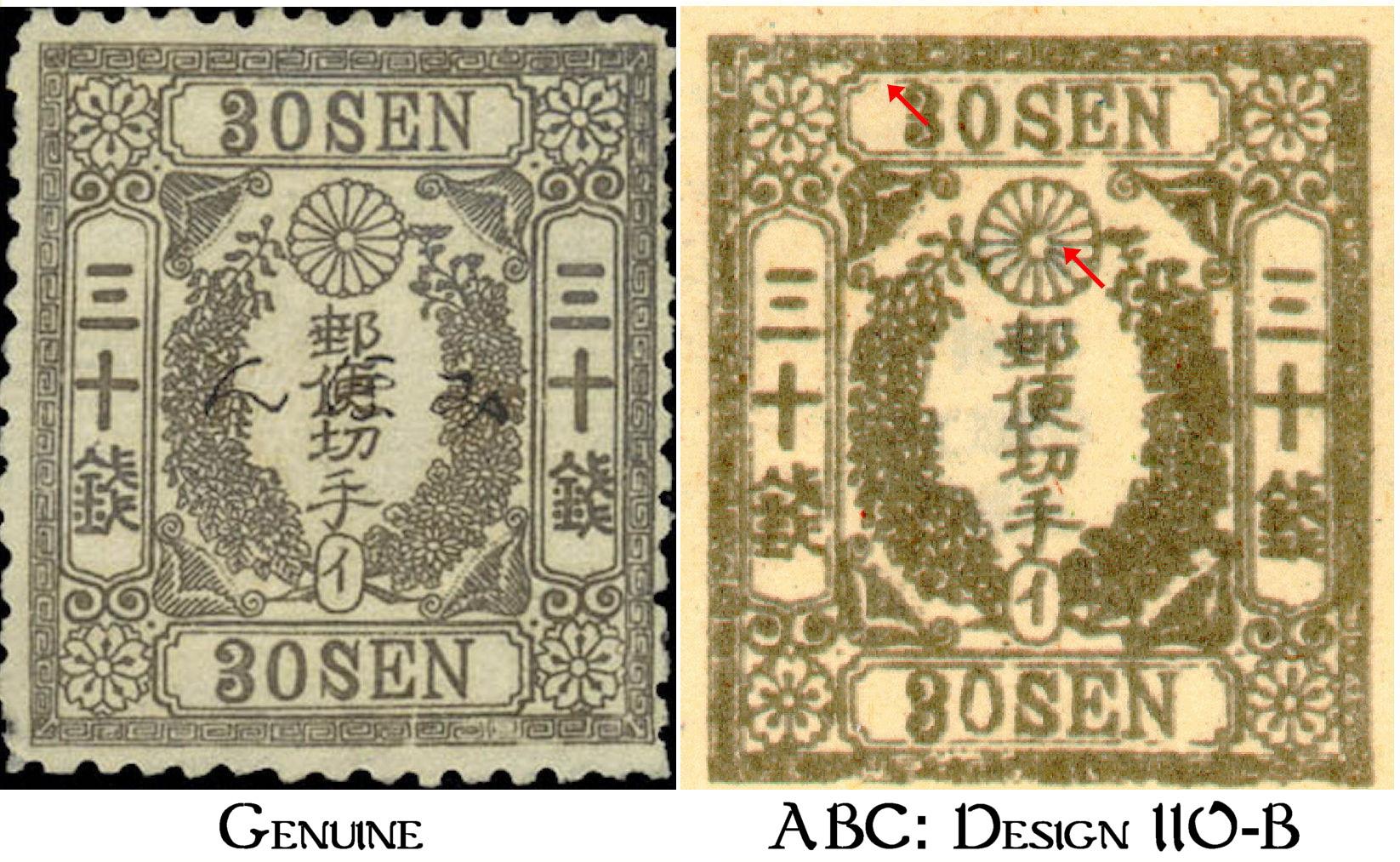 Characteristics of Design 110-B: 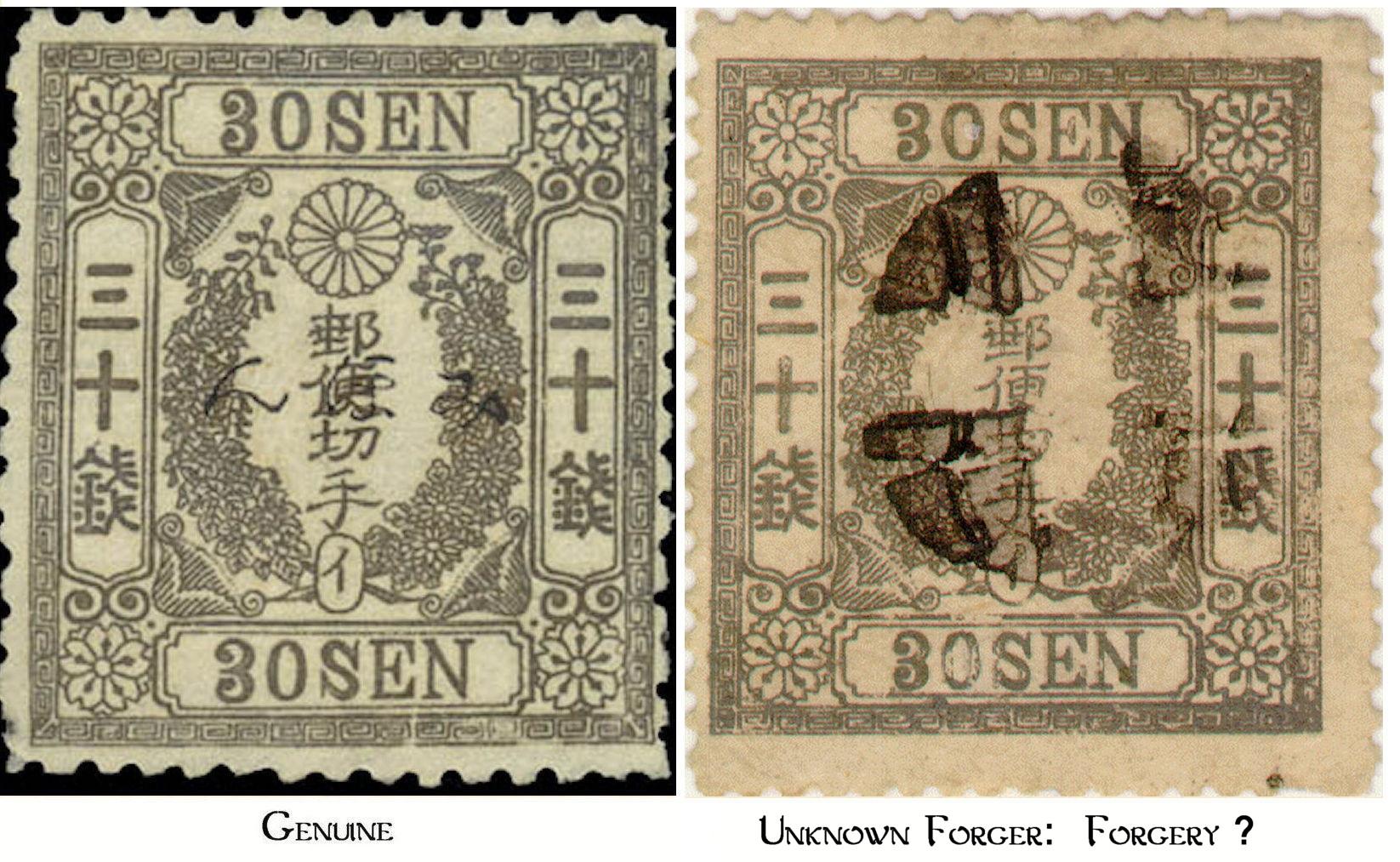 If this stamp is typographed as described on the CO-ROM monograph, it is a forgery.  However without seeing the actual stamp, it is impossible to tell from a scan whether it is typographed or engraved.  If it is an engraved stamps, it is either genuine or one of the most deceptive forgeries ever seen.  If typographed, the design is very deceptive. 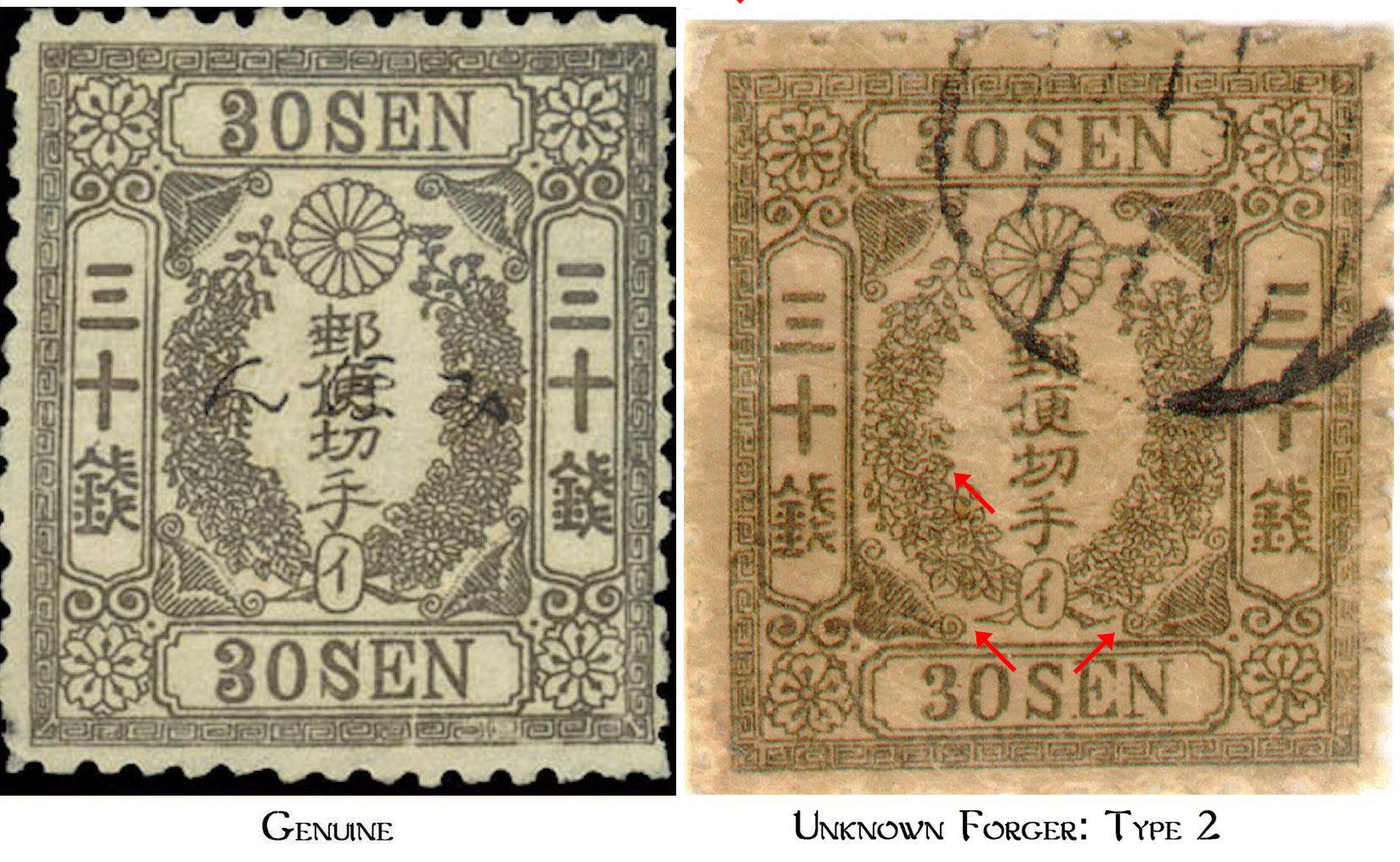 Genuine:  Kiri (Paulownia) branch has 3 flowers.  Forgery: branch has 2 flowers with a third flower lower coming off the leaf.

Genuine: Stem of each side of syllabic touches or almost touches the corner ornament.  Forgery:  More space between stem and corner ornament on both sides. 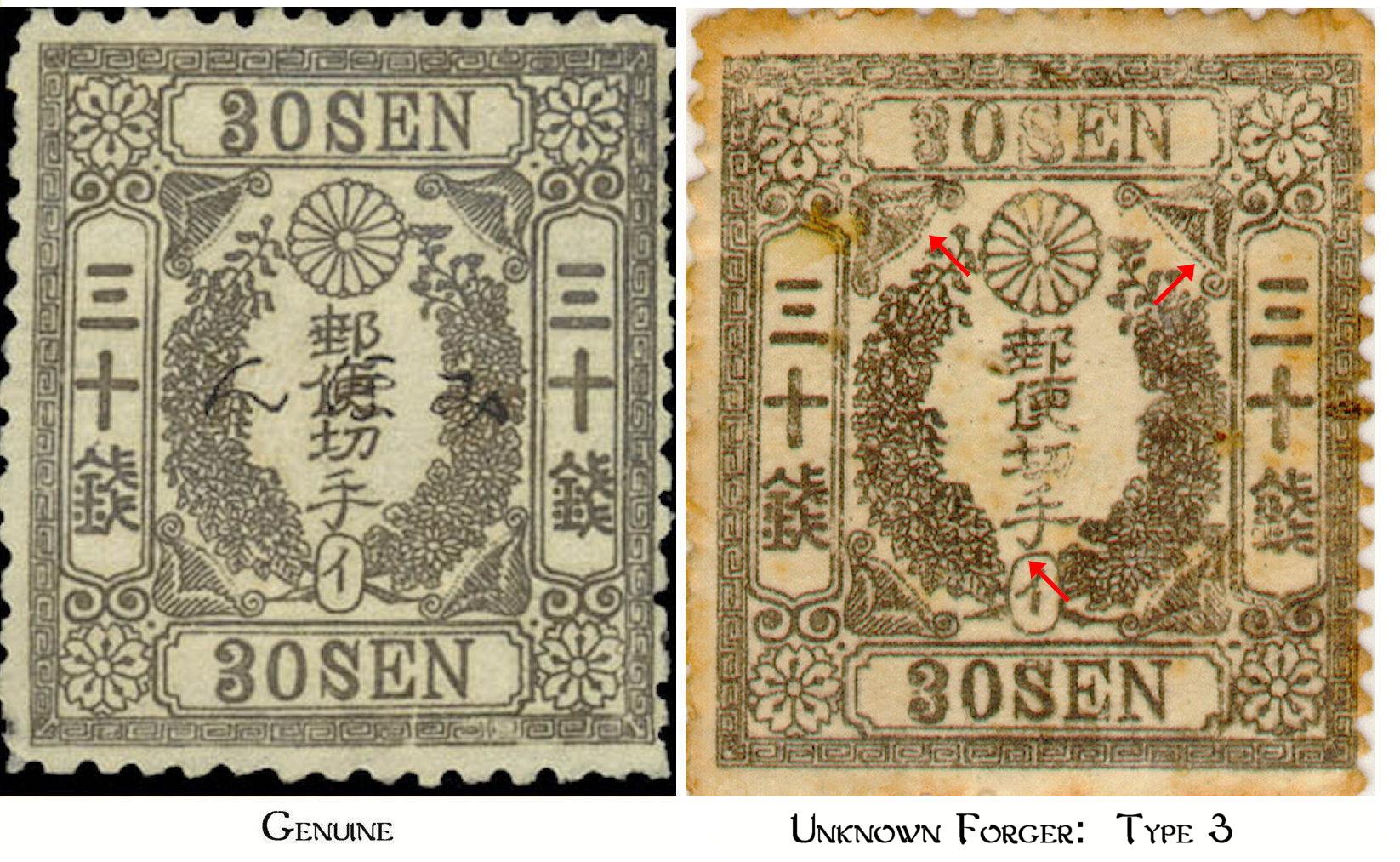 This is another very deceptive forgery, but the characteristics shown by the red arrows, do not occur all in the same position in the genuine.

Forgery Characteristics:  Dots at the edge of the corner scrolls are not perfectly aligned.  The oval that encloses the syllabic is slightly flat at the NW. 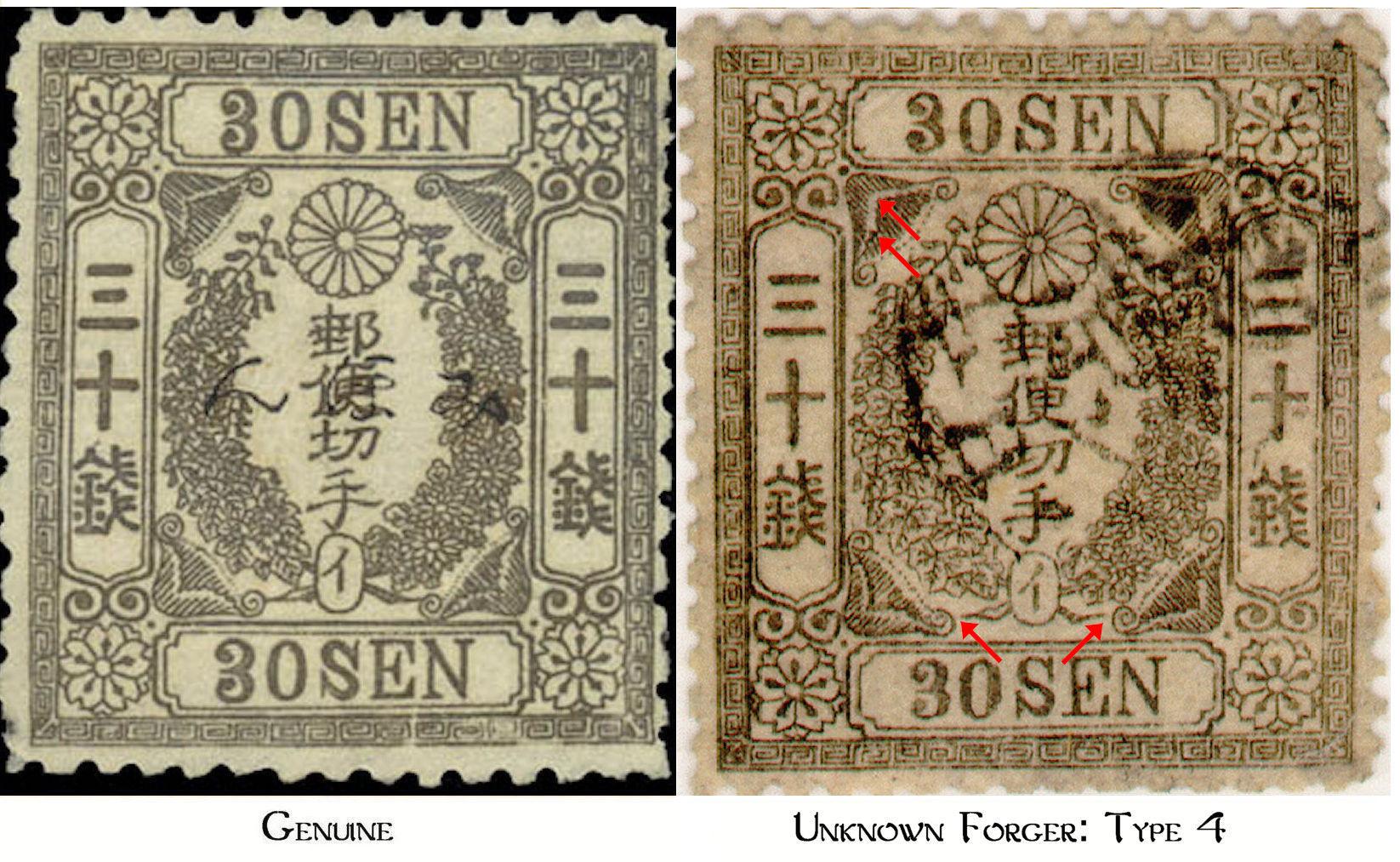 Genuine:  Corner ornament inner zagged line more even and closer to back section.  Forgery: V shaped notch in inner line and further away from back section.

Genuine: Stem of each side of syllabic touches or almost touches the corner ornament.  Forgery:  More space between stem and corner ornament on both sides. 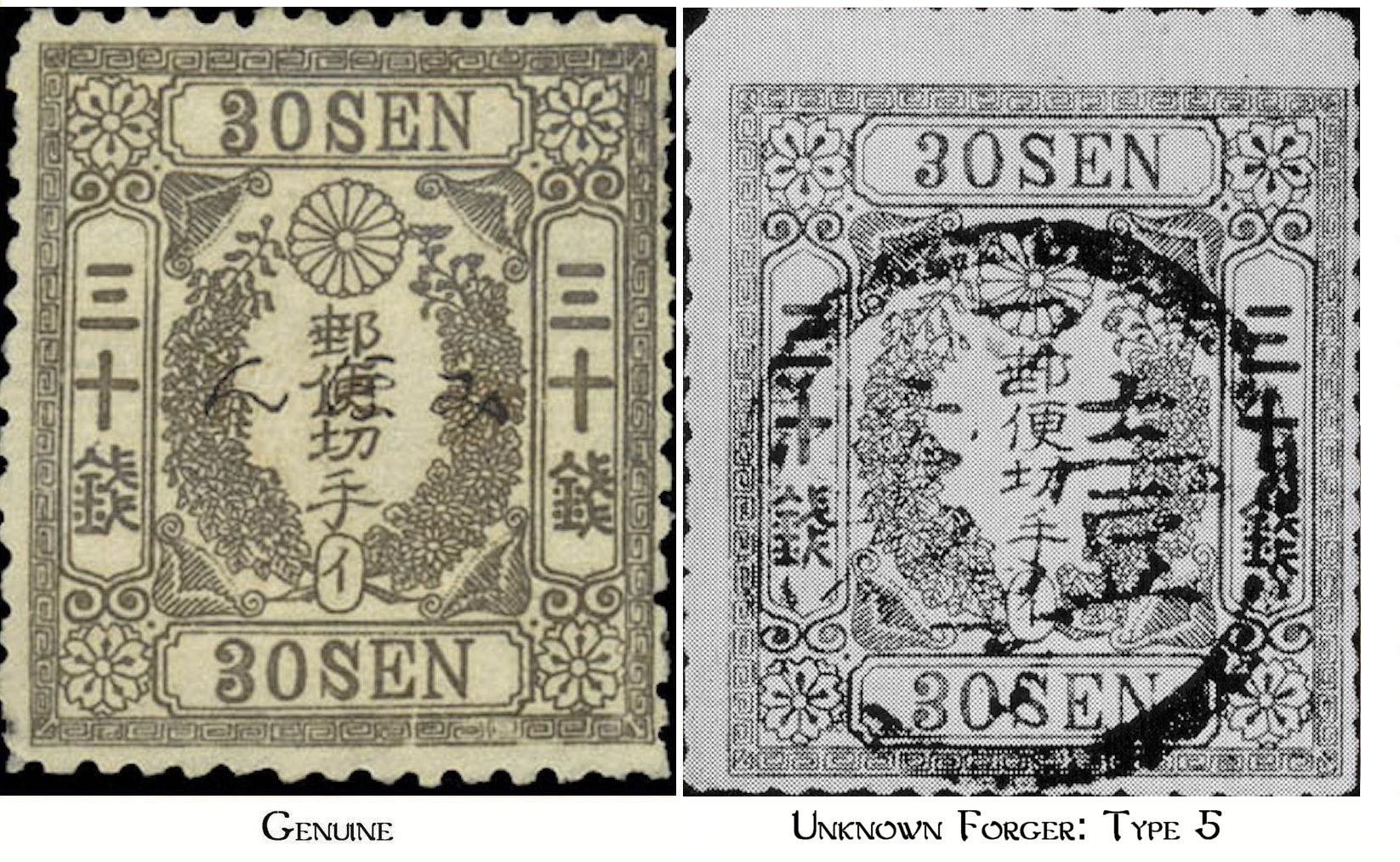 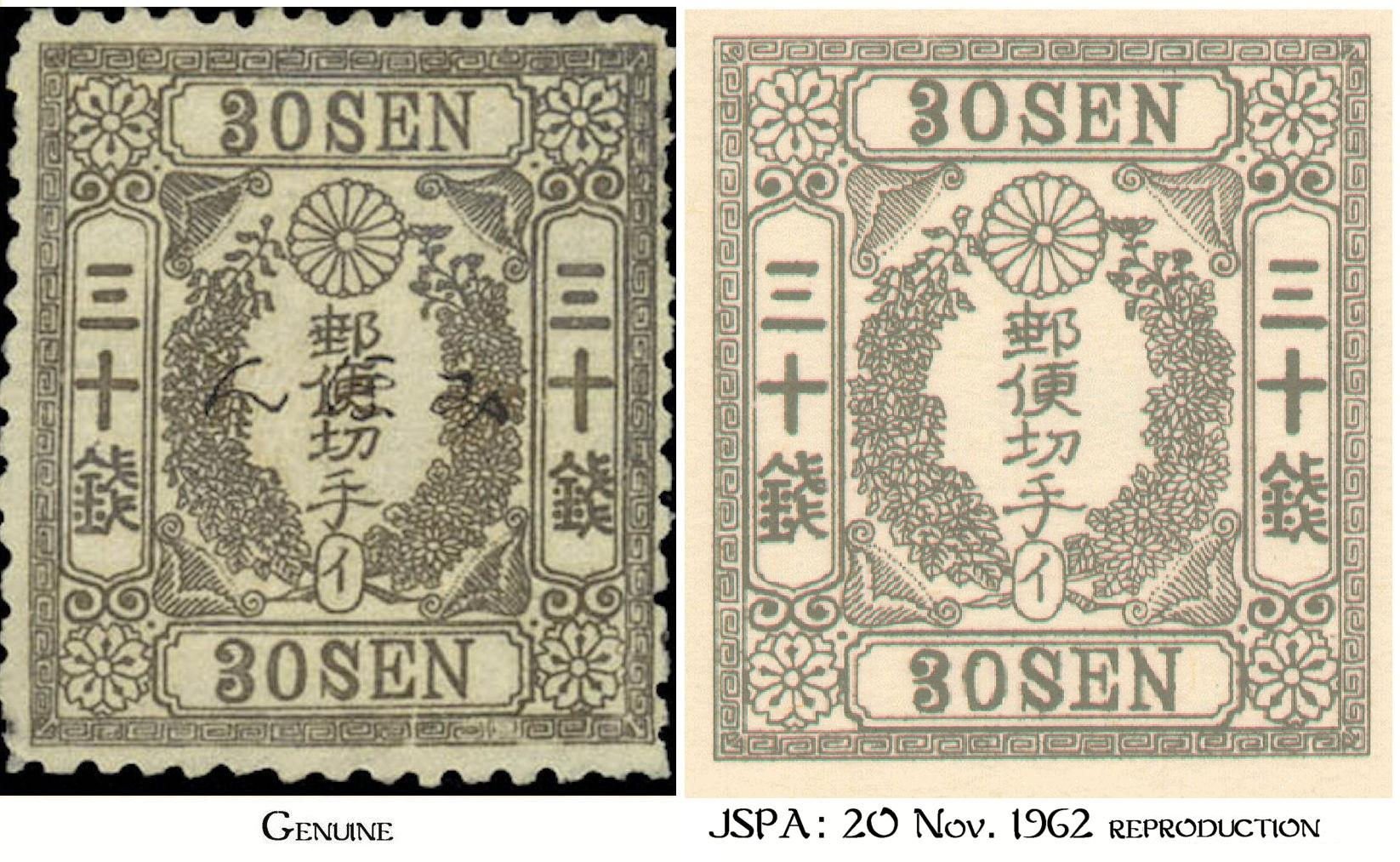 Design taken from a genuine stamp, but the reproduction is of superior quality when compared to the originals. This is from card No. 9 in the series and is on wove paper to imitate the wove paper of the original.  Click here to see more information about JSPA reproductions.