Beginning in the 1950’s, a large number of offset-printed forgeries were sold in department stores in Japan. These forgeries were produced in great numbers from the early 1950’s until the 1960’s. The first advertisement known was in June 1954. The first group consisted of eight dragons and 37 Cherry Blossoms. They were placed in small transparent envelopes with a folded sheet of paper. These forgeries were printed in se-tenant blocks of all designs, four such blocks comprising the original printing sheet 15 1/2 x 21 inches. Early forgeries were on gray-white paper and bore a catalog number and the denomination printed in gray ink on the reverse. Later printings were on white paper and show only the catalog number on the reverse side.  One group without numbers was all cancelled with the same date. They are not very deceptive, but the number sold must have been very large.

They are poorly printed by offset-lithography from photographs of genuine stamps. Despite the poor quality of the printing, the designs were faithfully copied from the genuine. In the case of the Dragon forgeries it has been possible to identify the plate and position number of the genuine stamp copied.  These fakes differ from genuine stamps in color and perforations as well as paper and printing method.

The states represent the known changes over time with the numbers or lack of numbers on the reverse.   All except state 4 are uncancelled and have JSDA catalog numbers on the back.  State 4 does not have a catalog number and is known only cancelled with a small circular fake cancellation dated ‘35.4.1’ (1 April 1960). This seems to be about the time state 4  was produced.  It is believed that the numbers on the back are the same as the catalog numbers found in the Japanese Stamp Dealer Association (JSDA) catalogs.  The JSDA catalog numbering system changed during the period of time that these stamps were produced.  For instance the 48 mon dragon stamp is no. 1 in all states, but the 1/2 sen brown cherry blossom with crossed branches is no. 11 in state 1, but no. 9 is states 2, 3 and 5.

A vignette letter designation is assigned to identify the different ABC Kurabu club forgery vignettes found.
Note: “Unavailable” in the table below means that the forgery exists, but no graphic is available at this time.

Reverse of the Stamps for the Different States 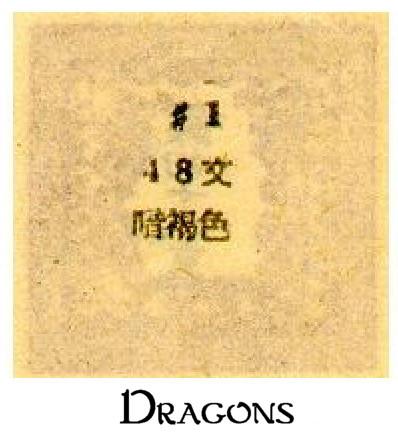 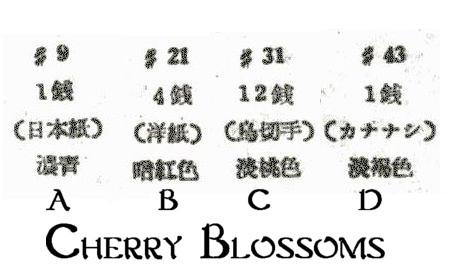 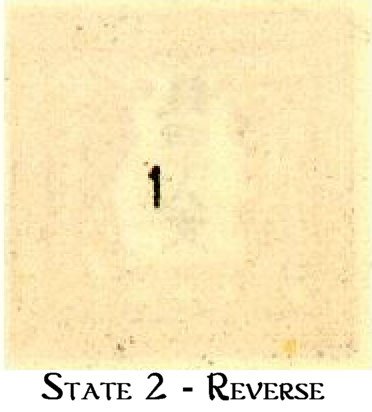 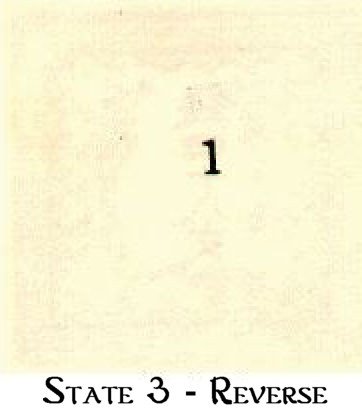 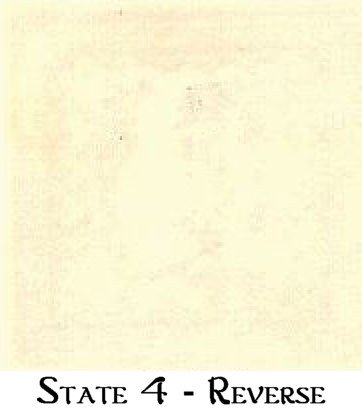 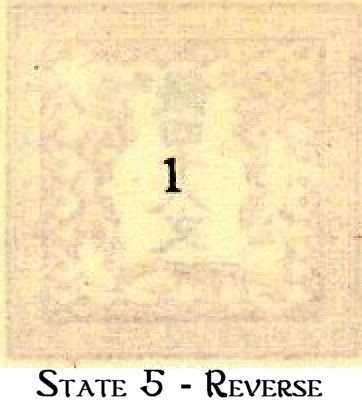 The design numbers are arbitrary and used as a designation to identify the different ABC Kurabu forgery designs found. The numbers in bold are the numbers found on the reverse of the stamps.