(Brown was printed from plate 26 of the earlier blue stamp)

Blue stamps are on wove or laid native paper of varying thickness.  There are 26 known plates with 40 stamps in each plate (each stamp hand etched).  This means that there are 1040 known recognizable different varieties of this stamp.

The brown stamps, issued much later, are on foreign paper. It was printed from plate 26 of the 1 sen blue above when the government ran out of usable plates with syllabics for the 1 sen value.

Reminder:  Only 16 petals or florets in the genuine Kiku Crest (Chrysanthemum Crest)

B.   Genuine: The three top paulownia blossoms are usually slightly separated at the base.  Forgeries: They are joined at a common base in most.

C.   Genuine: The stem of the third paulowina is usually visible, although in many instances the double lines appear as one thick line.  Forgeries: This stem is rarely found in the forgeries. 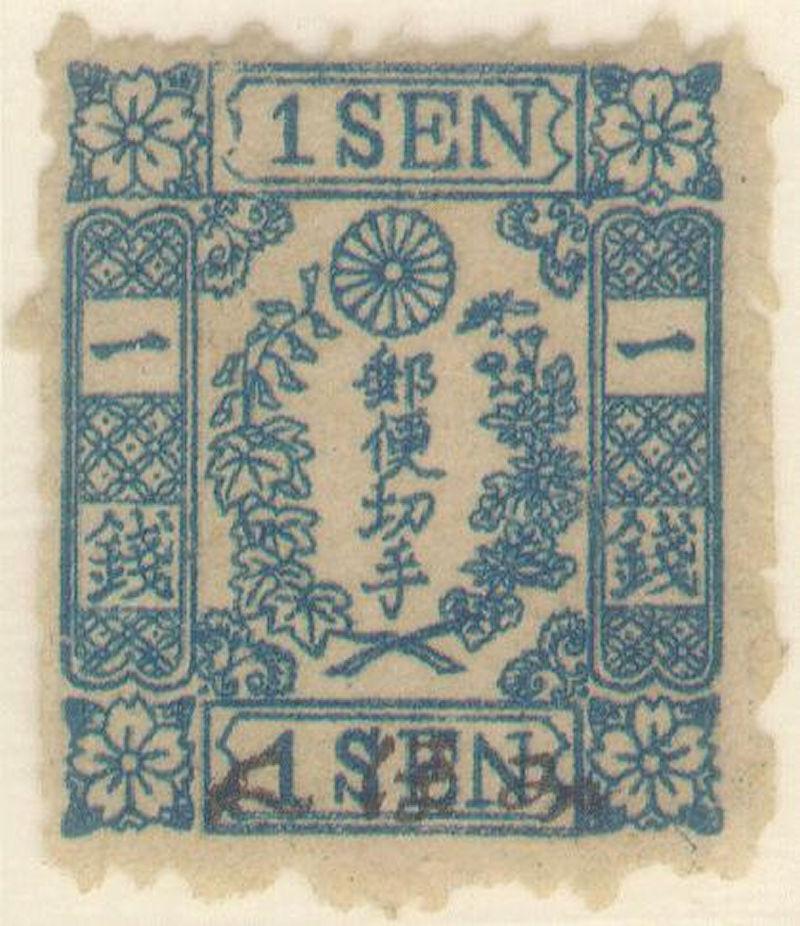 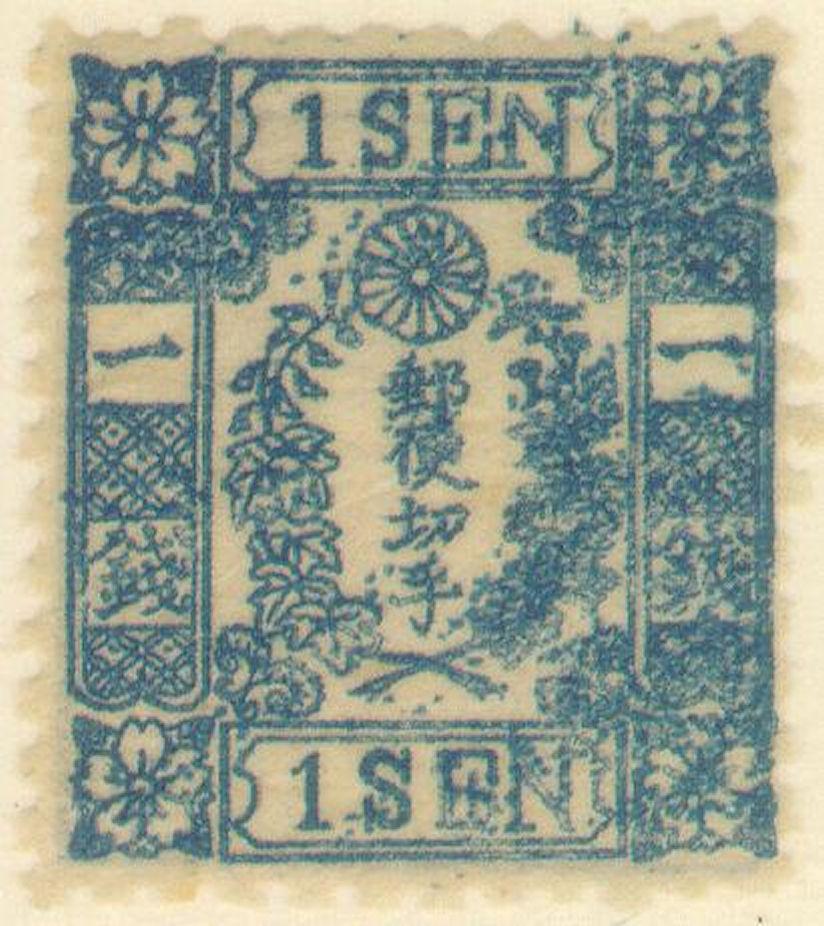 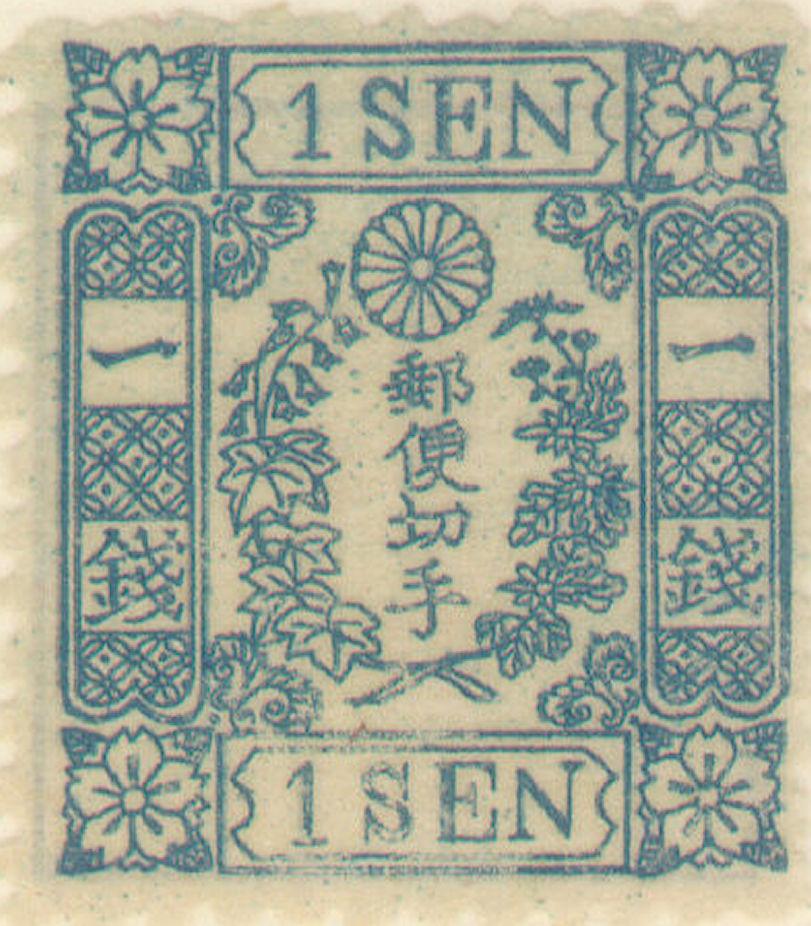 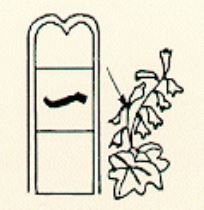 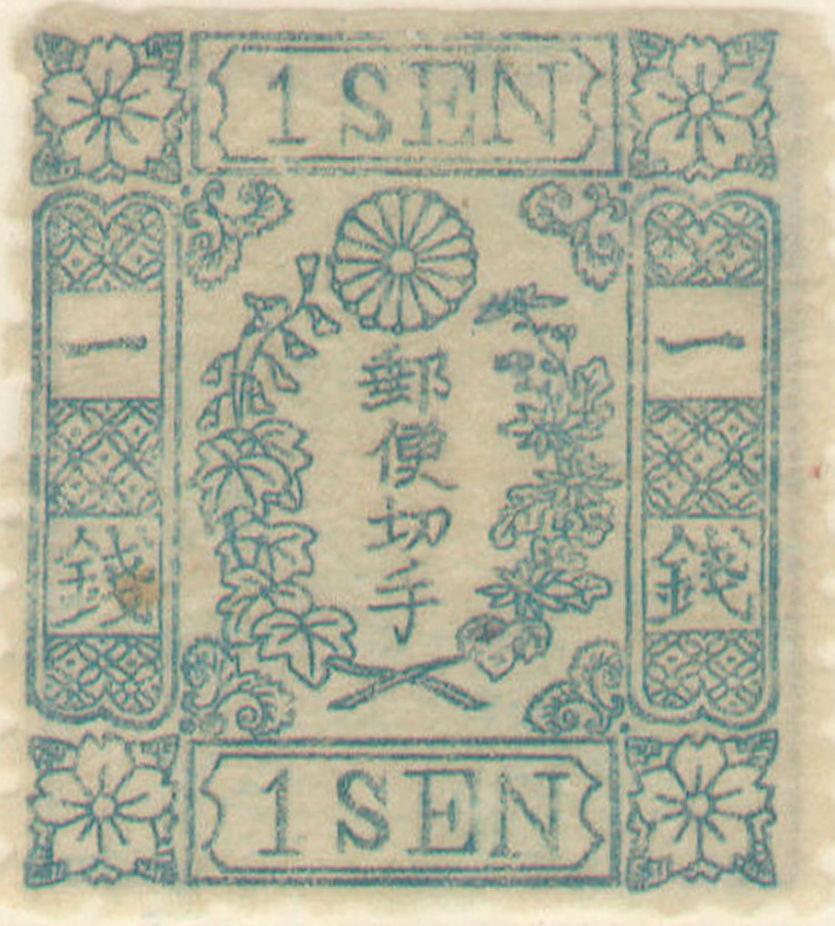 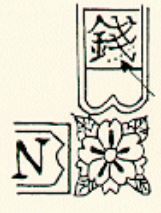 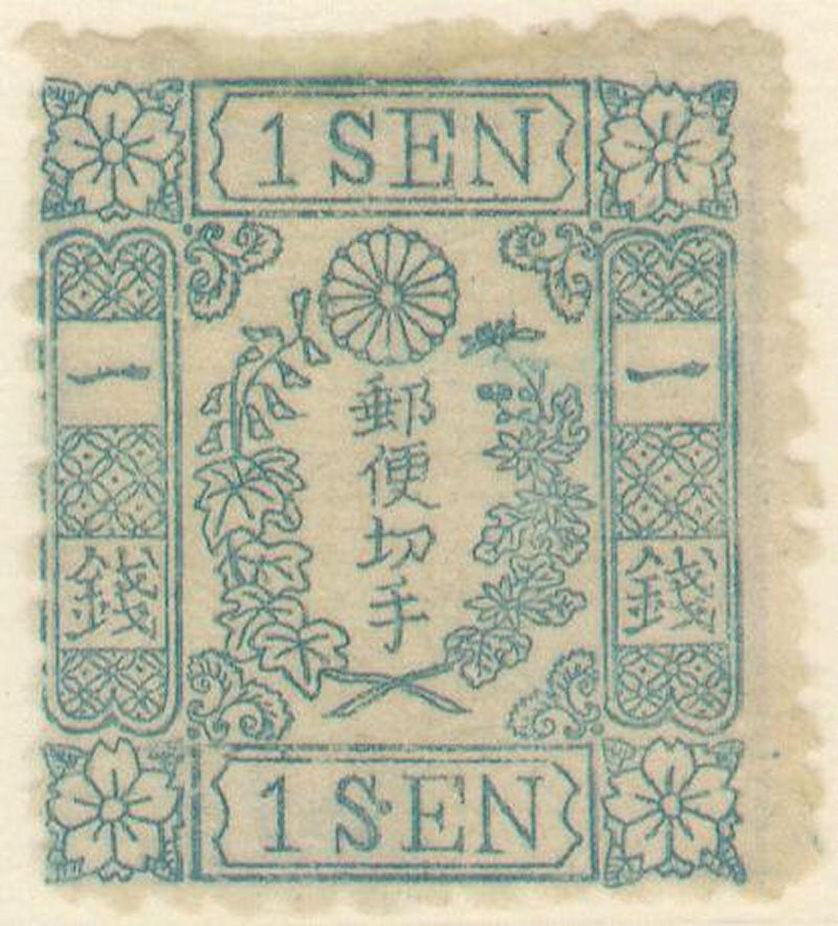 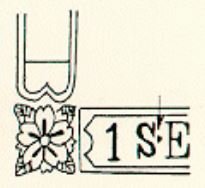 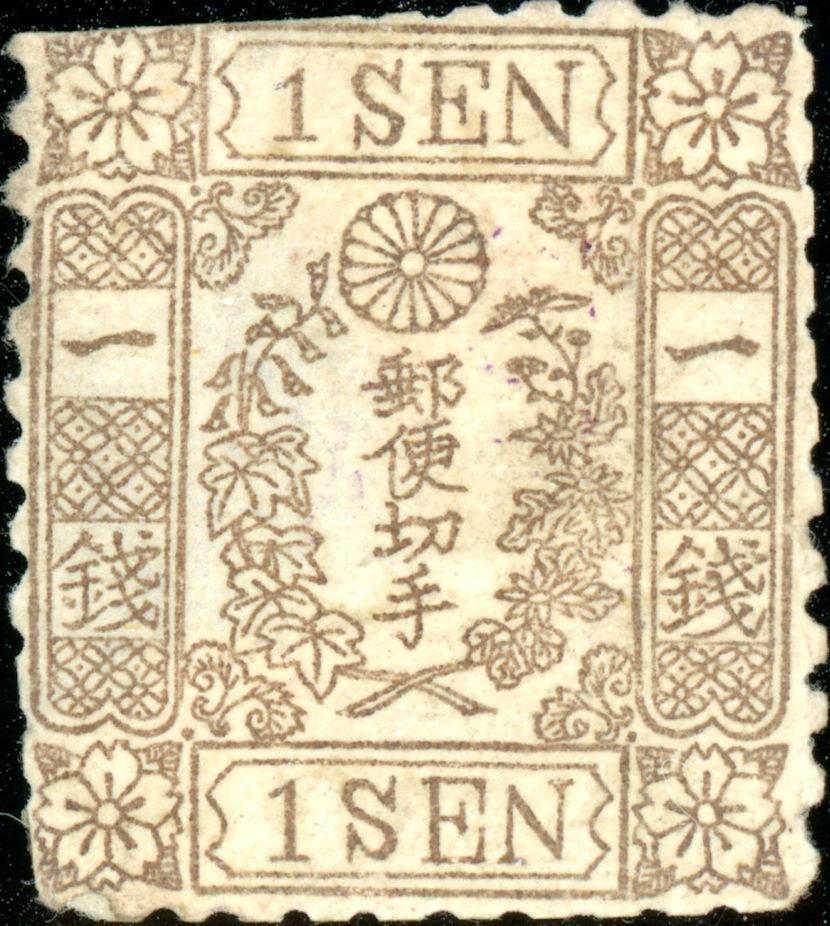 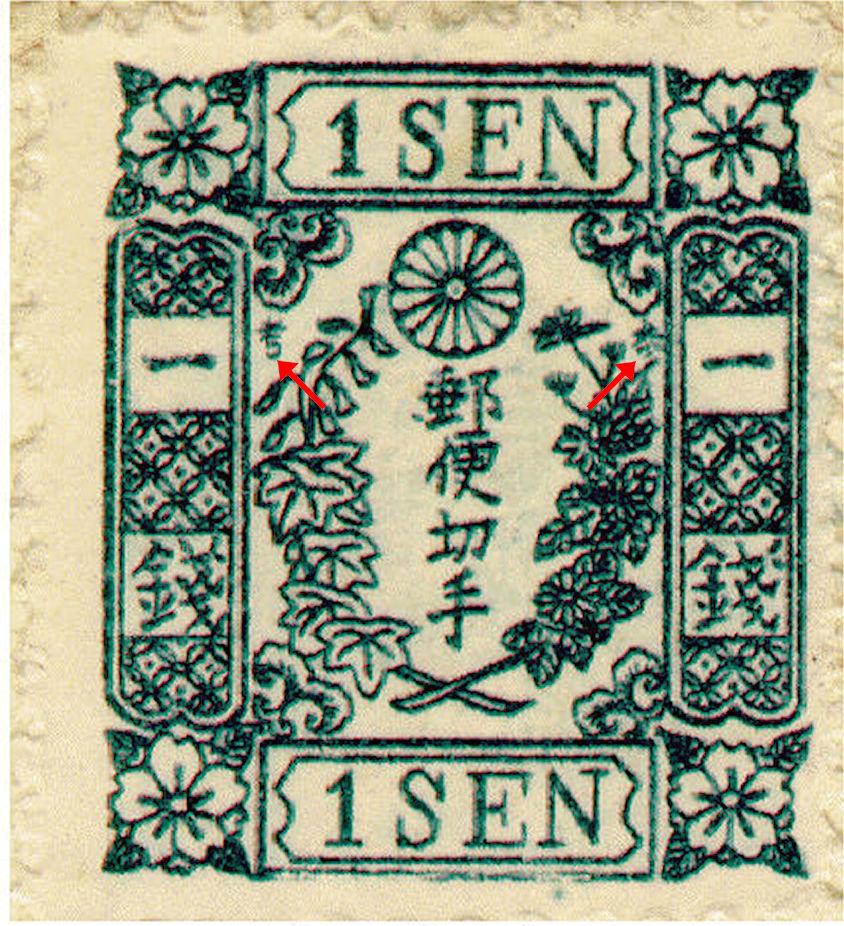 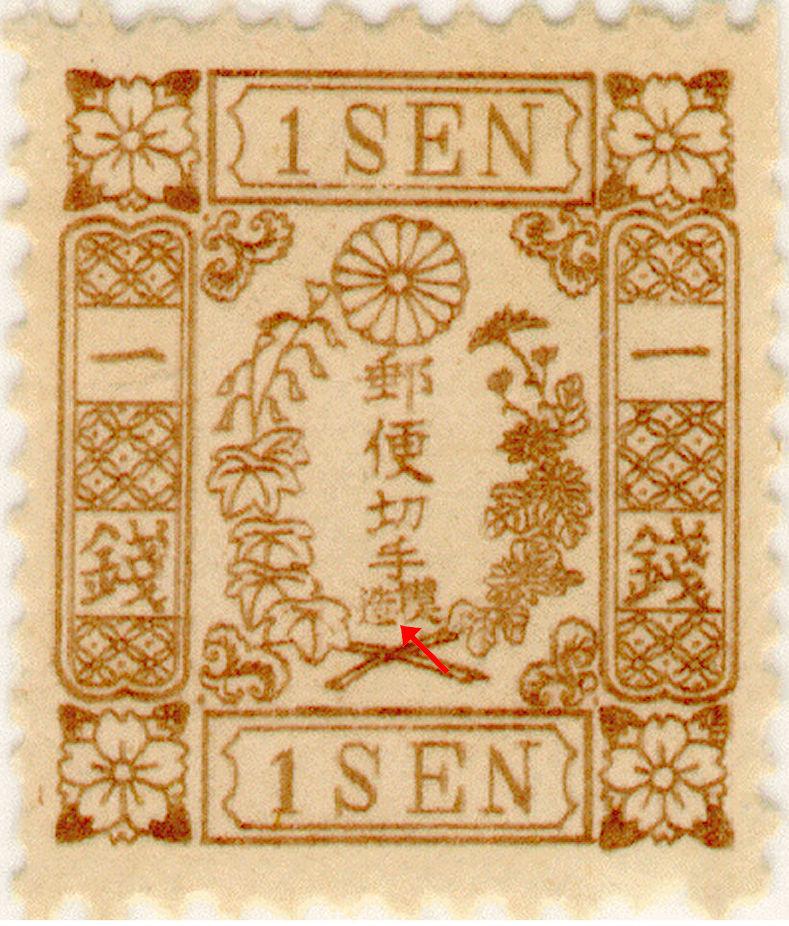 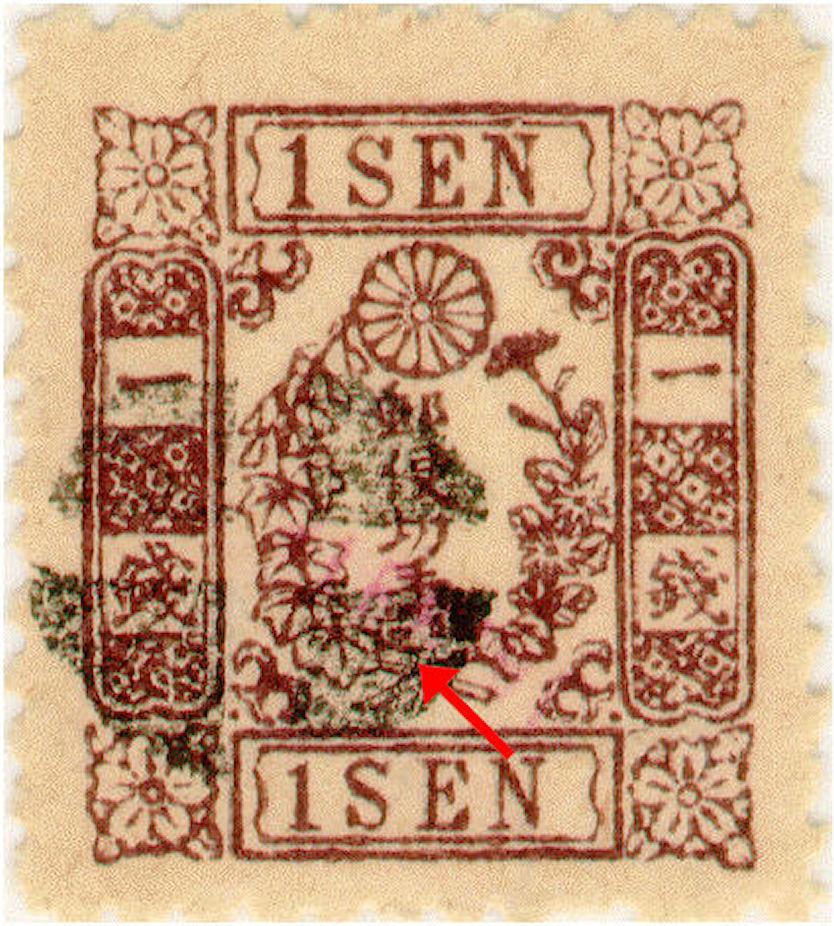 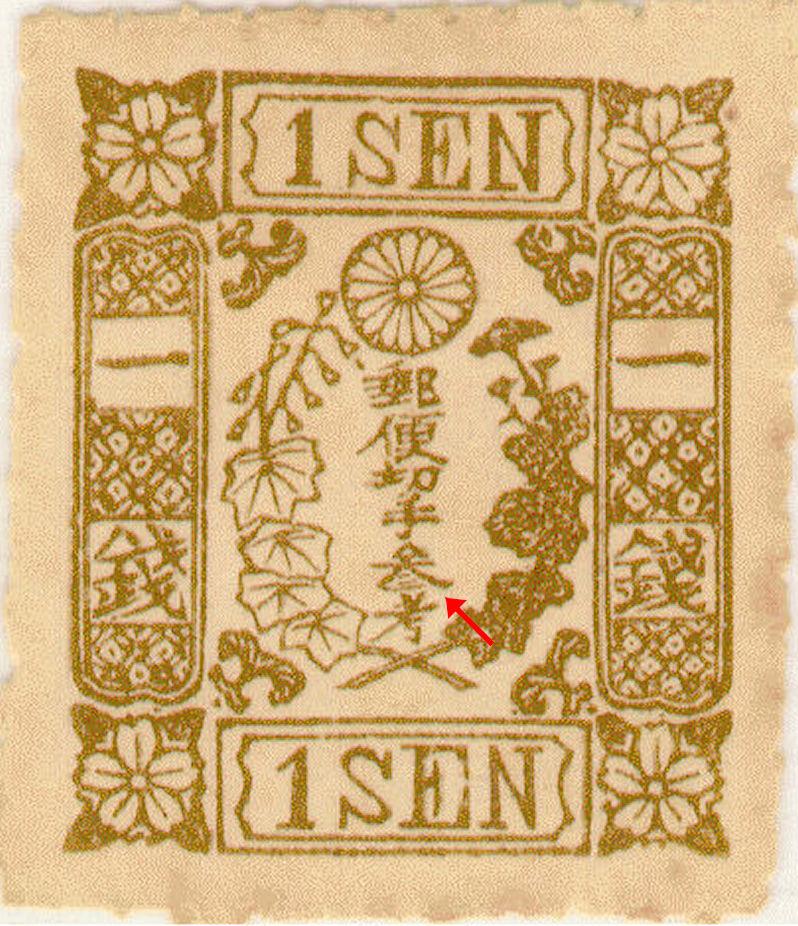 All are shown with a genuine stamp. 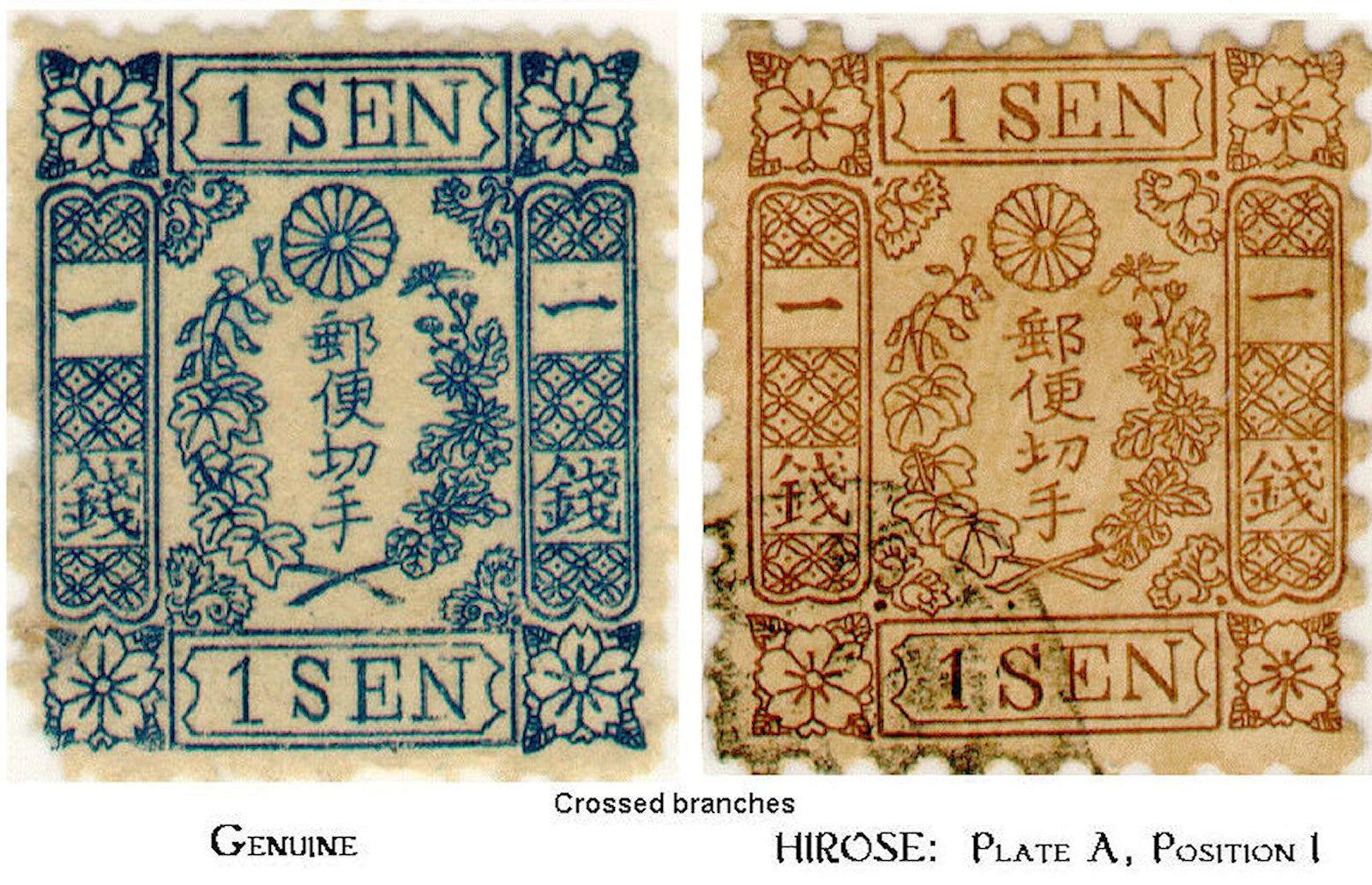 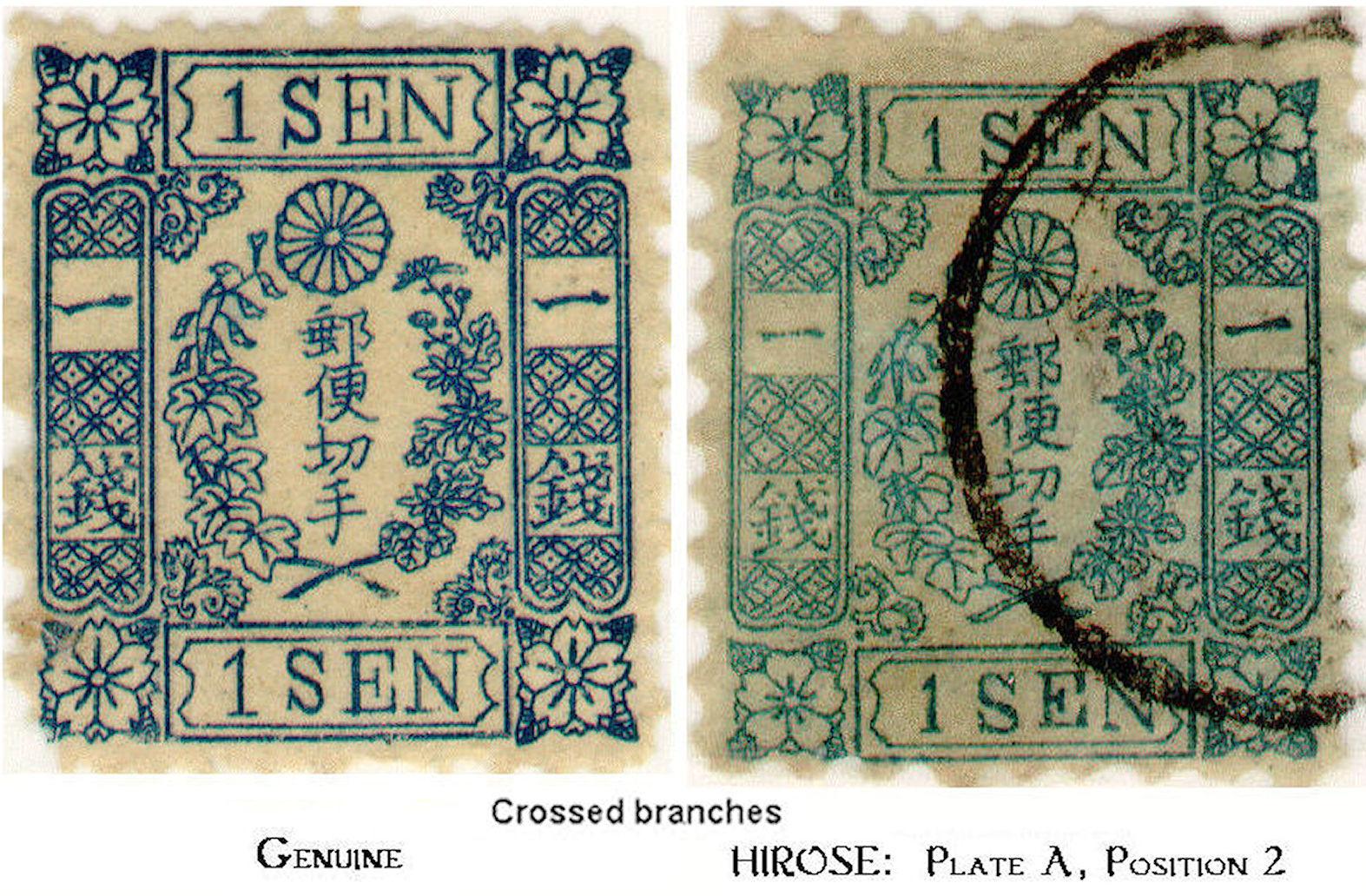 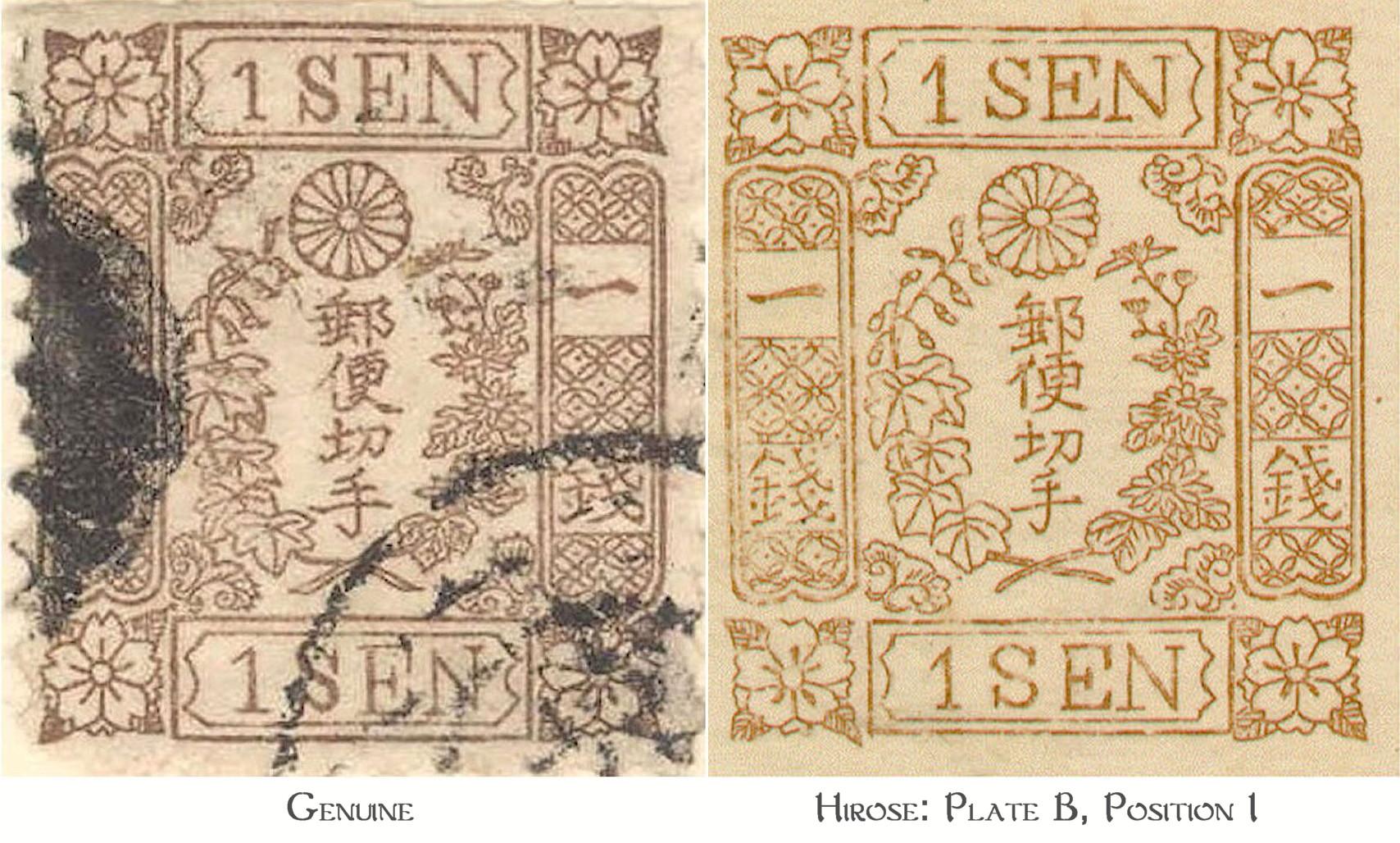 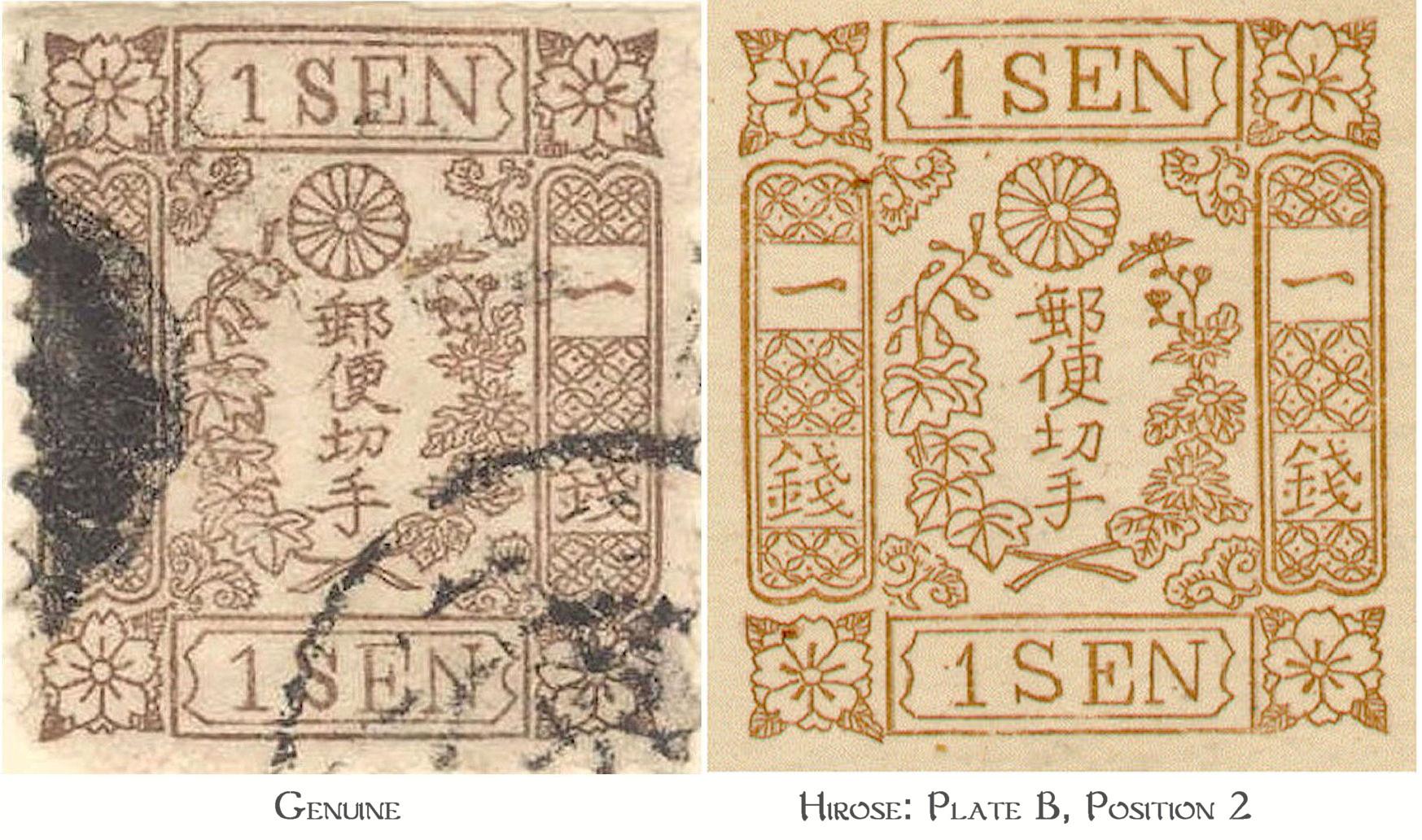 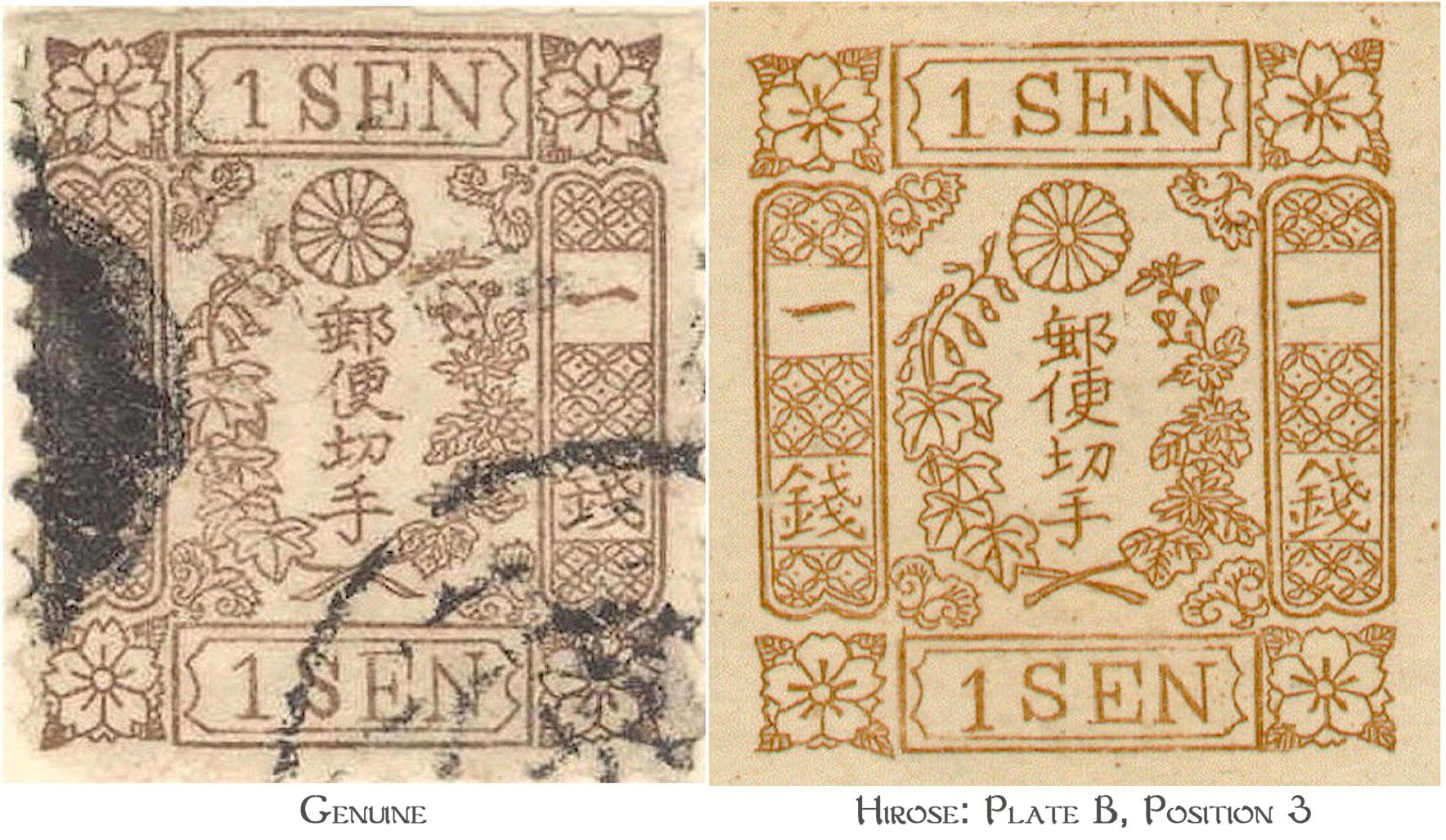 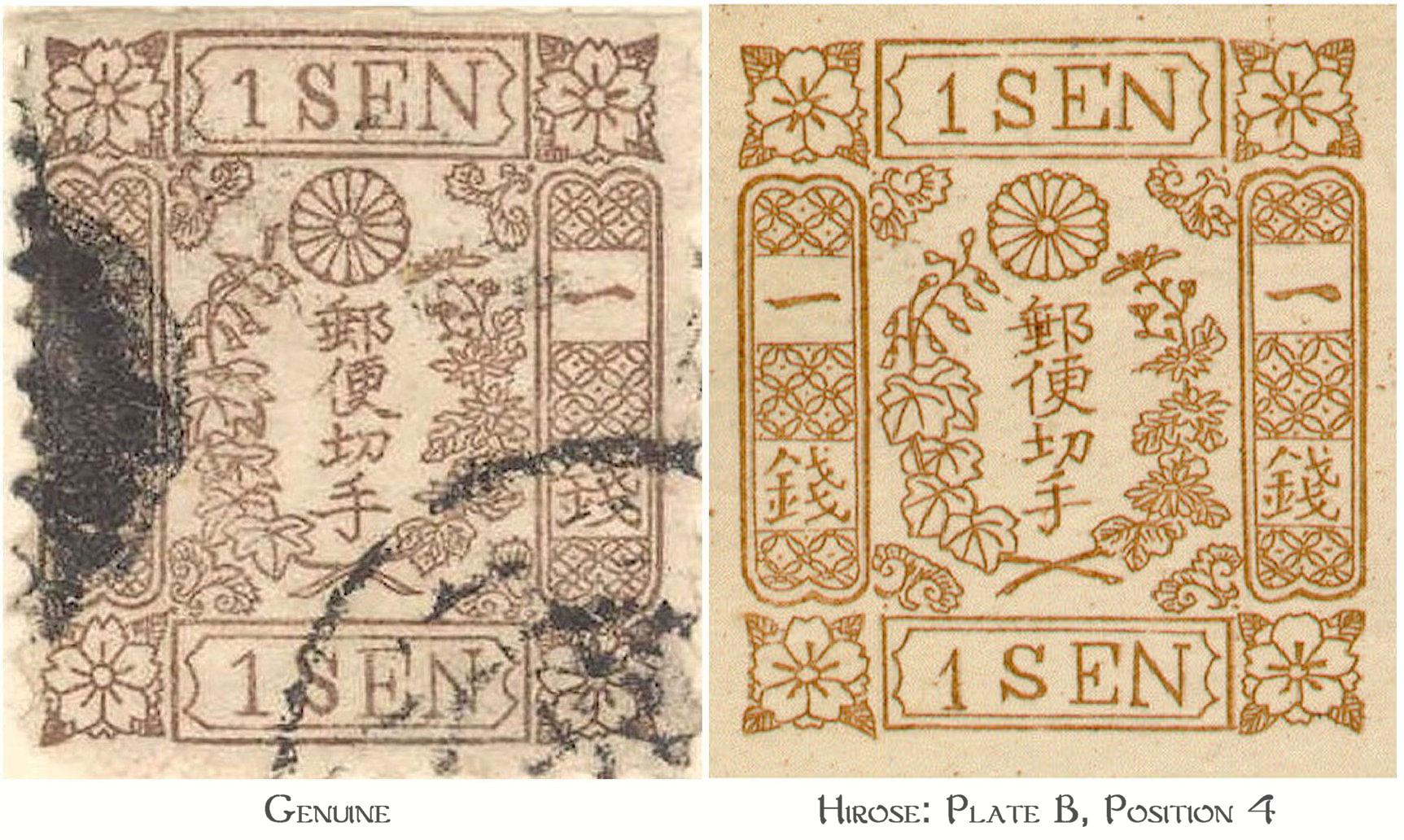 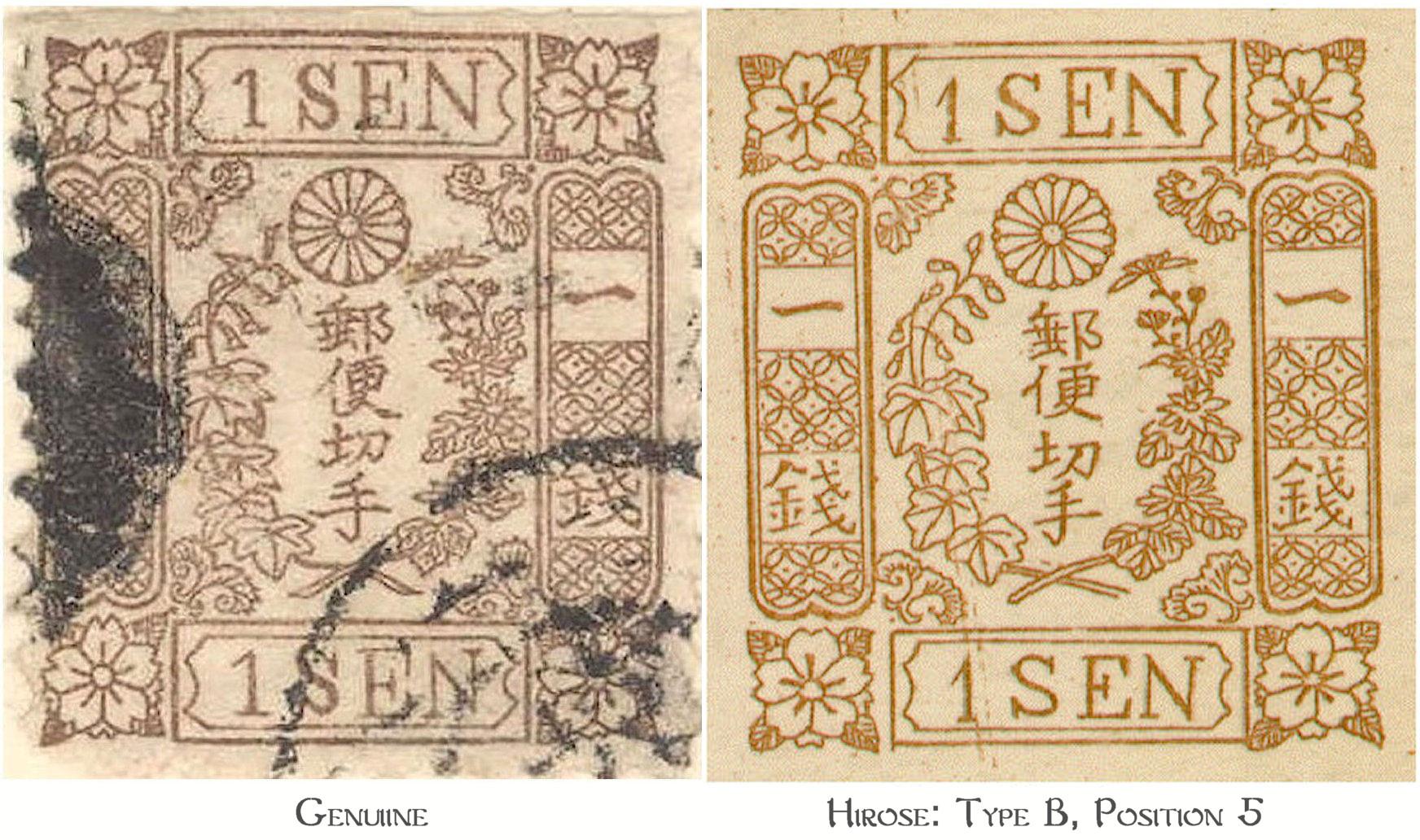 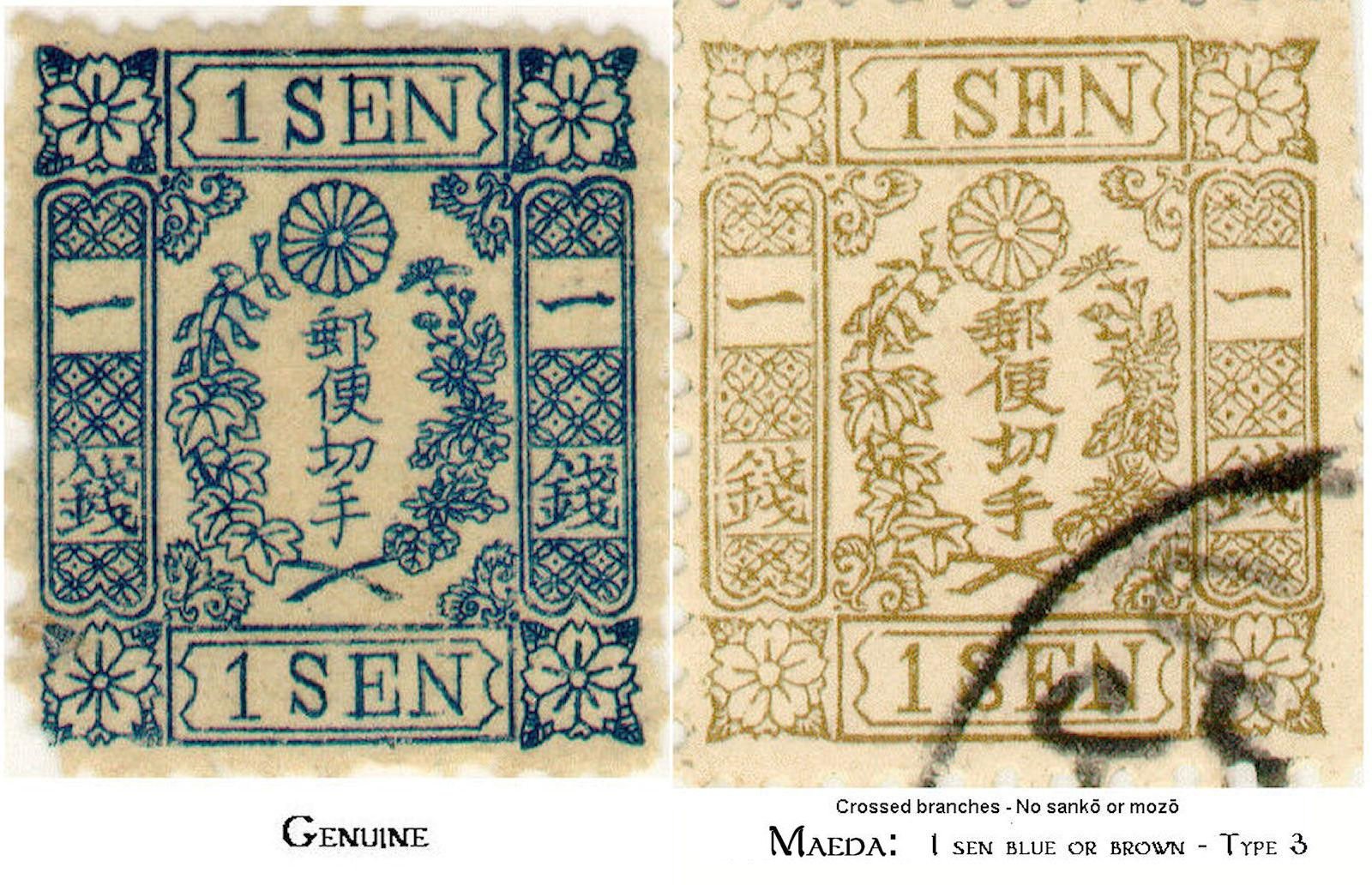 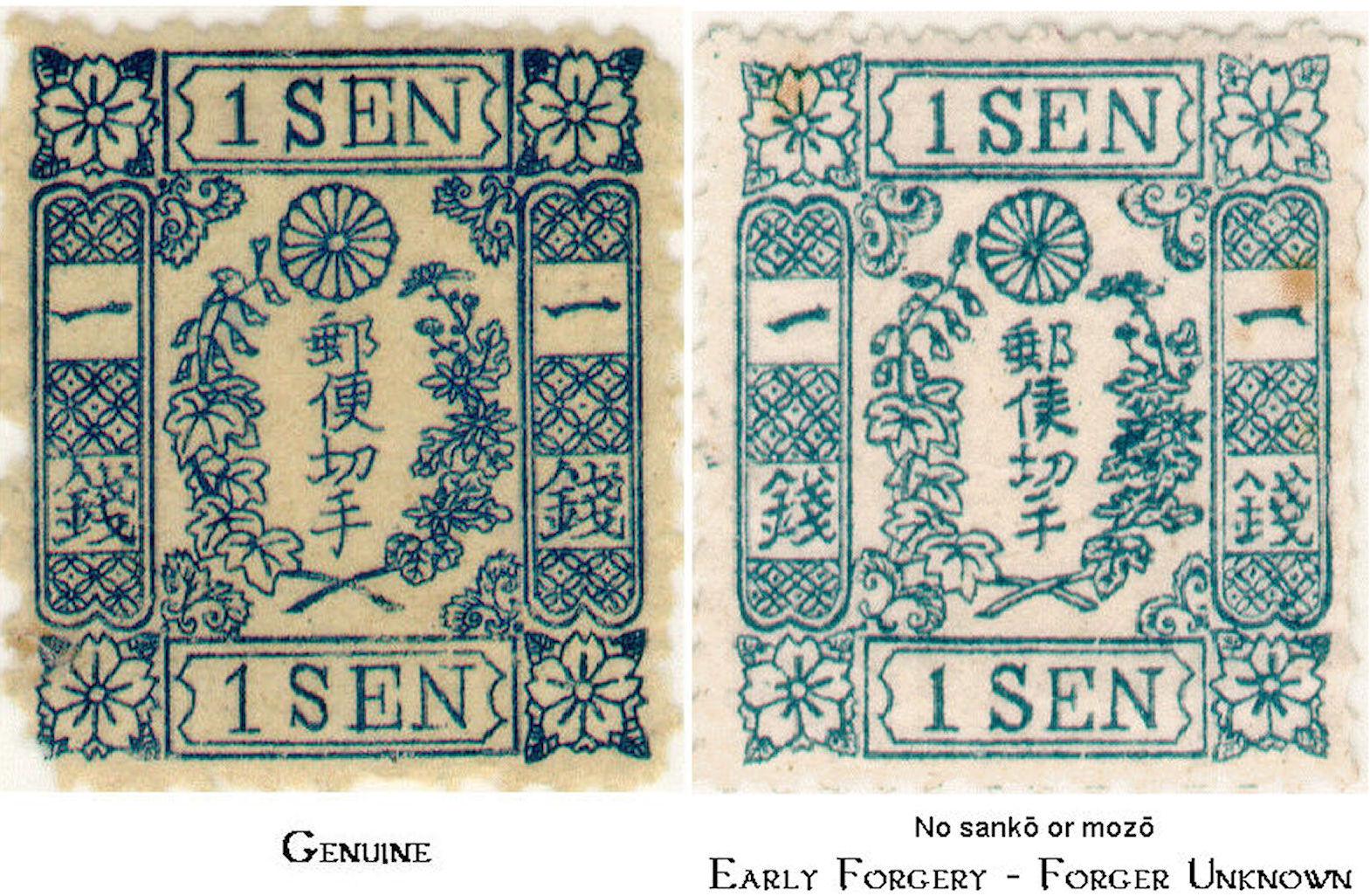 Forger Unknown – One of the early forgeries discovered 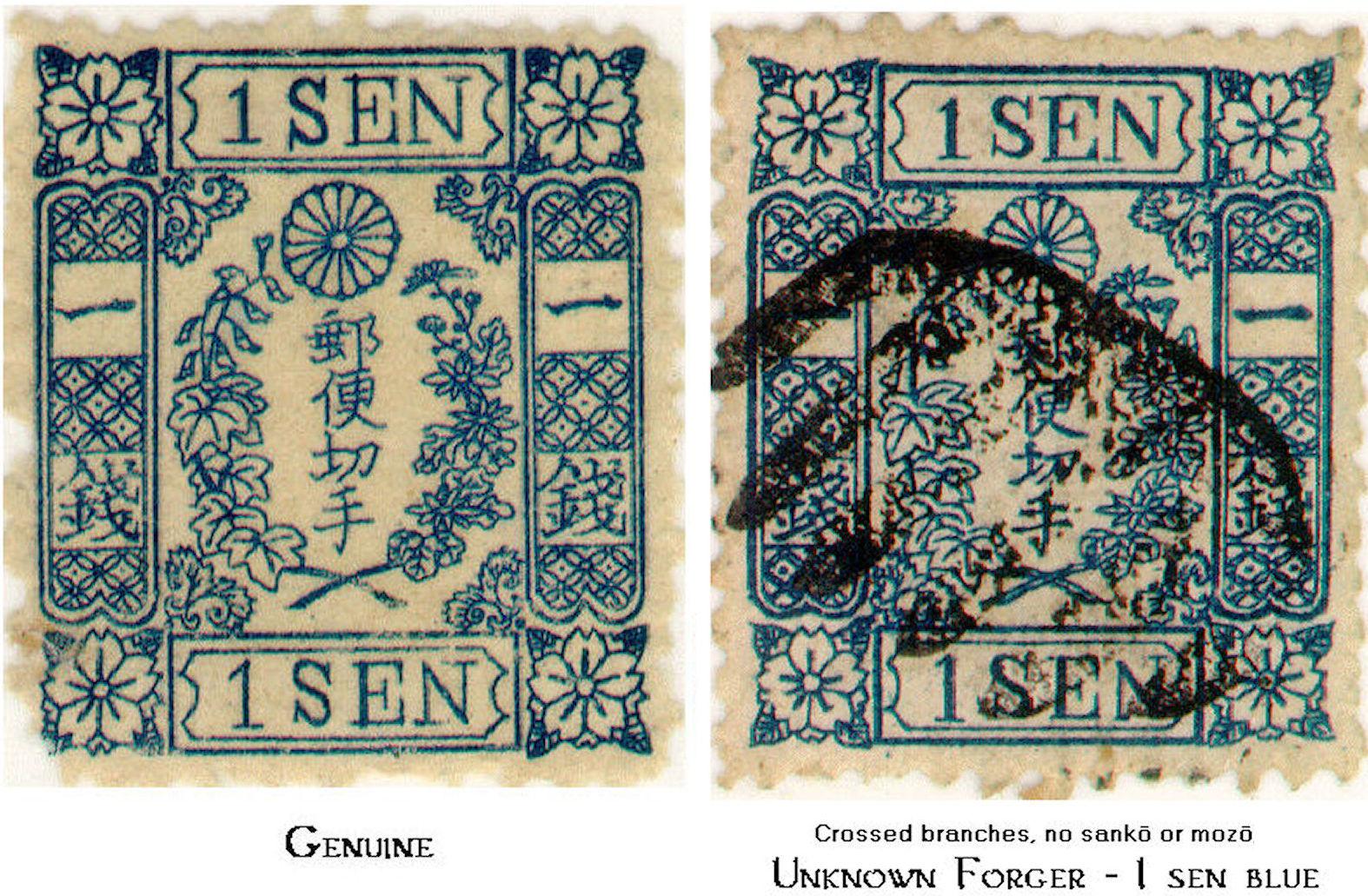 Characteristics of Design 101-A:

Characteristics of Design 101-B

The genuine stamps were printed in both blue and brown, but these forgeries are known only in blue.

Woodward says on page 279 that the four stamps pictured above, from plate 172 in his book, are four of only five known stamps of this “postal forgery”.

This is the earliest “postal forgery” described by Woodward.  He says it’s on “peculiar native wove paper”.  All the rest of the “postal forgeries” are described as being on heavily grained foreign wove paper.  With either description, it is clear that the paper was different from the papers of the genuine stamps. 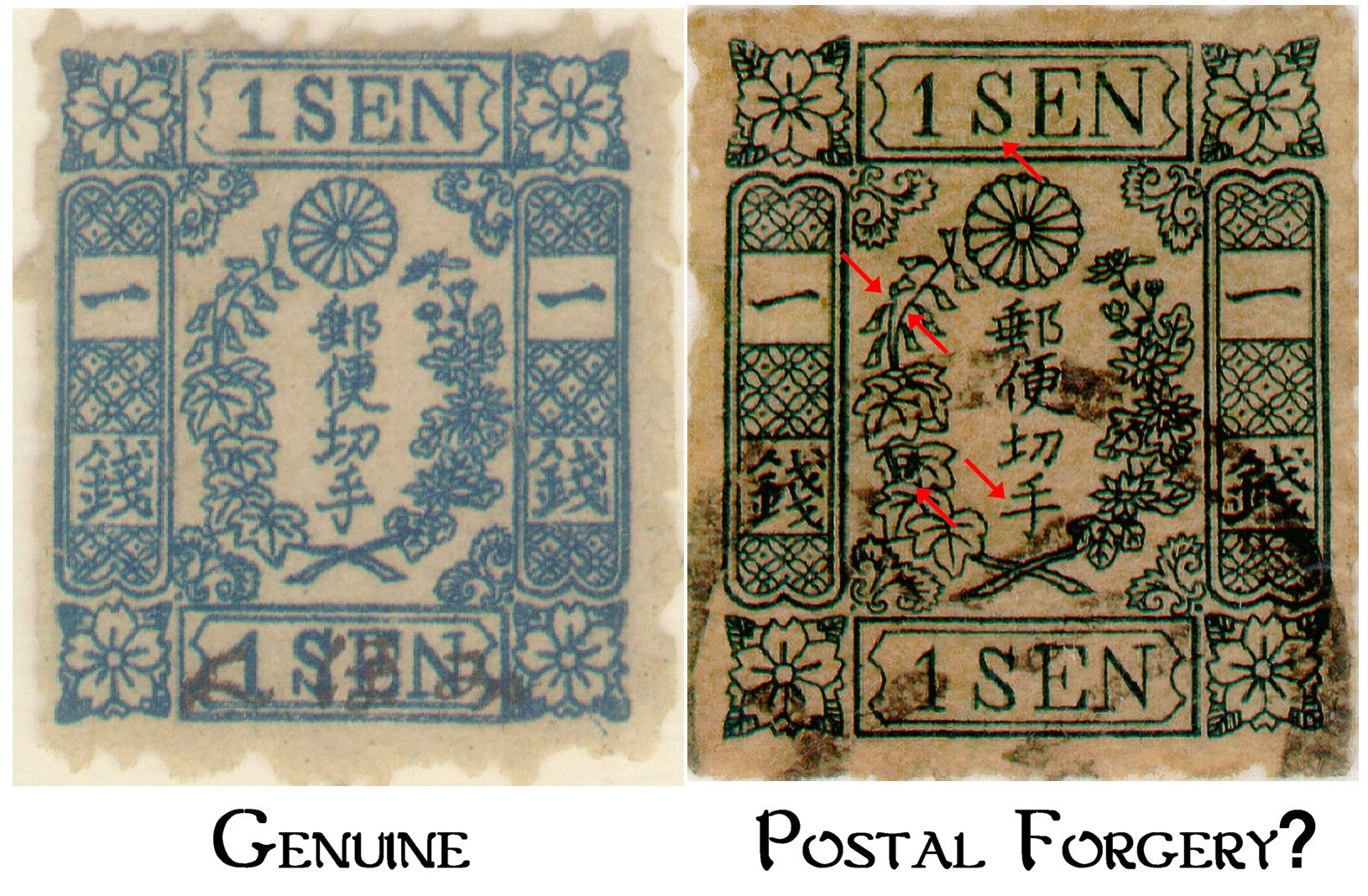 Other Characteristics that help when the dot can not been seen: 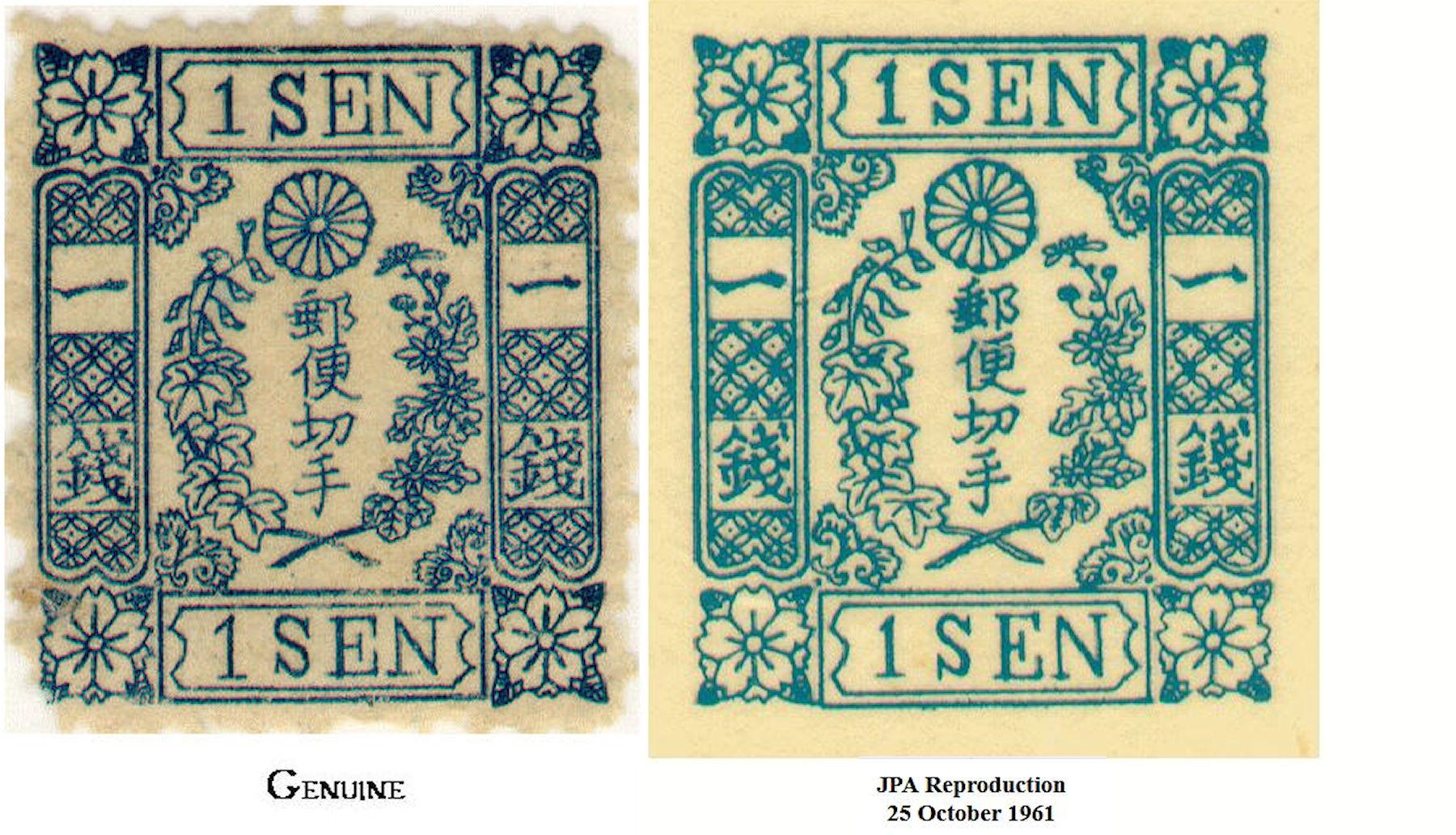 This stamp reproduces the genuine issue of 23 August 1872 on laid paper.  The sheet is on vertical laid paper. 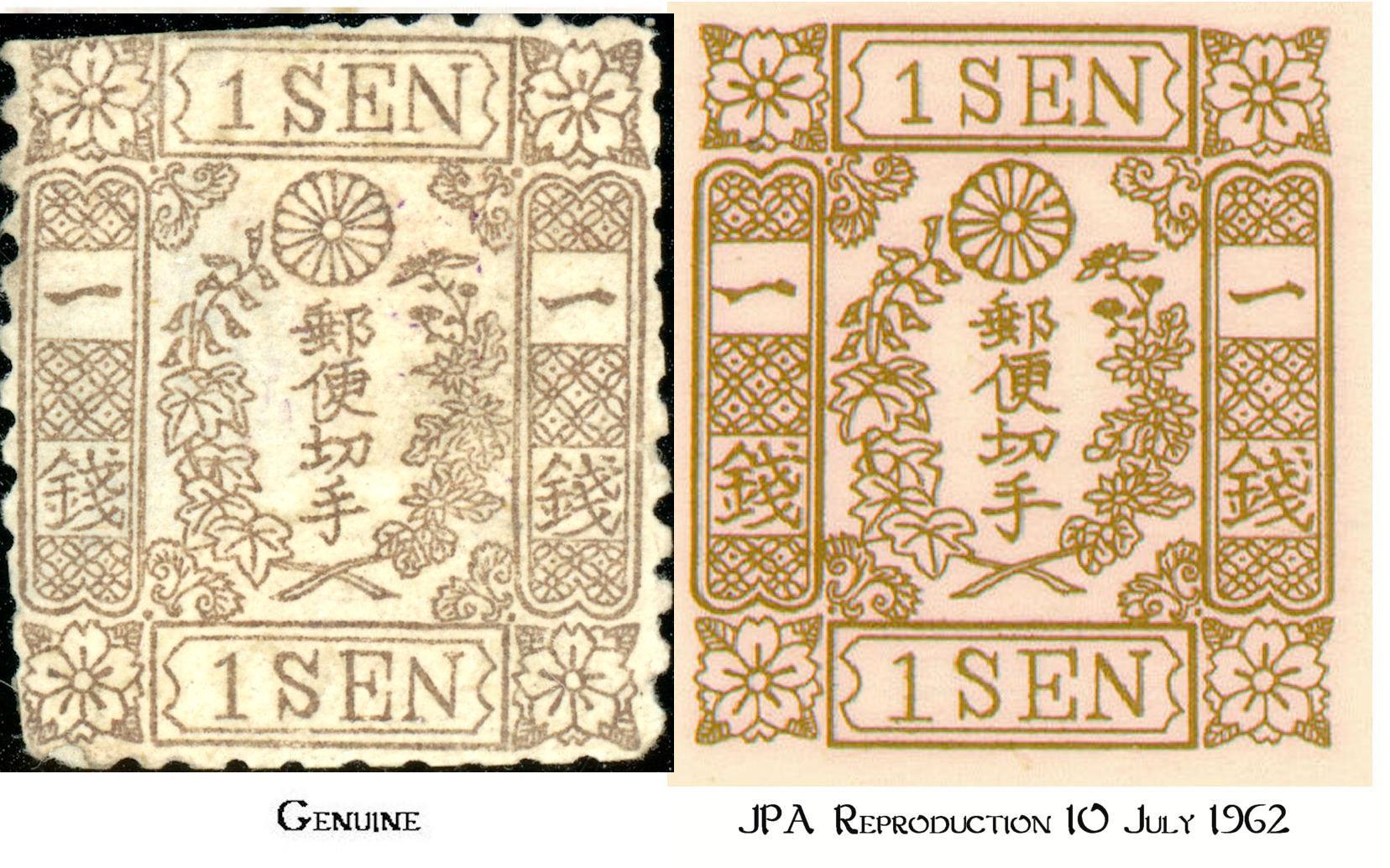 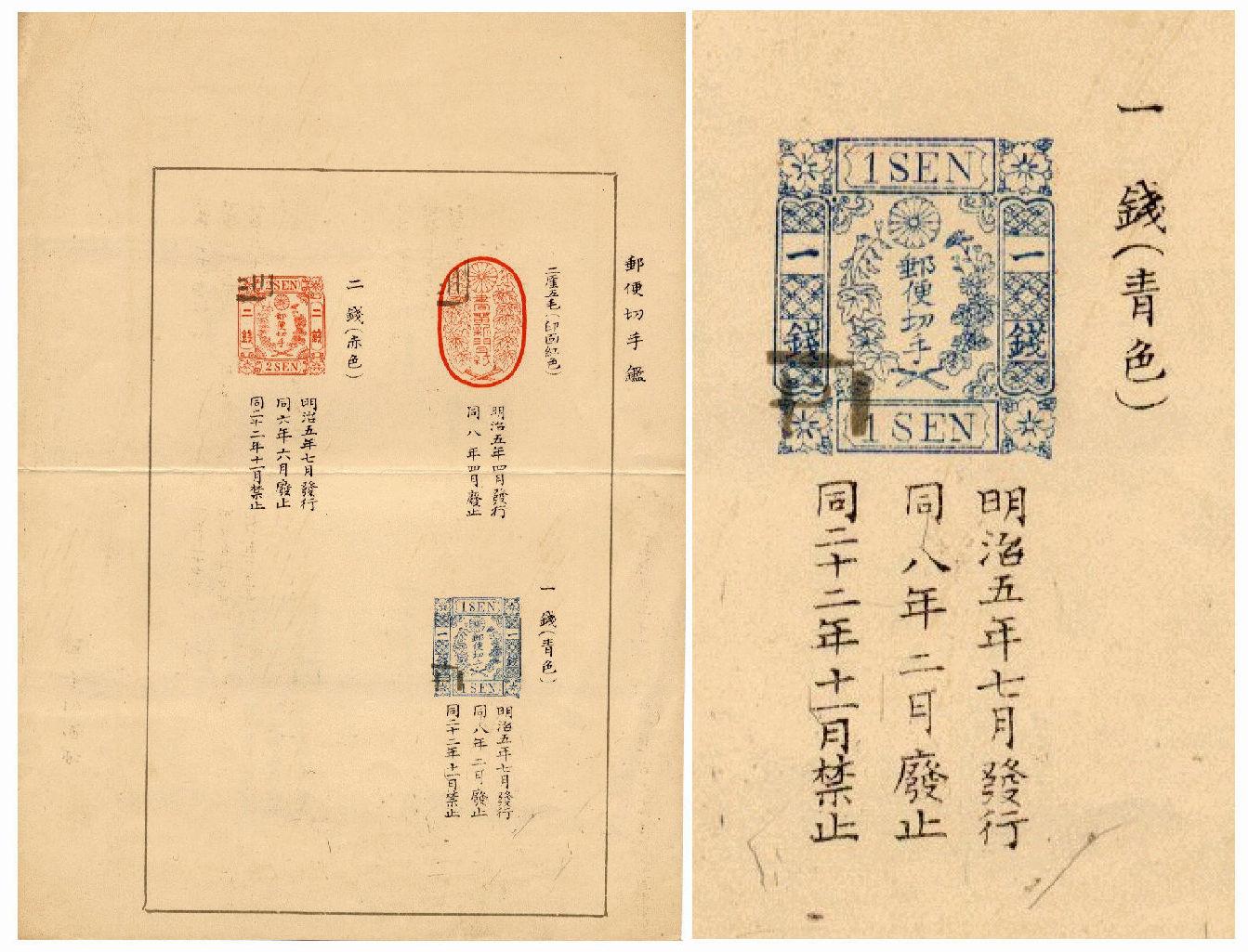 This 1 sen blue is found in sheet 2 included with the 1907 issue of the Communications Law Monthly Report.  It has the type 2 cancel. Both the sheet and the stamp are shown at the left.