One of the best ways to start learning how to determine whether a stamp is genuine or forged is to learn the basics of the genuine stamp and watch for differences in the stamp in question.   Except when the forgery is easily identified by the “signed marking”  (sankō, mozō: or mihon) or the forgery is very crude,  a genuine stamps will be presented together with the forgery.  Since new forgeries can be made anytime, the best way to identify forgeries is to know the genuine stamp well. Remember  that any particular feature described as a feature of a forgery could also be a mistake (variety) in genuine stamp. In that case it’s other features that help make the determination of the true status of the stamp.  A good knowledge of the genuine is the essential.  some mysteries may never be solved to everyone’s satisfaction.  The opinion of experts is just an opinion and opinions can vary.  Fortunately the early forgers made enough mistakes so  most experts about most forgeries agree.

This study concerns itself with the early classic stamps of Japan:

The dragon stamps were first issued on 20 April 1871.  They were produced by hand-etched copper plates for engraved printing.  This means that each stamp in the etched plate was hand drawn and all have slight differences that can be identified. Because of this primitive production method, there are many errors and varieties found in the genuine stamps. Each sheet contained 40 stamps in an 8×5 array, and they were printed on native paper.​ This paper was usually very thin. Both laid and wove paper are found.  The 48 mon, the 100 mon, the 200 mon and the 500 mon dragon stamp had two plates each.  The mon values were printed with a second value plate for each vignette plate.

The  1 sen dragon:  Plate 1 and Plate 2 used the vignettes of the 100 mon dragon with new value plate. Plate 3 was a newly etched plate.

The 2 sen dragon:  Only Plate 2 of the 200 mon dragon vignette was used with a new value plate. Therefore the 2 sen always appear worn.

The 5 sen dragon:  Only Plate 2 for the 500 mon dragon vignette was used with a new value plate.  Again all the 5 sen have a somewhat worn impression.

Fortunately, for the process of identifying the forgeries, some of the values had “secret marks” that the forgers did not duplicate in their wares.

Forgeries of the Koban stamps are engraved or lithographed.

Cherry Blossom issues had a four year life.  The printers required many original plates for the Cherry Blossom issues to keep up with the expanded need.  Since no official record exists, the exact number of original plates for these issues is unknown.  There are over 100 different stamps in this series.  While probably the most plates for any one issue is the one sen blue which had 26 plates of 40 stamps–all hand-drawn.  For that stamp alone there were over 1000 different varieties.

Some of the stamps had secret marks, but many did not.  Where secret marks exist, they will be mentioned with the discussion of that particular stamp.

All of this issue has the Kiku (Chrysanthemum) Crest somewhere in the design.  If the stamp is genuine, there will be 16 petals in the crest and only 16.  Any other number is proof  that the stamp is a forgery.

Forgeries of the Cherry Blossom stamps are engraved or lithographed.

In 1876 Japanese stamp printing was revolutionized  by Edoardo Chiossone of Italy, who arrived in Japan in 1875 and was employed by Japan’s government printing bureau from then until he retired in 1891.

Chiossone was a skilled engraver, printer, and artist and introduced the latest European techniques for both engraving and relief printing.    He was both the designer and plate-maker for the Koban Series introduced in May 1876.  From a single die, he could make relief plates of 80 positions (later 100).  Unlike the old etched plates each position was identical and the plates could be used much longer and thus print a much larger number of stamps before being replaced.   This also means that there are fewer genuine varieties of Koban values and thus somewhat less to learn about identifying the forgeries.

The Koban stamps issued from 1876-1879 are usually referred to as the Old Koban Series.   The three Koban stamps issued in 1883 in response to the Universal Postal Union’s decision that the stamps of all countries intended for the prepayment of international basic rates for printed matter, postcards , and letters should be in green, red, and blue respectively are called UPU Koban.  Koban issues from 1888-1892 are referred to the New Koban Series.

The koban was an elongated gold coin with a wide range of values. It was used between 1609 – 1870. For this reason the series of stamps has become known to collectors as the Koban Series.  Forgeries of the Koban stamps are engraved or lithographed. 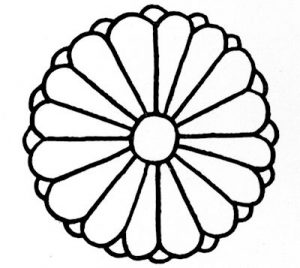 Both the genuine Cherry Blossom Issues and the Koban issues have the Kiku (Chrysanthemum) Crest in the design.  The genuine crest has 16 ray florets or petals. Forgeries often have 16 but 13, 14, 15, and 17 are common on the Cherry Blossom issues.  The Koban issues also have the crest, but there are few known forgeries with other than the 16 petals.   Any number of petals other than 16 on a stamp of either issue, is proof  that the stamp is a forgery.

There are many stamps that need discussion but some can be looked at together.  Those that can be discussed together have the same important characteristics.  For instance the 48 mon dragon stamp, Scott #1 and the 1/2 sen dragon stamp Scott #5, have the same vignette.  Only the value plate was changed.

When the “easy to recognize” forgeries have been weeded out, an expert opinion can be obtained on the remaining stamps from the International Society for Japanese Philately for as little as $1.00 each without certificate.

The first and easiest way to identify a forgery is to determine whether or not the stamp bears the inscription labeling it as an imitation.  These are referred to as “signed markings”.  A very large percentage of the forgeries of Japanese stamps do bear such  inscriptions.  The most common of these inscriptions is sankō, followed by mozō.  The least common is mihon which was also used on genuine stamps to indicate “specimen”.
They can be:

Almost all of the graphics on this site use a “lightbox” that is;  hover over the graphic and a + will appear, click on the + to enlarge the graphic.  To reduce size again, click on the light x in the upper right corner. 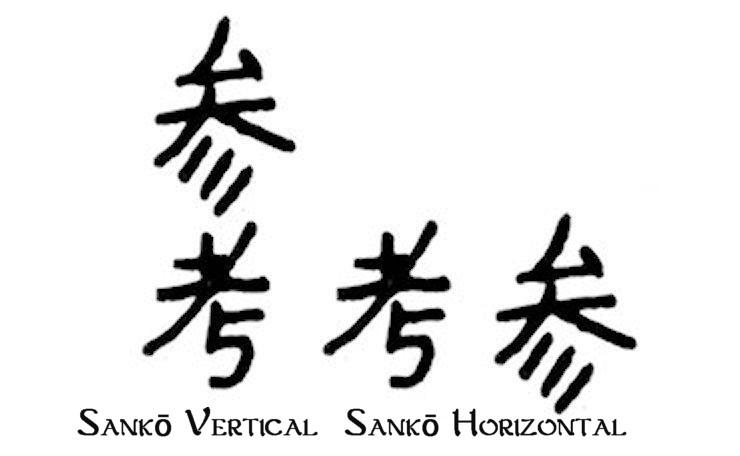 San-kō: (top to bottom or right to left) meaning “reference”.  Marking only on forgeries. 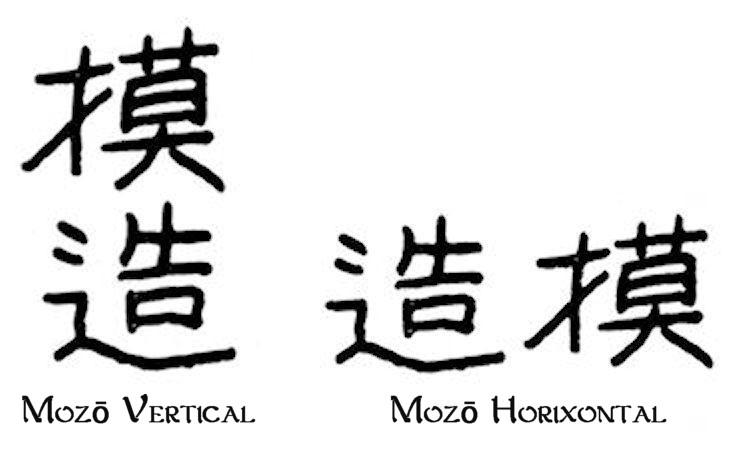 Mo-zō: (top to bottom or right to left) meaning “reference”. Marking only on forgeries. 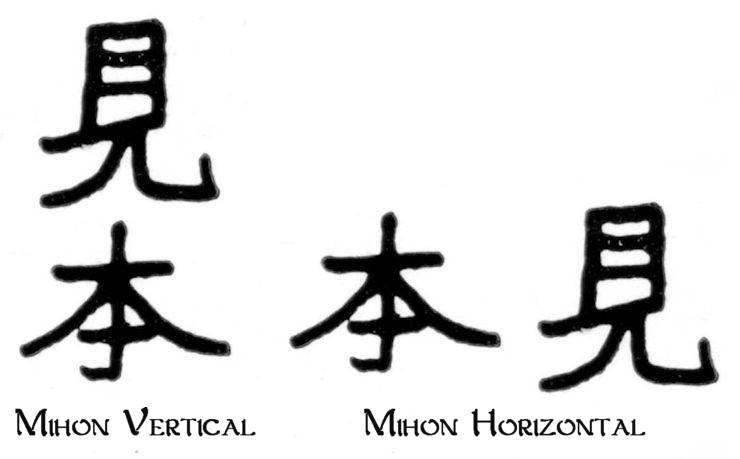 Mi-hon (Kanji): (top to bottom or right to left) meaning “sample” or “specimen”. Marking found on both genuine and forgeries. 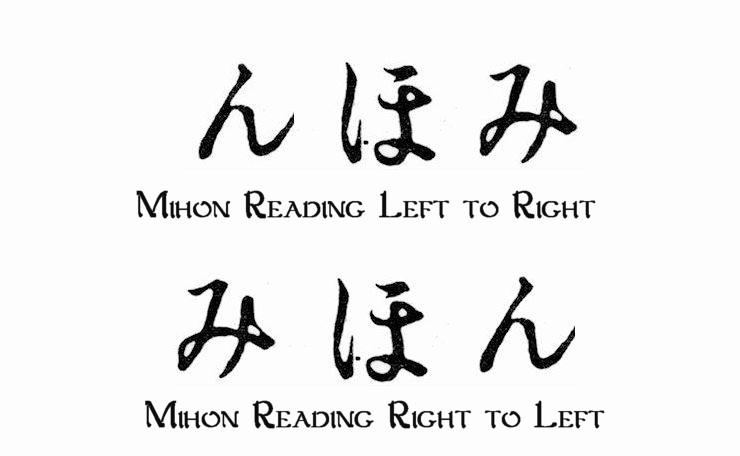