There are four major forgers (Hirose, Maeda, Spiro, and Wada) of Japanese stamps and between them they made and sold thousands of fakes in the late 1800’s and early 1900’s.  There are other less known forgers and some that have never been identified.  Two of these are identified by name (Kasahara and Ramsden).

At one time, one could expect to find that 95% of stamps between Scott 1-79 in a general collection of stamps would be forgeries.  Constant weeding of these forgeries by expert committees makes the situation a little better today.  But forgeries are still found for sale by reputable dealers and other sources that don’t know what they are selling.  The buyer must beware, and should learn how to recognize the most common of these forgeries for himself/herself.   To make matters worse, in more recent years, some of the classic stamps were reproduced as souvenirs   Some, including the Japanese ministry, produced reproductions in celebration of events.  These reproductions, in their original format are easy to recognize, but if the original format is manipulated  (perforated, paper thinned etc.), these reproductions can become very deceptive.

A little about the known forgers is found below.  Most of  the information is taken from Varro E. Tyler’s book titled Philatelic Forgers, Their Lives and Works, published in 1991(see bibliography).  Some new discoveries after this book was published have been published in Japanese Philately.

In 2002, the International Society for Japanese Philately published a CD Rom and included all known forgeries as of that date  with an estimate that there are 1800 different forgeries pictured.  The study can be purchased from the ISJP on either the original CD Rom or a Flash Drive.  Any new forgeries discovered since 2002 are published on the ISJP site at https://isjp.org/forgery-cd.

Although little in known about Hirose, his forgeries were first learned about by European collectors in 1894 in an article in German.

The forgeries of the 1871-1872 Dragon Stamps were produced in large sheets of 48 (6 x 8). Two different engraved dies were employed, one of which was retouched. About five different forged cancels were used.  These forgeries are not as numerous as those of Maeda and Wada but they are among the most deceptive.

Hirose also produced forgeries of 13 different stamps of the Cherry Blossom issues (1872-1873).  Most had two different designs and were printed in small sheets of two.

Two exceptions are known. The first is the 30 sen gray denomination, which exists in a sheet of one stamp containing the only known Hirose design for this denomination.

These are all excellent forgeries and have deceived many collectors and dealers for years and years.

Little is known about Kasahara but the forgeries that are attributed to him are very skillful and very dangerous forgeries.  Only the Dragon stamps are known forged by this man. All eight denominations identified so far are of a different design but are assumed to have a common source. The cancellations which appear on these forgeries are good imitations of the boxed strikes used on the genuine stamps. In 1930, Yoshida Ichiro reported in the Japanese philatelic press that stamps of most exquisite workmanship were forged by an etcher named Kasahara, and it is thought that he made these skillful forgeries. These forgeries are also described in ISJP Monograph No .4 p 7-8.

Ron Casey points out that there was no forger named Kamigata and that this name was used by the ISJP in its Monograph 17 to identify a group of forgeries that were being sold by the Kamigataya (Kamigata company).  A forger by the name of Maeda Kihei was responsible for all the forgeries previously attributed to Kamigata.  The Kamigataya was a Tokyo stamp dealer and bookseller who, in the early 1890’s, sold forgeries of Japan, China, Shanghai, Taiwan and Korea that were prepared to order.  Many of the forgeries range from relatively crude early productions to more sophisticated later imitations.  There is some evidence that Maeda Kihei was an owner of Kamigataya.

This study redesignates all the Japanese forgeries previously attributed to Kamigata to Maeda forgeries.  The imitations the Kamigataya sold included the Dragon, Cherry Blossoms and Old Koban issues of 1871-1879.  At least one cancellation type used on these Dragon stamps was also used by Wada, Kotaro.  This implies a link between the two.  By 1902 the Kamigataya was offering a wide variety of “tourist sheets” of countries other than Japan.  While it was often believed that forgeries sold by the Kamigataya of other countries of the world as well as those of Japan were the work of others, the forgeries sold certainly rates this firm as one of the most prolific of stamp forgery distributors on a worldwide basis.

There is a vast range in workmanship in the forgeries attributed to Maeda. Some are very crude characterized by incomplete and carelessly created details. Later imitations are more sophisticated with markedly angular and fully formed leaves, flowers and lettering.  All Maeda forgeries were lithographed, with and without sankō, imperforate and perforate.  He forged the Dragons, the Cherry Blossoms, and the old Koban stamps of Japan.

Philip Spiro was head of the prominent lithographic firm Spiro Brothers in Hamburg, Germany, producing a wide range of printed items from Sunday School cards to labels for beer bottles.  In 1864, the company began to make lithographic forgeries of postage stamps and for the next 15 years produced about 500 varieties worldwide.  These were usually printed in sheets of 25 (5×5), perforated if required but ungummed, and sold either unused or used with as many as five different cancels per sheet.  Their forgeries were advertised and sold as “imitated postage stamps for collections,” and proved to be very popular and apparently profitable merchandise.  However, many of the dealers to whom the Spiros sold their products had no compunctions about representing them as genuine to their customers.

The Spiros turned their attention to Japanese postage stamps sometime prior to October, 1875. Correspondence from Japan was scarce in those early days, and as a result the spaces reserved for these stamps remained vacant in most collector’s albums. This no doubt stimulated the Spiro Brothers to start printing facsimiles under the philanthropic pretext of helping collectors fill those ugly open spaces. The first comprehensive philatelic descriptions of the Spiro Japanese forgeries appeared in a series of articles titled the “Spud Papers” which were published in several English stamp periodicals between 1871 and 1881. Later these articles were combined and republished.

It now appears that the Spiros forged 34 basic varieties of Japanese stamps, of which seven were produced in two types, plus one error of color not approximating an issued stamp, making a total of 42 distinct and collectable varieties in all. Of these, 22 were described in minute detail by the Reverend Robert B. Earee in the third edition of Album Weeds, How to Detect Forged Stamps.

The stamps of Japan he forged include the Dragon, the Cherry Blossoms, and the old Koban.  All were lithographed.

Many Spiro forgeries may be recognized readily and easily by the cancellations which were almost always applied by the manufacturer. A limited variety of cancellations, only a few of which are found on genuine Japanese stamps, exist on these forgeries. Since the cancels were applied in black ink, more or less at random to entire sheets prior to separation of the stamps, parts of two or more cancels of the same or different types may appear on a single stamp. One of his famous forged cancellations spelled “Yokohama” in roman letters as “Jokohama”. The most frequently used hand stamps are: 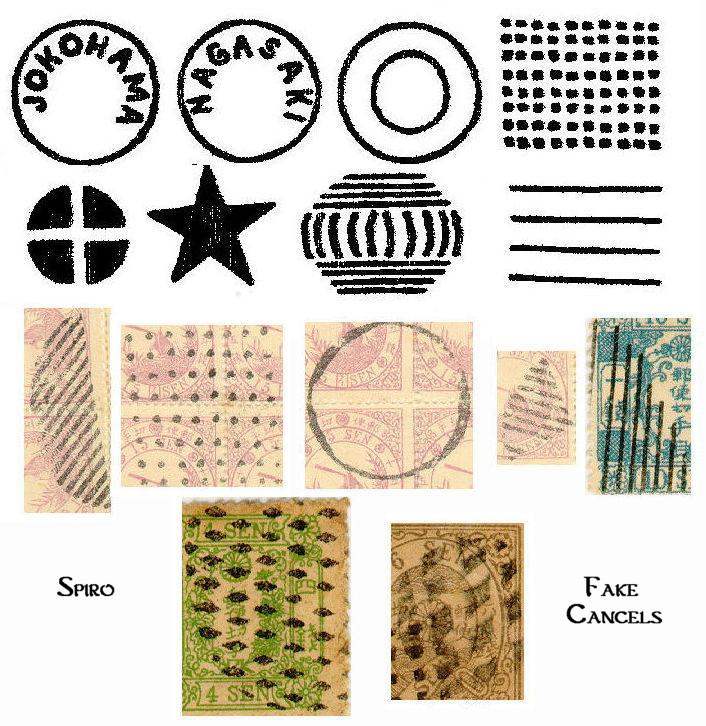 “H. R. Ramsden was an English resident of Yokohama, where he served as honorary Cuban consul. He was very prominent in philatelic circles in that city during the early years of this century. From January 1913 until his death in October 1914, he was the editor of The Numismatic and Philatelic Journal of Japan, the first real philatelic magazine in that country.

“Sometime during this period, Ramsden prepared sheets of lithographed forgeries of a least eight different stamps of the Japanese Cherry Blossom stamps. The counterfeits were printed in an unusual format, consisting of 108 stamps (12 x 9) on grayish wove paper, and line perforated 10½. Two of the sheets were displayed at a philatelic exhibition in Tokyo in 1958…”

Wada, Kotaro of Tokyo was the premier forger of Japanese classic stamps.  During the 1890’s and the first decade of the 20th century, Wada prepared hundred of thousands of good to excellent counterfeits.  Wada was a proprietor of a Tokyo curio shop and many of his forgeries were sold in the harbor district to foreign travelers on sheets in the form of collections.  These sheets became known as “tourist sheets.”  His stamps were also sold to American and European dealers in bulk.

Wada forged the Dragon, Cherry Blossom, and old Koban issues of Japan.  Most of his forgeries were printed from small copper plate of six (3×2) or eight (4×2) with each design hand-etched.  Usually, two or three plates were prepared for each denomination.  Some of the forgeries were signed with sankō or mozō, meaning imitation, in small kanji characters.  Some were cancelled with a marking containing the characters for mozō.  Still others, particularly his later and better efforts, had no such markings.  Some of his early plates with these marking have later states with the markings removed.

Some of Wada’s plates of the Koban issue were lithographed from one die.  Some of these had printed cancels. Others had more normal appearing cancels.  These lithograph sheets were of unknown size but with evidence that they were larger than the plates described above. Possibly, they had printed cancels and the more normal cancels on the the same sheet.  Wada also made two interesting cancels that incorporated his name as part of the cancel.  These two cancels are shown below:

Type A:  The name Wada appears in the center of a double circle postmark.  Between the circles, using about three-quarters of the circumference, and reading clockwise, appear kanji characters which are pronounced (gogo . Meiji-jūgo . ku) which means “afternoon – Meiji 15 (1882) .  9 (September).”   In genuine cancels, the remaining portion of the circle usually contains the province in which the town is located, but the Wada forgeries are blank.

Type B:  This is a double circle telegraph cancellation with no characters appearing in the central circle.  The characters between the two circles, reading in a clockwise are pronounced  “Wada denshin kyoku”  which means “Wada Telegraph Office.”

Wada stopped marketing forgeries in 1911 and retired a year later.  His plates were destroyed in the earthquake and fire in 1923.  Wada’s creations survive in untold numbers and outnumber the genuine stamps found in general collections by a ratio of 10 to 1.

Dragon and Cherry Blossom Forgeries made in huge numbers in the 1950’s until th3 1960’s.  Click here for more information.